Jenson Button has signed a deal with Williams to become a senior advisor on a multi-year deal.

Button returns to the team that gave him his break in Formula 1 back in 2000 21 years ago alongside Ralf Schumacher.

In his new position, the 2009 world champion will provide support away from and at selected races in 2021. He will also help development drivers in the Williams stable.

Button will continue to appear on Sky Sports F1 in his punditry position alongside his new role.

“I am so delighted to once again be able to say that I’ve signed for Williams,” Button said. “Back when I was 19 it was a moment that changed my life and, despite the fact it was over 20 years ago, I already feel like I never really left. 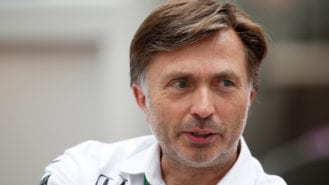 “Sir Frank Williams showed faith in me which I will be eternally grateful for and I am incredibly excited to have the chance to come back and help the team as it strives once more for success. There’s a lot of hard work to be done but I have no doubt the future is incredibly bright for this fantastic team and I can’t wait to get started.”

Following his stint with BMW Williams, Button moved to Benetton, BAR, Honda and Brawn GP where he won his championship. Following his title-winning season, he spent the remaining years of his career with McLaren, claiming 15 race wins and 50 podiums throughout his career.

New Williams CEO Jost Capito said that bringing Button back into the team was a great opportunity and that his experience in the sport would help guide the team forward in 2021 and beyond.

“Bringing Jenson back on board is another positive step to help us move forward as a team both on and off track,” he said.

“Jenson has always been a friend of the team and so it is great to welcome him back into the Williams family. Back in 2000, Sir Frank saw the promising talent Jenson had as a driver and gave him his first opportunity in F1. He more than fulfilled that initial promise throughout a glittering career that culminated in world championship glory. More recently, he has shown his acumen in both the business and broadcasting worlds and remains a widely respected figure in the paddock.

“All this experience will add another layer to our transformation both technically and as a business. I know everyone at Grove has huge respect for him and we’re delighted to start working with him.”