The latest in our Jim Clark series turns attentions Stateside 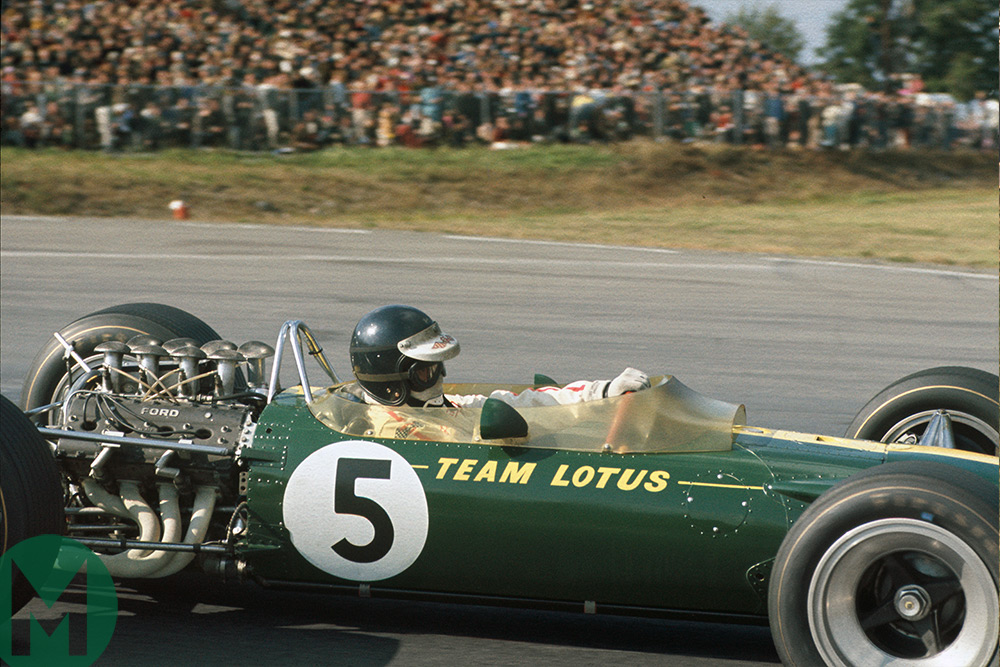 The moment chatty, savvy Jackie Stewart set foot in the United States – in August 1964 to race a Lotus Cortina in a 12-hour enduro – he knew that here was the Land of Opportunity.

And plenty of it, too.

His more reticent and naïve compatriot had taken a little more convincing. Jim Clark was excited by the prospect – back in November 1960 – but less enamoured with its reality.

His American odyssey didn’t begin well, to be honest: he finished last, 14 laps in arrears, because of several long stops for repairs after collecting spinning team-mate John Surtees in the early stages of the US Grand Prix at Riverside.

Eleven months later and still reeling from the tragic events of September’s Italian GP at Monza, he was delayed by oil leaking onto his clutch and finished seventh, at Watkins Glen.

His mood had lightened by February 1962 – after encouraging defeats of Stirling Moss in the winter Springbok Formula 1 series – and he drove Peter Berry’s Lotus Elite to fourth in class in the Daytona Continental Three Hours.

He also got his first taste of NASCAR after befriending Glenn ‘Fireball’ Roberts.

“These cars are as tight as a Grand Prix car, with no give in them,” wrote Clark in At the Wheel. “They accelerate like mad and seem to hang on in the corners.

“The big scare comes when someone starts drafting along the straights, with only 6in between. It scares the living daylights out of you.

“You have to be sensitive and accurate because once these cars start to go sideways you can’t stop them.

If he was charmed by the diversity of American racing – though he would politely decline a run in a Sprint Car – he was irked by its ballyhoo and arcane methods.

Directly after winning the 1962 US GP – following a battle with the BRM of title rival Graham Hill and despite clutch failure – Clark ran at Indianapolis for the first time.

He did so under the steely glare of officials and established drivers – “They treated me like a kid” – and found it rather a bore.

That he lapped at 143mph in a 1.5-litre had, however, made locals sit up and take note: Jack Brabham’s Cooper of 1961 had been a ‘funny car’; Lotus and Colin Chapman, who was openly dismissive of the resident front-engined ‘dinosaurs’, were deadly serious.

It would have been very easy for Clark to rile the crowd. He drove a green – a notoriously unlucky colour – car, fercrissakes!

Instead he won it over in defeat by keeping intense disappointment private and letting others debate whether winner Parnelli Jones – “He did a damn fine job” – should have been black-flagged for dropping oil.

Clark seemed unaffected by his talent and the circumstances and played by feel rather than by plan all the right cards at precisely the right times.

Days after Indy he raced a Lotus 23 sportscar sponsored by ‘Honest Ed’ of Toronto bargain basement fame; and he would decline to lap second-placed AJ Foyt after dominating August’s Tony Bettenhausen 200 Indycar race at the Milwaukee Mile.

He wasn’t a Beatle – though he had the hair and the smile for it – but he was an important contributor to America’s sudden mania for all things British.

Not that he had much to show for it in 1964: a class victory in a Lotus Cortina at the Sebring Three Hours and third place in the LA Times GP at Riverside; Chapman never would provide him with a top-notch Group 7 ‘big banger’.


Indy had been a disaster. The unproven Dunlops that Chapman insisted using put Clark on pole but led to his early retirement when vibration from a chunking left-rear caused its suspension to collapse.

This 500 thing was not as easy as it looked.

Although Clark made it look that way in 1965 – leading all but 10 laps: his victory was a watershed achieved with absolute economy of effort and movement.

Though beaten (probably) by Graham Hill’s Lola in 1966, it was Clark’s gathering of two high-speed spins – “STP: spinning takes practice!” – that caught the eye.

The guy just had the knack.

At Watkins Glen that year he scored the only GP win for a car powered by BRM’s overblown H16. The following year he won with a rear wheel dangling.

Clark was by now more worldly and accepting of the American ballyhoo and press intrusion as the cause and effect of unmatched enthusiasm and putting the show in the business.

All those dollars won helped: a condo in Bermuda – albeit in tax exile and with much stuff left unpacked – and private ’planes – the first of which disappeared over the Atlantic while being delivered.

By putting greater value – and not just financial – on his services, his relationship with Chapman was evolving in turn.

The increasingly independent Scot jumped at Bill France’s offer – Stewart baulked over the deal’s finances – of a Holman-Moody Ford at Rockingham’s American 500 in October 1967: he qualified 25th – the right-front had come adrift during his first attempt! – and was running 12th just past quarter-distance when the 427ci V8 blew its stack.

He also accepted Oregon Indycar constructor Rolla Vollstedt’s offer for Riverside’s Rex Mays 300 in November: Clark’s first single-seater outing in a car other than a Lotus since Boxing Day Brands, 1959.

“Colin Chapman wasn’t involved in any way, shape or from.

“Jimmy was quick immediately – but eventually Dan [Gurney] set a faster time. But when I asked Jimmy if he wanted me to ‘tip the can’, i.e. put more nitro in the tank, he said no: ‘When Dan has to pour 75 gallons [his Eagle’s V8 was a 5-litre stock-block as opposed to Clark’s race-bred 4.2] in for the race, we’ll be able to handle him.’

“And that’s how it worked out: Dan led from the start with Jimmy right behind and, when Dan eventually made a small mistake, Jimmy took the lead.

“Moments later, though, he missed a shift and tagged a valve.

“He was wonderful to work with. My team loved him because he was so easy-going; I don’t think he changed anything on the car other than to soften the rear springs.

“He told reporters that it was a very good car, which was nice to hear. He was really impressed with its wings.

“Actually you weren’t allowed wings as such, but I had a large, flat spoiler – about 2ft long and bent up at its back edge – over the engine; I also had what you might call winglets on either side of the nose.

“He thought these were really effective and they got him thinking about downforce.

“I really wanted him to race for me the following year…”

Clark would return to America in 1968 to test the car – the 4WD Lotus 56 turbine – that he was convinced would give him a second Indy 500 win.

An LA DJ urged, “If you are mourning the death of the great racer Jim Clark, put on your headlights.”

The freeways lit up.