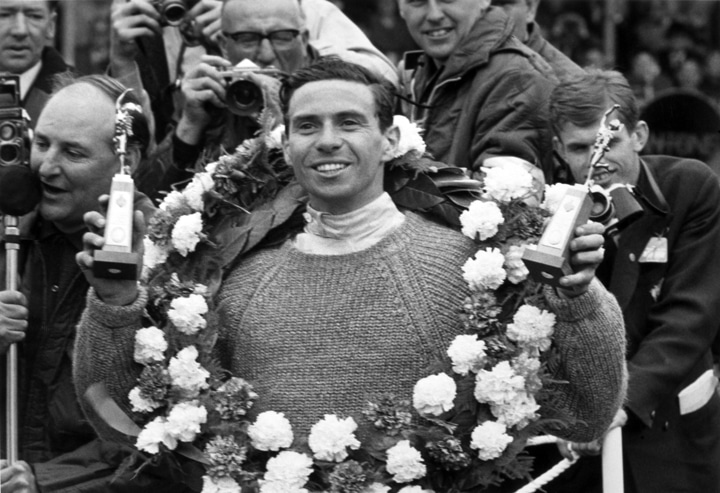 The greatest of all time for many, Jim Clark was killed at Hockenheim 48 years ago this week competing in Formula 2. As part of our British champions issue in 2012 Peter Windsor remembered Clark, including his introduction courtesy of Warwick Farm promoter Geoff Sykes.

In Brazil in 1985, Alain Prost continued McLaren’s run of victories that began at Brands Hatch the previous July. It was the team’s eighth in a row and Prost’s third. Nigel Mansell secured a third successive win of his own seven years later, as Williams dominated at Interlagos in 1992.

Denis Jenkinson enjoyed two International Trophy meetings at Silverstone, despite a “wind so cold even the brass monkeys stayed in the beer tent” in 1973. Jackie Stewart won the marquee race of what was the BRDC’s 25th race meeting. The following year, James Hunt won in Hesketh’s new 308 during what DSJ called “a splendid motoring garden party.” He even praised the traffic management…

Brands Hatch hosted its 1971 1000kms, with Andrea de Adamich and Henri Pescarolo claiming an overdue victory for Alfa-Romeo. At Monza in 1988, Jaguar’s Martin Brundle and Eddie Cheever managed their fuel to snatch a ‘beautifully-judged’ victory in the 1000kms from Sauber Mercedes.

American racer Frank Lockhart was born in 1903. Like Hawthorn, Lockhart’s career was brilliant but short. In just two seasons he won the Indy 500, at the age of 24 and at the first attempt, and twice finished runner-up in the championship.

Honda’s first Formula 1 driver, Ronnie Bucknum, was born this week in 1936. A surprise choice at the time, he accumulated two world championship points thanks to a fifth-place finish in Mexico 1965.

Walt Hansgen, who played such a large part in the making of Mark Donohue, died testing at Le Mans in 1966.