The second in a series of extracts this week from Jim Clark – The Best of the Best, written by David Tremayne and published by Evro publishing, available to order now

We pick up the 1963 Formula 1 season at Monza, race seven out of 10, with Jim Clark on the cusp of a maiden world championship 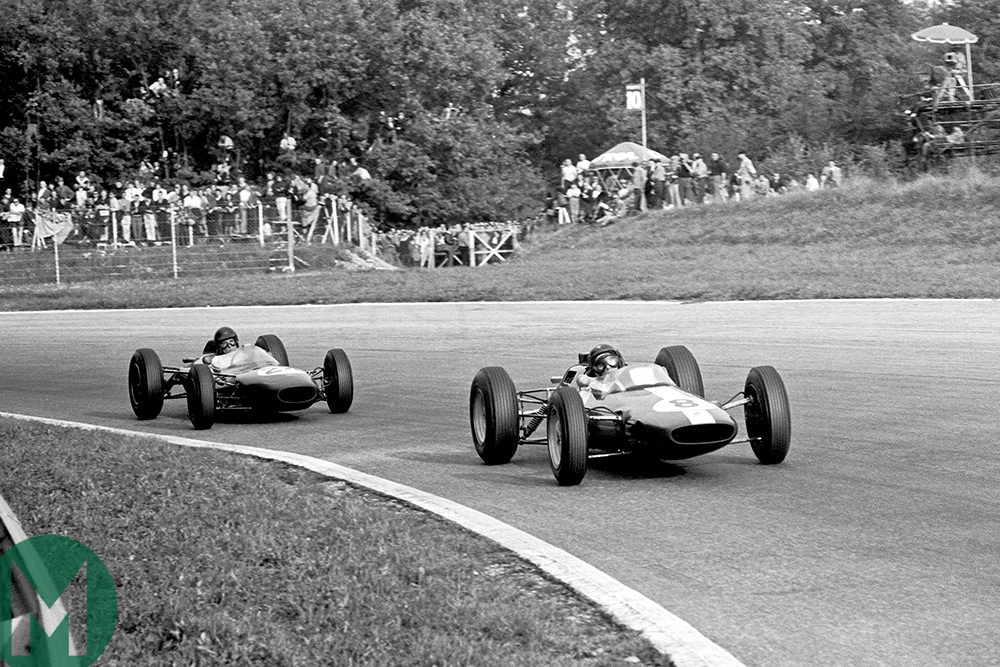 Jim admitted that he had misgivings prior to Monza, although mainly this time they concerned the opposition rather than the lingering effects of Wolfgang von Trips’s accident. Trevor Taylor had raced in the Mediterranean Grand Prix at Enna the week after Karlskoga while Jim was at Milwaukee, and reported that he had been blown off by Surtees’s winning Ferrari. On their home ground at Monza the red cars could be relied upon to show a lot of speed, and the BRMs were also strong on such a fast track. Trevor, however, wouldn’t be there to see them following a bad crash at Enna, so the promising Mike Spence was brought in as his substitute.

This time the organisers decided not to use the banking following several incidents on the first day of practice, including a nasty crash for popular ex-motorcyclist Bob Anderson. But even so, Surtees easily took pole from Hill, 1m 37.3sec against 1m 38.5sec, with Jim third on only 1m 39.0sec and Ginther alongside him on 1m 39.19sec. Gurney, Bandini and Brabham were right behind them. The auguries were not good, especially as Jim, following all sorts of problems in practice, had to go to the line in an untried car with a new engine and gearbox, and revised gear ratios and tyre sizes.

Surtees led into the first corner with Jim second, but Hill soon passed both of them and Jim went with him. Surtees then overtook the pair of them and by the third lap Jim felt comfortable chasing along in the Ferrari’s slipstream. Then he saw tell-tale signs of oil smoke coughing from the red car’s white exhausts, and after 16 laps Surtees’s race was over with piston failure.

With no tow to keep himself clear, Jim saw no point in stressing his equipment and eased back. Soon he was chasing Gurney and Hill, who went past him so quickly that he was almost caught out. But after struggling for a few laps to keep with them, he found his groove again as they indulged in a huge fight for the lead. Graham was the first to wilt, with clutch slip, and then Jim experienced first-hand how awkward Innes Ireland could be as the elder Scot still harboured resentment for the way in which Colin Chapman had fired him at the end of 1961.

As Jim tried to lap the BRP driver, Innes steadfastly blocked him. The BRP was much faster than the Lotus on the straights, so Jim had to get the job done in the corners. But Innes wasn’t interested in being helpful, as all his old feelings of rejection resurfaced. It was time for subterfuge.

Jim waited until Dan was really close behind him and making his own attempt to pass Innes. He then deliberately eased off and let Dan pass him. Innes, believing Dan still to be Jim, cut him off, and Dan was never keen on such behaviour. As he dealt with Innes, Jim overtook them both. It was a smart bit of work, but further indication that there really was no love lost between the two former team-mates.

Thereafter, as fuel feed problems beset Gurney, Jim sped home to a comfortable victory more than a minute ahead of Ginther, having let the BRM driver unlap himself, and thus made sure of his first World Championship in considerable style after his fifth win in seven races.

It was the greatest moment of his career so far, a culmination of everything he had put into his racing, justification of all the arguments against parental opposition. Validation of all the beliefs of his closest, most trusted friends, the people who had supported him from the very outset, who had believed they saw something great in what he was doing, no matter how fanciful he, and others, might have found that.