Invited by regular Lotus Elite oppo Graham Warner to drive a Gemini Mk2 for The Chequered Flag, the 23-year-old Borderer was claustrophobic in its cockpit and qualified mid-pack after reliability issues during practice.

At least he was doing better than the poor bloke in that “cigar tube on four wheels”. He was referring to Alan Stacey in the unpainted prototype of the first Lotus with the engine behind its driver.

Clark was pushed away last and finished eighth; Stacey, his engine a bitsa and suspension settings awry, spun in finishing 10th.

And this was after Clark had pranged, possibly because of rear suspension failure, an Elite: the first accident of his career in what turned out to be his last race in a car owned by friend and mentor Iain Scott Watson.

It was bitter at Goodwood in mid-March 1960 when Clark’s bearings ran during practice and his car had to be tipped on its side in the paddock so that new ones – bussed over from Chichester’s Ford dealer – could be fitted and the sump’s baffles rearranged.

Now he was the poor bloke in that cigar tube on four wheels: a Lotus 18.

What happened next set the single-seater tone for more than 20 years: Clark’s winning a 10–lapper for Team Lotus in a car powered by a Ford engine tuned by Cosworth Engineering. 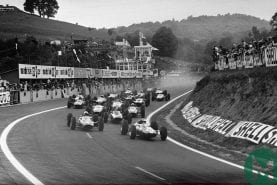 The secret to Jim Clark's speed

It’s a glimpse but a telling one. Just over nine minutes into the below film of the 1965 French Grand Prix is footage of the top guns – bar an…

His deal was for Junior and Formula 2 – he’d signed with Aston Martin for Formula 1 – and April would see him win at Oulton Park and Goodwood’s Chichester Trophy.

Between times he impressed on F2 debut by setting the fastest Lotus time in practice for the Brussels Grand Prix in the team’s “old hack”. For this he was ‘awarded’ the 18 – “too new to go fast” – originally slated for team leader Innes Ireland. Its Climax ‘four’ vented within a half-dozen laps.

The month ended with a dip at Aintree, Clark spinning from the Junior lead at the last corner because of a stuck throttle and being required to hand his car to Ireland during the F2 ‘200’.

May was a blip, too.

Although Clark won the Junior support to the International Trophy at Silverstone, his “terrible twins” team-mate Trevor Taylor had been leading comfortably when his engine overheated just before half-distance. And at the Monaco GP support an HT lead came adrift when Clark was miles in front.

“Are you on the same lap?” mouthed Clark. The steely look was all the answer he needed.

He would make his F1 debut the following weekend nevertheless.

Aston Martin’s GP project had long been too little, too late and the 1960 Dutch GP was no different. Just one of its front-engine DBR4s was ready for Roy Salvadori to race – and even that would be withdrawn because of a dispute over start money.

Lotus boss Colin Chapman seized the opportunity to put the surplus Clark in his third car: he was battling BRM’s Graham Hill for fourth when the 18’s transmission failed.

A fortnight later he finished fifth in the Belgian GP – yet couldn’t have cared less. Not only had he swerved around the “rag doll” that was the mortally injured Chris Bristow but also team-mate Stacey had been killed in a freak accident.

Not for the first time at Spa, Clark questioned his motives.

Third place at Le Mans – sharing Border Reivers’ Aston Martin DBR1 with Salvadori – and fifth in the French GP at Reims lightened his mood. Clark now felt he belonged – more so than he had imagined possible – and was beginning to understand the depth of his gift.

This almost caught him out at the Solituderennen in late July. Slowing to allow Taylor to close in the closing stages, he encountered an interloper: Count Stephen Ouvaroff in Inter Auto Corse’s Lotus 18.

“Are you on the same lap?” mouthed Clark. The steely look of the Russo-Aussie was all the answer he needed.

Taylor wondered what the fuss was about when Clark tore off in fruitful pursuit – and would be surprised to discover that he had finished third rather than second.

Clark’s F2 South German GP at the same meeting saw him start from pole and lead until a misfire caused by a leaking head gasket and resulting in a stop for water plunged him to an eventual eighth. 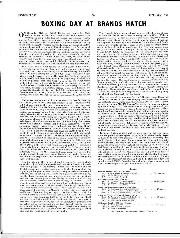 On December 27th the British Racing and Sports Car Club took a chance on the winter weather and held a mixed race meeting on the popular Kentish circuit. An excellent…

August brought him: another Junior victory at Brands Hatch – and a frantic lead battle with Jack Brabham’s Cooper in the headline F1 Guards Trophy before another gearbox failure; his first world championship podium: third in the Portuguese GP at Oporto despite a dicky tummy and a ‘start money special’ after a heavy practice accident; and his maiden F2 victory – four-tenths ahead of Dan Gurney’s privateer Lotus 18 – at Brands Hatch’s Kentish 100.

It also brought him Junior defeats to Taylor: the first at Goodwood, the other at Brands Hatch, where Clark spun out of the lead at Dingle Dell and ‘Yorkshire Trev’ worked through from the back of the grid.

Though Clark would win at September’s meetings at Snetterton and Oulton Park – where he looked likely to punch back-marker Brian Naylor after their tangle in the F1 Gold Cup – Taylor was a very handy opponent, as evinced by their joint winning of the BRDC Motor Racing Formula Junior Championship.

But already it was clear who was the best bet – even though Clark had slipped to second behind Ireland in Snetterton’s F1 Lombank Trophy when he braked as though he were in the Junior.

His 1960 Boxing Day at Brands Hatch – a victory that secured the venue’s John Davy British Formula Junior Championship – was a cheery celebration of his graduation.

He had, however, a confession to make. In At the Wheel, published 1964, Clark wrote: “Though I enjoyed some of the races I had I didn’t really like this formula, for I had been used to big powerful sports cars… and the Juniors were very anti-climatic.”

And though he had outgrown it quickly, Formula Junior had been a vital rung in what had become an apparently inexorably rapid ascent.