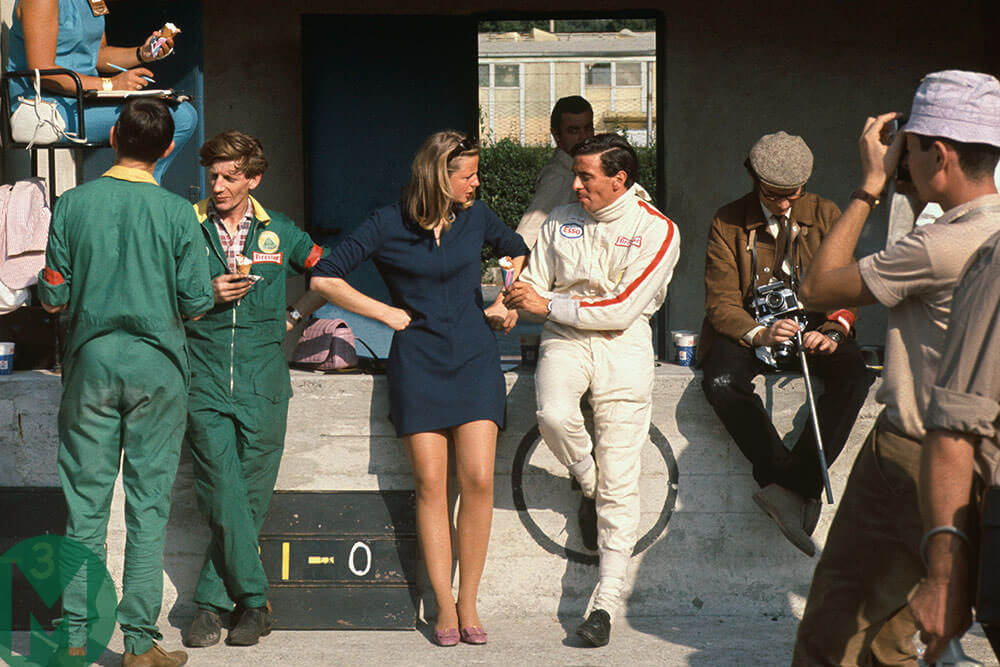 What would he have made of the brazen world of Formula 1 now? Something of a Sebastian Vettel off-track, perhaps, out of the limelight and living his own contented life.

Jim Clark, by all accounts, was a quiet and unassuming boy from the farm. It’s a picture that’s been built up piecemeal through history and via his contemporaries, owing to that fateful day at Hockenheim, 50 years ago this coming Saturday.

And as the many retrospectives this week have shown, his legacy has an emotive hold on motor racing fans the world over.

You suspect that all this, this deity-like regard, would have come as quite an embarrassment and surprise to Jim – not Jimmy, unless you knew him well: “He was annoyed when people who didn’t know him well called him Jimmy,” says Richard (definitely not Dickie) Attwood. And it was ‘Jim’ to his family too, according to long-time girlfriend Sally Swart.

As Sir Stirling Moss recalled in Andrew Tulloch’s Grand Prix Legend, “He appeared unaware of how good he really was and never traded on his growing fame.”

That was evident even on the evening of April 6, 1968, when he and Kurt Ahrens had broken down on the way home from a German television studio. “We got to a gas station and were looking for money,” said Ahrens. “The owner didn’t believe Jim was a champion. He didn’t know who he was!”

Time, for people held in similar esteem, often massages over any misgivings or missteps in character. But for Clark there’s little to call on at all.

There are the tax exile years, perhaps, but even his emigration played on his mind, feeling he had let his father down. The result of good advice given and carried out badly, his life outside Britain wreaked havoc for the homely Scot and left him rarely able to return.

The infamous BBC interview, wherein Clark lost his temper, was a one-off show of tetchiness. He was a man without a bad word to say about anyone, say many, and that seems sincere.

“He would never do anything behind your back,” his team-mate Trevor Taylor said in 1981. “He would rather help you than hurt you.”

That passiveness was possibly most obvious in his loyalty to Colin Chapman, whose relentless pursuit of victory and innovation put Clark forever on the edge of danger. As Andrew Frankel elucidated earlier this week, Clark either won or his car expired. And yet Clark resisted any public shows of discontent, which is a mark of the man. If the car wasn’t right he’d simply drive around the problem. He would at times confide in Taylor that he was concerned by Lotus’s continuing failures, but those seem to be his few open moments. There were no outbursts, no petulance, no discontent.

His confidence in Taylor or anyone else was certainly out of the norm. “I found Jimmy quite a private person,” said Moss, “a bit of an introvert. If we were all larking about or talking about girls, he didn’t really join in.”

Sir Jackie Stewart concurred, in Eric Dymock’s Jim Clark: “There were quite a lot of things that you could not discuss with Jim. You didn’t talk about money, you didn’t talk about the dangers of motor racing. He confined things like that to himself so much that you worried they were consuming him from inside. You could see he had anxiety on his shoulders. He had a stiffness in his shoulders. He was never what you could call a loose guy and it got worse as he got older.”

The proof was in his nails: they were forever being bitten, portraying that nervousness and anxiety.

Still, he was never broken out of his shy mould and reshaped into a tired despair. “He was one of nature’s gentlemen,” said Jim Endruweit, his mechanic. “He hardly ever raised his voice and he never threw his weight about. He inspired such great loyalty in everyone who worked for him; the lads would do anything for him, whatever it took.”

It was on the race track where he appeared most comfortable, and enjoying life most. Sir John Whitmore, British Saloon Car Championship winner and versatile racer in his own right, shared his flat with Clark in what became known ‘the Scottish Embassy’, not least when Stewart came to stay. He told Simon Taylor in 2012 that “[Clark] was very awkward in lots of ways when he wasn’t in a car, but as soon as he got behind the wheel he was totally focused. You could ask him detailed questions about a car’s behaviour and he’d be clear-minded and specific.”

Clark would show this retention of detail when he’d question journalists, even down to the last mile-per-hour quoted about his performance.

“Out of the car,” continued Whitmore, “he couldn’t make a decision to save his life. In the evening I’d say to him, ‘Do you want to go to a movie? Which restaurant do you want to go to?’ He could never make up his mind about anything. Sally Stokes wanted to marry him, but he couldn’t decide whether to marry her or not.

He was, at times, unable to decide between tea or coffee, and on public roads he had a notorious indecisiveness – supposedly he would sometimes drive headlong onto a verge between a fork in the road near his home because he couldn’t decide which way he should go. And yet driving a Sunbeam Talbot with such speed on the road brought him to the attention of local racer Ian Scott-Watson, who set Clark on his way in racing.

But as Stewart told Nigel Roebuck in 2008, “In a car, Jimmy liked to show off a bit, which was in total contrast to his normal character. He dreaded making speeches, for example, and you had to push him into a VIP lounge at an airport. ‘Don’t you understand,’ I’d say, ‘that these things make travelling a bit easier to take?’ He’d agree, but he’d never do it on his own.”

Yet he had become accustomed to the high life and travelling the world. Whether or not he was on the verge of retirement, or at least considering it (as has been debated), he had begun to enjoy it.