After reading Paul Fearnley’s excellent blog about David Bruce-Brown I thought, on the eve of Formula 1’s return to the United States, that I should add a few words about Jimmy Murphy.

Unlike Bruce-Brown, Murphy came from humble beginnings. Murphy was raised by his uncle and aunt on a ranch in Los Angeles after his father died in the San Francisco earthquake of 1906. He started his career as a riding mechanic with the Duesenberg team and won on his debut sitting beside Eddie O’Donnell in a 300-mile road race in Corona, sixty miles east of downtown LA. He also finished third in that year’s Vanderbilt Cup race in Santa Monica partnering wealthy driver Bill Weightman. 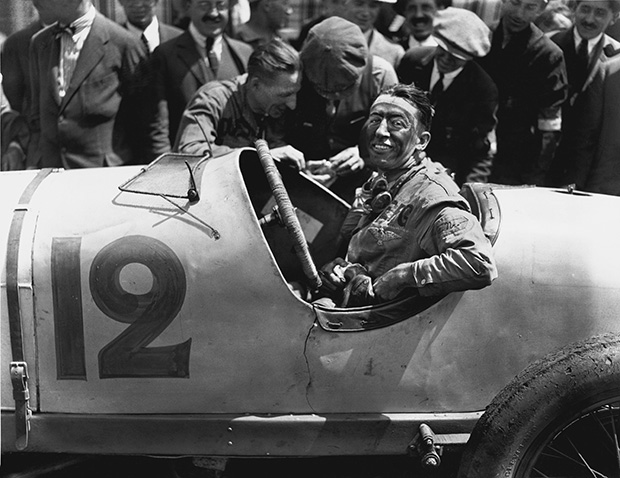 By 1919 Murphy had graduated to the driver’s seat and scored his first win in February of 1920 in the debut race at the sparkling new Los Angeles Speedway board track in Beverly Hills. The hometown boy became an instant national hero and during the height of the board track era between 1920-’24 Murphy won 19 races, including the 1922 Indy 500, and posthumously took the 1924 AAA national championship.

Murphy was a gentleman and fan favourite who was known as the ‘King of the Boards’. Tragically, he was killed at the height of his career in a dirt track race at Syracuse, New York in September, 1924.

Murphy is also renowned for his historic victory in the 1921 French Grand Prix. Driving for Fred and Augie Duesenberg’s team, Murphy scored the first all-American win in Grand Prix racing, a feat that would be duplicated only once again when Dan Gurney won the 1967 Belgian GP aboard his own All American Racers Eagle-Weslake F1 car.

Back in 1921, Murphy and the Duesenberg team chose to miss three AAA championship races in order to race in France, sailing from New York shortly after that year’s Indianapolis 500. Because of World War I, the world’s oldest Grand Prix race had not been run since 1914 and the Duesenberg brothers decided it was an occasion they could not miss. They took four cars to the French Grand Prix’s revival, proudly painted in America’s white and blue international racing colours. 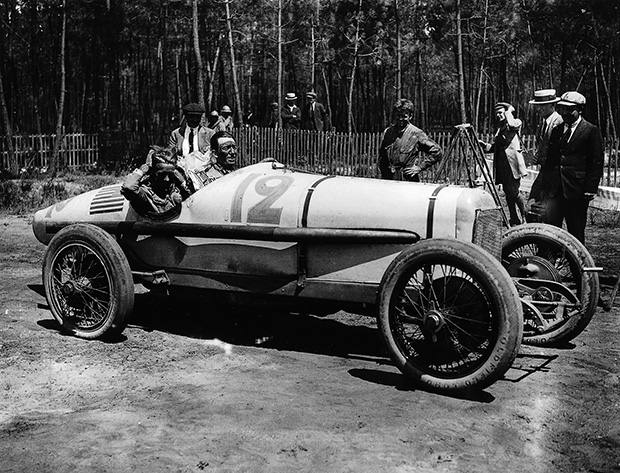 Murphy’s teammates in France were Joe Boyer who would go on to win the 1924 Indy 500, veteran French driver Albert Guyot, and wealthy Frenchman Louis Inghibert who crashed in practice and was replaced by Andre Dubonnet. The favourites for the 30-lap race over the 10.7-mile Le Mans circuit were France’s own Ballot team with Jules Goux, Jean Chassagne and Ralph De Palma driving.

But the Duesenbergs ran with the Ballots in the race and beat the French cars thanks primarily to better brakes. The Duesies enjoyed hydraulic brakes and were much quicker into the corners than the mechanically-braked Ballots.

Joe Boyer led, but blew his engine halfway through the race, while Murphy turned the race’s fastest lap in 7 minutes 43 seconds, averaging just over 80 mph, and was able to beat De Palma’s Ballot by fifteen minutes with Goux finishing third in another Ballot, and Dubonnet and Guyot taking fourth and sixth in their Duesenbergs. Suddenly, Murphy was an international racing hero.

It was a shock to the French hosts to see their cars beaten by the upstart Americans. There was no applause from the fans as Murphy took the chequered flag and at the victory banquet that evening the first toast was for third-placed Goux. Nor did Ernest Ballot concede victory, claiming that he was the race’s moral winner because his cars were ready for another race while the Duesenbergs were ‘shot to pieces, unfit to go another mile’.

But the fact remains that the day’s achievement by Murphy, his riding mechanic Ernie Olson and the Duesenberg operation has gone down in history as one of the greatest by an American driver, car and team. 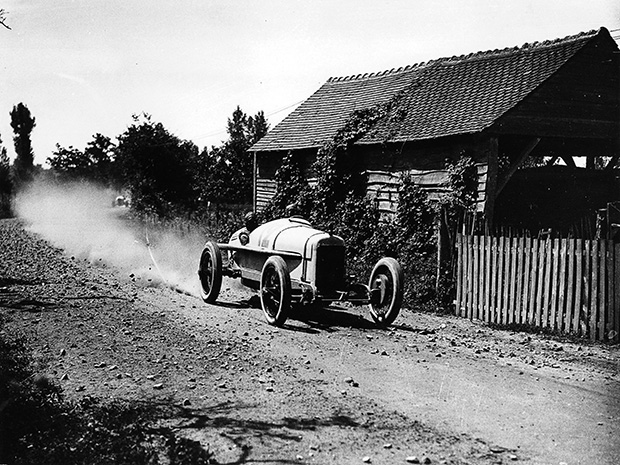 Murphy went on to win the Indy 500 and AAA championship in 1922. The following year he was beaten to the AAA title by Eddie Hearne after missing a few races in order to race in the Italian GP at Monza, the world’s second Grand Prix race.

Murphy drove one of Harry Miller’s cars at Monza with European drivers Count Zborowski and Martin de Alzaga aboard the other two Millers. But Fiat had developed the first supercharged racing engine that year and not even Murphy could keep up with the Fiats. He also had brake trouble in the race but was able to make it home in third, five minutes behind two of the Fiats driven by Carlo Salamano and Felice Nazzaro.

In 1924 Murphy qualified his unsupercharged Miller on the pole at Indianapolis and led a quarter of the race before he was overwhelmed by Joe Boyer in one of the new supercharged Duesenbergs. Murphy then ran into tyre trouble, eventually finishing third. But after the 500, Murphy went on a tear, winning three races in a row on the boards and taking control of the year’s AAA championship.

Just one dirt track race was on the AAA’s championship schedule for 1924, at Syracuse, New York, and despite his distate for dirt tracks Murphy showed up to compete. He was running a strong second late in the race when a shock absorber appeared to fail, throwing his car into the wooden barriers. One of the barriers crushed Murphy’s chest, killing him almost instantly, but Murphy was so dominant that year that he won the AAA championship even though there were still three races to be run after his death.