He might be having his best Formula 1 season to date but Lando Norris says he’s working just as hard out of the car as he is driving it.

So far this season, the McLaren driver is the only one to have finished in the points in every single round and that run includes two third-place finishes. His Imola and Monaco podiums and unmatched consistency in 2021 leaves him fourth in the championship heading into the second race of the triple-header.

Part of his preparations for races includes streaming less often on Twitch than he used to. Norris explained to Damien Smith in the August issue of Motor Sport that he’s trying to appear more serious than in the past.

“It’s easy for people to use things as excuses [against me], especially when someone’s a bit different [and active on] YouTube, on social media a lot and Twitch,” Norris explained.

“It’s easy for fans to shift blame for something on to that. If I’ve had a bad result or messed up a quallie lap it’s easy for people to say, ‘Maybe you should concentrate more and not spend time on Twitch.’ I can tell you every single driver has plenty of hours to sit on the sofa and watch Netflix – that’s all they do! Just because they don’t post it on social media people think they are in the gym 24/7, which they are not!

“Whenever I have a couple of hours off, relax and do what I want to do I chat to my mates and just stream at the same time so people can watch me do it.

“That gave people the perception that I wasn’t spending so much time working and trying as hard as other drivers, which is not true. So I’ve had to cut that down slightly and allow people to think I am a hard worker and be the best driver I can be.”

His hard work on the track is paying off as he leads team-mate Daniel Ricciardo by 42 points, with more than twice the amount as the Australian. It has also lifted him above Mercedes‘ Valtteri Bottas in the standings.

Though he spends less time streaming to his growing fanbase, his dedication at the McLaren factory in Woking has generated plenty of positives this season.

“I’m still 100% myself. In everything I do with my engineers and the team I’ve not changed one little bit, I’m exactly the same. It’s more just the perception you give to people rather than changing who I am or what I do or say. I feel like I’m a hard worker, it’s not like I just drive the car. I spend a lot of time here working with my engineers and try to motivate the team. Not many people see that often.”

This weekend, Formula 1 returns to the scene of Norris’s maiden F1 podium. With wet weather expected at some point over the race weekend in Austria, another brilliant performance isn’t out of the question.

A positive mentality and greater dedication to his work this season has reaped its rewards so far.

To read more about how Norris has used his experience to shape his approach and more about the McLaren team’s prospects for the future, make sure you grab your own August issue, available to buy now in stores and online. 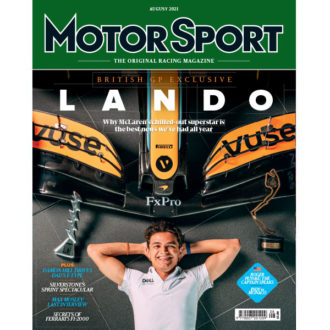