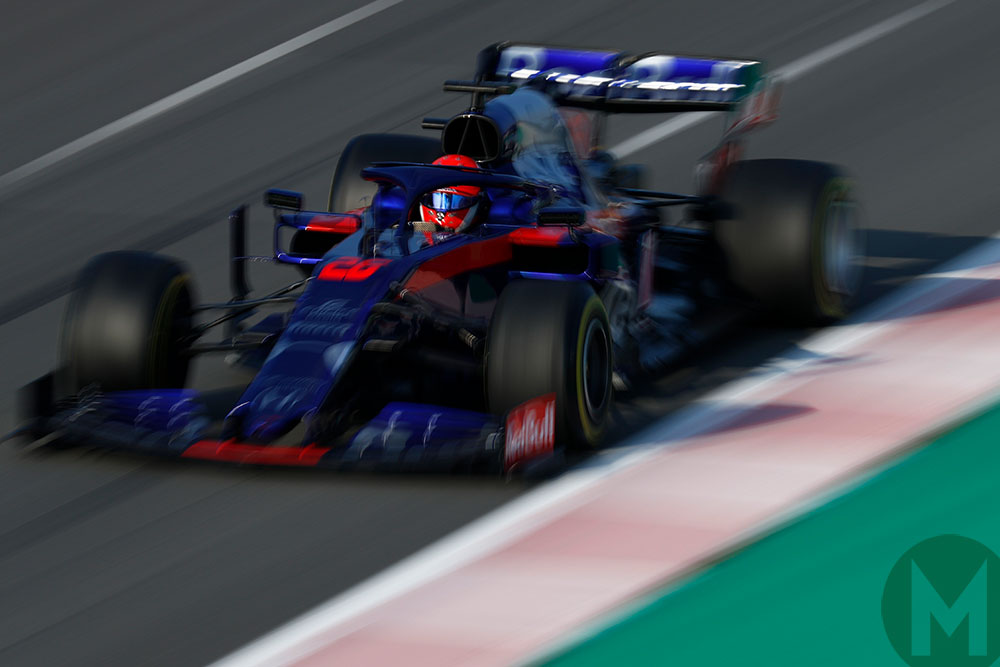 A stunning late lap by Daniil Kvyat in the Toro Rosso meant he was a surprise pacesetter on the third day of 2019 Formula 1 preseason testing at Barcelona.

Kvyat’s 1m 17.704sec mark set on the softest ‘C5’ compound tyres with around 15 minutes of the day’s running to go pipped the day’s long-time leader Kimi Räikkönen in his Alfa Romeo by a mere 0.058sec.

Räikkönen set a 1m 17.762sec time shortly before lunch, in a short run also using the C5 tyre compound. It also was also the first lap in the test up until that point to break the 1m 18sec barrier. It looked like it would remain unbeaten until Kvyat provided the late drama.

Kvyat’s is the fastest time of F1 testing so far and the Toro Rosso returnee completed 137 laps, one fewer than Räikkönen.

Up until the 2007 champion set his time, Ferrari had once again comfortably led the way with Sebastian Vettel on the C3 compound tyre clocking a 1m 18.350sec best. This was marginally slower than the times with which Ferrari had topped the first two days of Barcelona running.

Vettel slid to fourth in the final order after late improvements both by Kvyat and by Daniel Ricciardo’s Renault. Ricciardo set a 1m 18.164sec on the C4 compound to end the day third quickest.

Max Verstappen in the Red Bull, on C3 rubber, was fifth overall, his mark around four tenths shy of Vettel’s.

Verstappen pipped sixth-placed Nico Hülkenberg in the Renault by just 0.013sec. Renault was not using DRS following its rear wing failure when using the system yesterday and once again split its driving duties with Ricciardo taking over in the afternoon.

The Haas caused red flags on three separate occasions by stopping on circuit, which also makes it four times this week a Haas has stopped on track. Nevertheless Romain Grosjean ended the day seventh fastest with a best 1.4sec off Kvyat’s pace as well as under a tenth quicker than eighth-placed Pietro Fittipaldi who did the morning’s running for Haas.

McLaren missed the first two hours of running, the team saying that it was preparing the car after overnight changes, then when Carlos Sainz got out first an aerodynamic piece fell off the car and he later had a spin into the gravel. He ended the day ninth overall a tenth off Fittipaldi.

Sergio Pérez in the Racing Point was tenth quickest, with a mark 2.4sec slower than Räikkönen’s.

Mercedes, as it has done on every day of this test so far, split its driving duties, with Valtteri Bottas this time driving in the morning and Lewis Hamilton the afternoon. The Silver Arrows once again had a low profile on headline lap times – they ended the day 11th and 12th overall with Bottas ahead.

Yet Mercedes again topped the mileage charts – completing a total of 182 laps with around half an hour of the session to go compared with Renault next up with 143 laps.

The Williams was seen on track for the first time after lunch, in George Russell’s hands. His lap times however were modest and he ended the day last of the 13 runners, eight seconds off the pace.