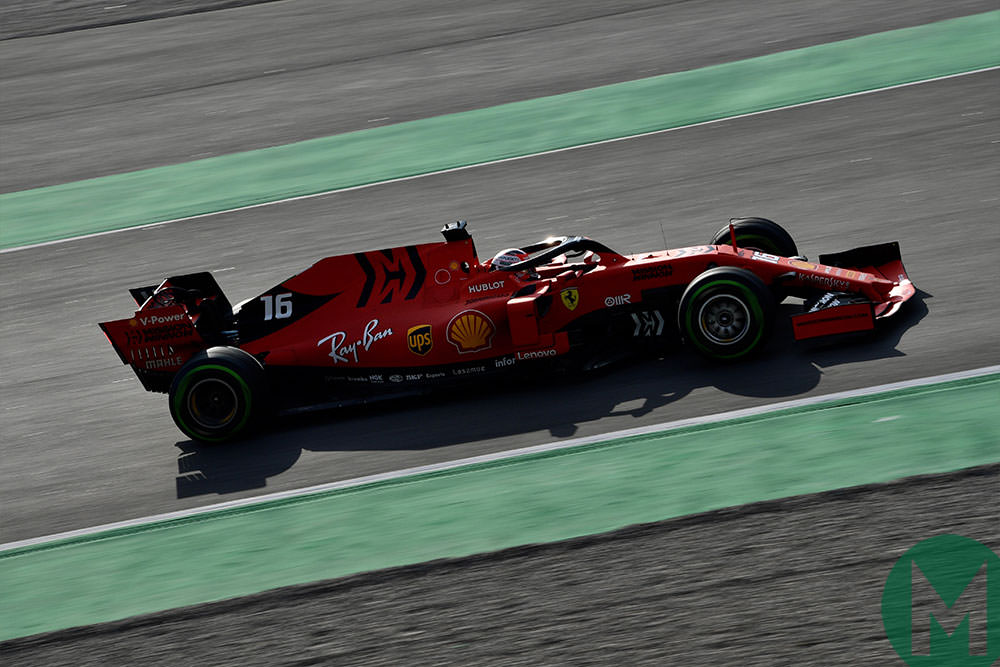 Ferrari led the way in 2019’s Formula 1 preseason testing at Barcelona, with Charles Leclerc taking over the car from Sebastian Vettel and continuing to comfortably set the pace.

Leclerc chiselled his best time down during the morning running today to set eventually a 1m 18.247sec mark on C3 compound tyres, which remained unbeaten for the rest of the day. Leclerc also completed 157 laps.

Lando Norris made a leap to second late in the day with a time of 1min 18.553sec for McLaren.

Kevin Magnussen was placed second at lunch and trimmed his time further in the afternoon though dropped to third overall late on, with a fastest lap just under seven tenths slower than Norris’s time.

Although Alex Albon brought out the first red flag of the day having spun at Turn Four, he finished with the fourth fastest time, pipping Alfa Romeo’s Antonio Giovinazzi by just under a tenth.

Lewis Hamilton and Valtteri Bottas shared duties for Mercedes, with Bottas ending up sixth and Hamilton 10th in another low-profile outing for the Silver Arrows. Mercedes did however top the mileage charts, completing 163 laps between the two drivers.

Daniel Ricciardo meanwhile had a dramatic rear wing failure while running down the pitstraight, the top flap detaching when the DRS was open. As it did yesterday, Renault split its driving duties, with Nico Hülkenberg taking over in the afternoon. The Renaults ended up eighth and ninth in the order with Hülkenberg ahead, the pair setting similar marks just shy of seventh place Pierre Gasly’s.

Gasly brought out a red flag in the afternoon, crashing his Red Bull.

Lance Stroll finished 11th ahead of Pietro Fittipaldi who had a brief cameo in the Haas VF19, completing 13 laps.

Williams missed the second day of running, as it had the opening day, due to its FW42 not being ready. It confirmed during the running today that it is delivering its car to the track overnight and aims to run it tomorrow afternoon.