It’s a battle, a fight and there will only be one winner. Talk of friendship is being replaced by talk of rivalry. Fun and games is old news, today’s thoughts are all about strengths and weaknesses. 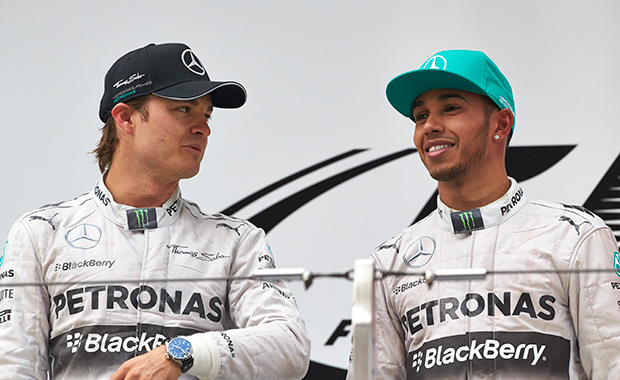 Lewis Hamilton and Nico Rosberg are in a race of their own this year thanks to their outstanding Mercedes cars but their driving is sublime, fierce and breath-taking.

When they became team-mates they talked about their friendship through childhood and their battles in karting along with all the on-track and off-track fun in the junior formulae. Now, though, Hamilton and Rosberg are having to see each other through different eyes. Simply put they are rivals and it seems that the only man standing in the way of each becoming World Champion is the one across the garage.

Both were bullish after the race in Spain but it was a mighty coup for Hamilton, to get his fourth consecutive win. In fact the only thing that stopped him winning all five was that technical failure while he was leading the race in Australia at the start of the season.

Rosberg hasn’t put a wheel wrong either. He was there and waiting to pick up that victory in Albert Park and he has finished second on every other occasion and more often than not a nail-bitingly close second.

Niki Lauda’s approach is incredible: he wants what we want and his approach is more like a lover of racing than a team boss. When speaking to the British press after the race he said how he was dreaming of getting rid of the rivals, mathematically of course, leaving just his two drivers to battle for the championship.

“Then, they can drive over each other and whoever is surviving is World Champion,” he said. “This is my dream but we are not there yet. I want them to throw everybody off and then there is no enemy – then it’s really going to be warfare!”

When I spoke to Rosberg after the race I asked him about Hamilton trying to take him on psychologically. “Good luck with that one,” he responded.

They both say that during their teenage years whilst battling for titles they never fell out: “We have done it before, when we were 14, and it is so funny because it is like deja vu all day long,” said Rosberg. “Back then we had discussions, debate, but life goes on.”

They are both very different characters. Lewis is much more emotional, you can hear that just from interviews and even his team radio, especially on Sunday during the race. He has grown up in the UK, been thrust into the world of motor sport at a pretty early age and has at times struggled to keep out of the newspapers thanks to nights out, an A-list lifestyle, famous girlfriends and the British press, as much as anything else.

Nico obviously comes with an impressive motor sport pedigree. He grew up in Monaco, has a settled life and a fiancé who was his childhood sweetheart. He does his interviews in five languages and is cool and considered in every one.

If Lewis has the on-track flair then Nico has the calculated edge mentally. When we did the interview with Lewis in the pitlane in front of the Mercedes garage, the crowd who had come on to the track to watch the celebrations were chanting “Lewis, Lewis, Lewis!” Nico then took his trophy, got some pictures taken on the pitwall with the fans and in a flash the allegiance and chanting had become “Nico, Nico, Nico!”

It might not win him a championship but he’s clever and for a few moments at least in the background of the Lewis interview the only noise was the sound of Nico’s name. Would he rather have left the circuit with a larger trophy and 25 points? Of course he would, but this championship might come down to strategy both on and off the track.

Will they keep being so friendly throughout the season? One ex-driver said that the only thing to do from now on is for Lewis to think of Nico as car 6 and Nico to consider Lewis car 44, just another guy on the track. Take away the friendship and go all out to win.

The racing so far between the two has been respectful, give or take a move in Bahrain. The friendship is intact but now Rosberg has lost the lead of the Championship and Hamilton has that and the momentum.

With 14 races to go our next stop is Monaco, Rosberg’s home and Hamilton’s new home. If there was ever a race Rosberg wanted to win (again) it’s this one. In Monte Carlo Rosberg is the local hero and Hamilton is the new boy in town. But Hamilton isn’t going to respect those ideals and Rosberg isn’t going to be hospitable. Great news! Let battle commence!