Lewis Hamilton says the FIA hasn’t fully regained his faith despite making several changes to Formula 1 race direction ahead of the 2022 season.

Hamilton was speaking at the Mercedes W13 launch for the first time since losing the ’21 world title in controversial circumstances at the Abu Dhabi Grand Prix.

Addressing media for the first time since making post-race comments at Yas Marina and his return to social media earlier this month, Hamilton said that the changes were positive but he didn’t have full trust in the governing body yet.

“I probably put faith and trust alongside each other,” he explained. “Trust obviously can be lost in a blink of an eye or flick of a finger. Trust is something that’s built over a long, long period of time. 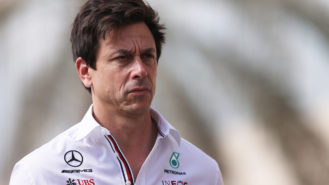 “This first announcement and launch yesterday is perhaps the first step of that. But that doesn’t necessarily change everything just yet. We have to see actual action.”

Several changes were announced by the new FIA president Mohammed ben Sulayem ahead of the new F1 campaign aimed at improving the race direction of races. Michael Masi will not return as race director and will instead be replaced by the combination of Eduardo Freitas and Niels Wittich.

Both have prior World Endurance Championship and DTM experience as race directors but will be assisted by permanent advisor, Herbie Blash, who returns to F1 five years after his last involvement.

Hamilton added that he would wait to see how the changes take effect but was concentrating fully on preparing for the new season and new Mercedes car.

“I think it will take a bit of time, but I’m not really focused necessarily on that area at the moment, just putting absolutely every ounce of my energy and time into making sure that I’m the best you’ve ever seen.”