The pair arrived in F1 during the same season and one or the other has largely dominated ever since. The Lewis Hamilton/Sebastian Vettel rivalry may have lessened in recent years but the reigning world champion declared it his favourite in the history of F1.

Ahead of the Emilia Romagna Grand Prix, several drivers were asked for their favourite F1 rivalry. Prost vs Senna was picked out, as was Hamilton vs Rosberg, by Charles Leclerc who grew up watching the Mercedes team-mates battle.

But for Hamilton himself, the one that stands out to him is his battle with Vettel. The seven-time champion was partnered with Vettel for pre-race conference — appropriately. Since both arrived on the scene in 2007, they have been fairly inseparable as the standard-setters.

Their on-track battles peaked during the 2017 and 2018 seasons, but their rivalry has been going on for a much longer period.

Long before the Red Bull/McLaren years and the Mercedes/Ferrari epic, Hamilton and Vettel were fighting one another in Formula 3 in 2005. It was Vettel’s rookie season and Hamilton’s second. The duo shared the podium on five occasions, with Hamilton doing the winning at that point.

The clip of the duo’s fight at EuroSpeedway Lausitz has been viewed over a million times on YouTube and was a taster for what was to come. In 2006 Hamilton graduated to GP2 and won the title in his rookie season while Vettel finished runner-up in the Euro F3 series in his second year to Paul di Resta.

With the departure of Kimi Räikkönen to Ferrari, the door was open to McLaren’s in-house superstar and Ron Dennis put his young charger alongside Fernando Alonso for the 2007 F1 season.

Vettel scored three podiums in a half-season of Formula Renault 3.5 before he was called up to BMW Sauber’s race team having already been made the third driver the year prior. Following Robert Kubica’s huge Canadian GP crash, the German was handed the seat and his journey into F1 was complete half a season after Hamilton’s. 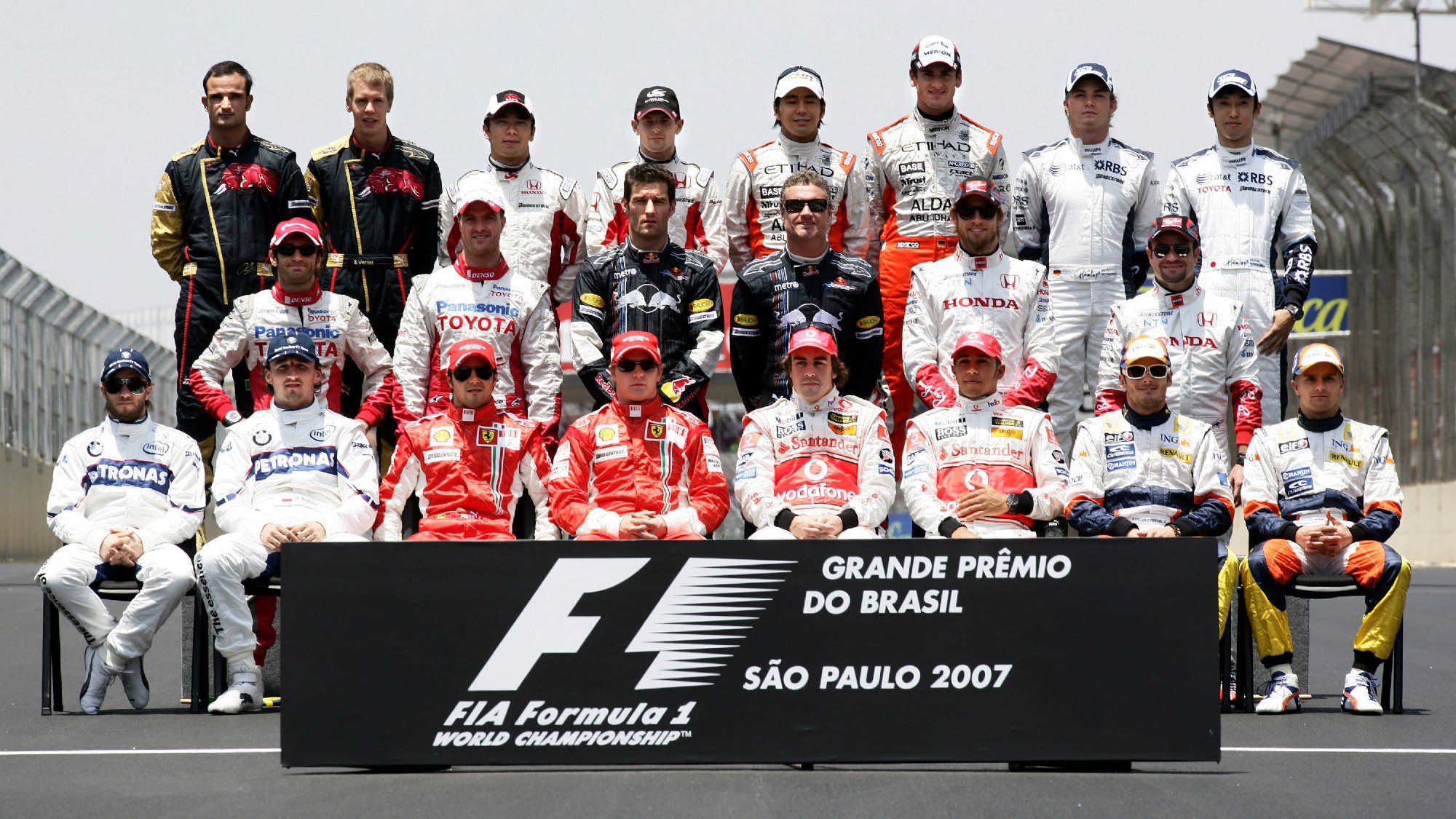 Alongside Alonso and in a race-winning McLaren, fireworks ensued between the two-time champion and his rookie team-mate. The marker had been laid in the sand in the first race of the season. Hamilton showed his far more experienced team-mate the back of the MP4-22 immediately, passing him around the outside of the very first corner at the first race.

His consistency in the first leg of the season netted him the championship lead early on, and his first win came at the 2007 Canadian Grand Prix. For Vettel, his break-out moment had to wait a while longer but having impressed in his BMW stand-in role for Kubica, Vettel was offered a seat at Toro Rosso to replace the out-going Scott Speed.

Hamilton narrowly missed out on the title in his debut season while Vettel’s time to shine was not too far away.

The following season brought with it plenty of drama for both men as Hamilton fought for his first F1 title while Vettel scored an unlikely maiden victory in the Toro Rosso surprise package.

At a treacherous Monza Park, Vettel secured pole position ahead of McLaren’s Heikki Kovalainen and future Red Bull team-mate Mark Webber. Despite the conditions and the threats from behind, he retained his lead and won his first F1 race by 12.5sec to become F1’s youngest race winner.

Up against Räikkönen and Felipe Massa, Hamilton’s five wins and fifth place in a heart-pounding final race was enough for his first F1 title in miraculous circumstances, although Vettel came close to tipping the championship in Massa’s favour.

As rain started to fall in Sao Paulo and drivers pitted for intermediates, Vettel was running behind Hamilton until Robert Kubica attempted to unlap himself. As the Pole moved ahead of Hamilton on the road, the McLaren driver ran wide into the final turn allowing Vettel through and crucially taking away his championship-winning fifth place.

It wasn’t until the final lap and pass on the very slow slick-tyred Toyota of Timo Glock at the final corner that Hamilton regained position to win the championship. 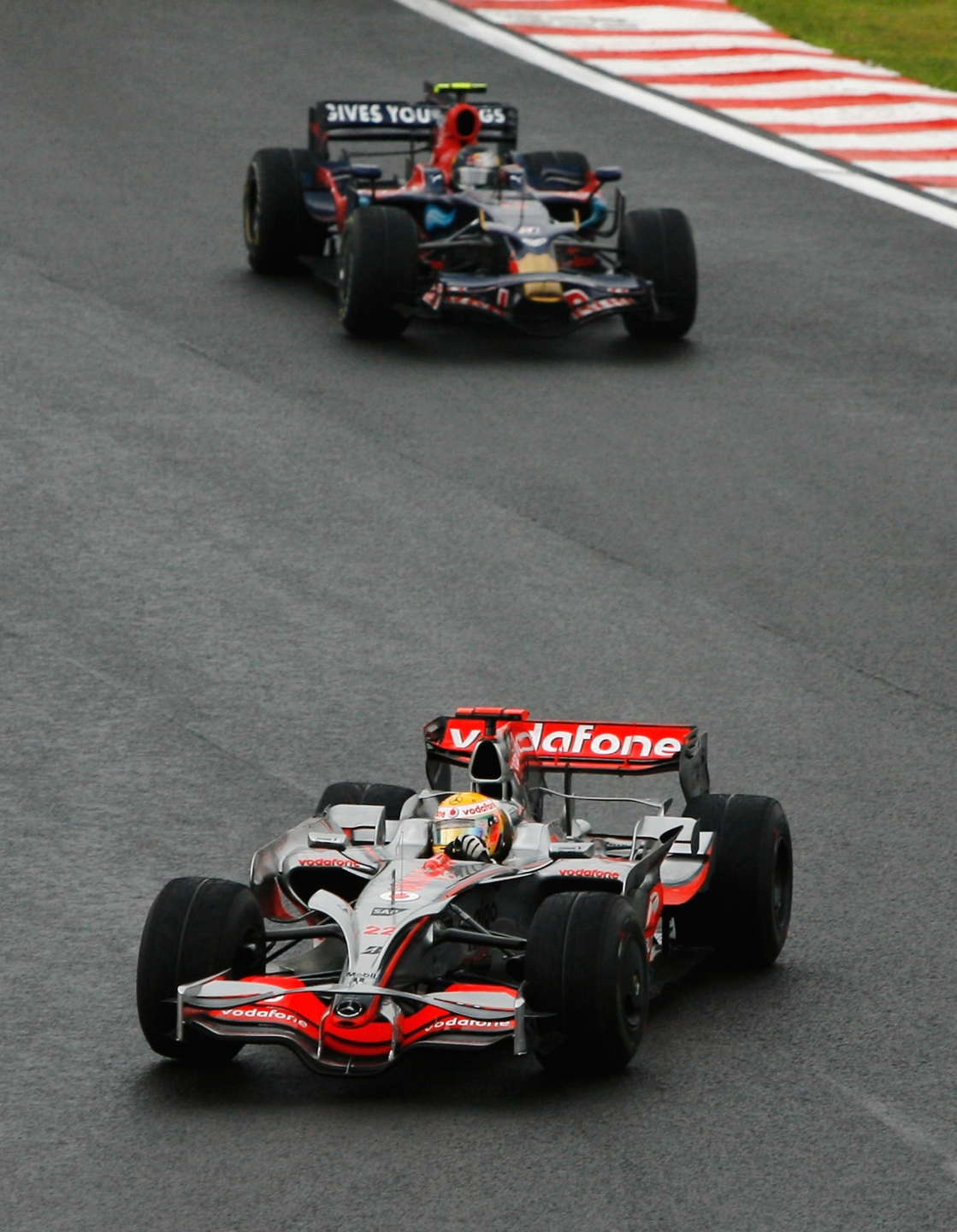 It was a big season that had a lasting impact beyond the 2008 result, with new regulations and opportunity for others fast approaching on the ’09 horizon.

The rule changes brought with it a shake-up in the order as McLaren and Ferrari faded while Brawn GP aced them. Hamilton took just one win as defending champion though the MP4-24 was much improved by the season’s end.

Red Bull was also one of the big winners as Adrian Newey and co. came up with the promising RB5. It won the development race and brought newly-promoted Vettel four wins that season, but there were plenty more on the horizon. 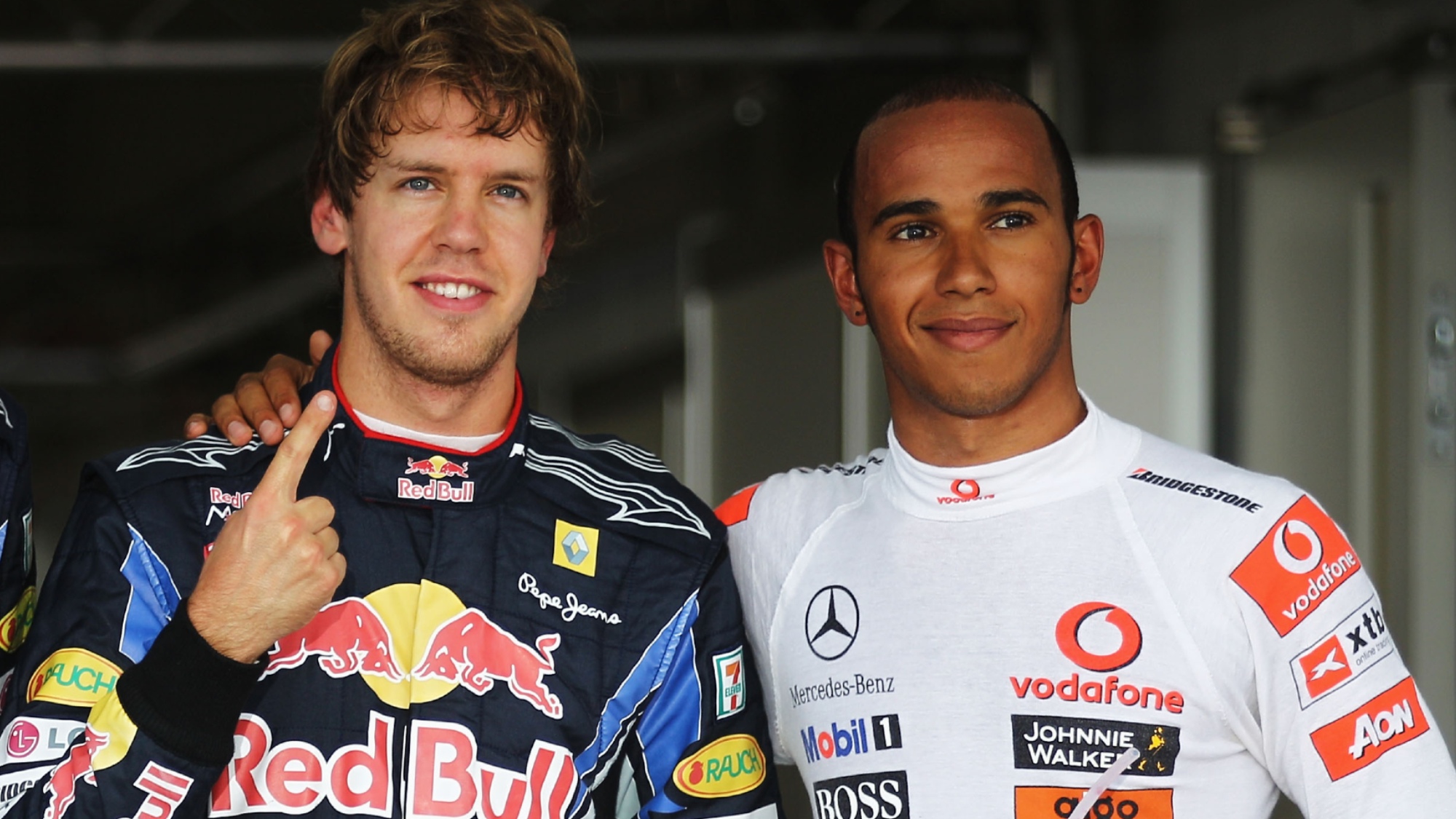 2010 was the start of the peak of Vettel’s F1 career as he dominated the sport with Red Bull to leave challengers in Alonso and Hamilton behind in the championship stakes. A strong second half of the season and an infamously difficult-to-pass Renault of Vitaly Petrov gave Vettel his first F1 title to beat Hamilton’s record as youngest-ever champion. 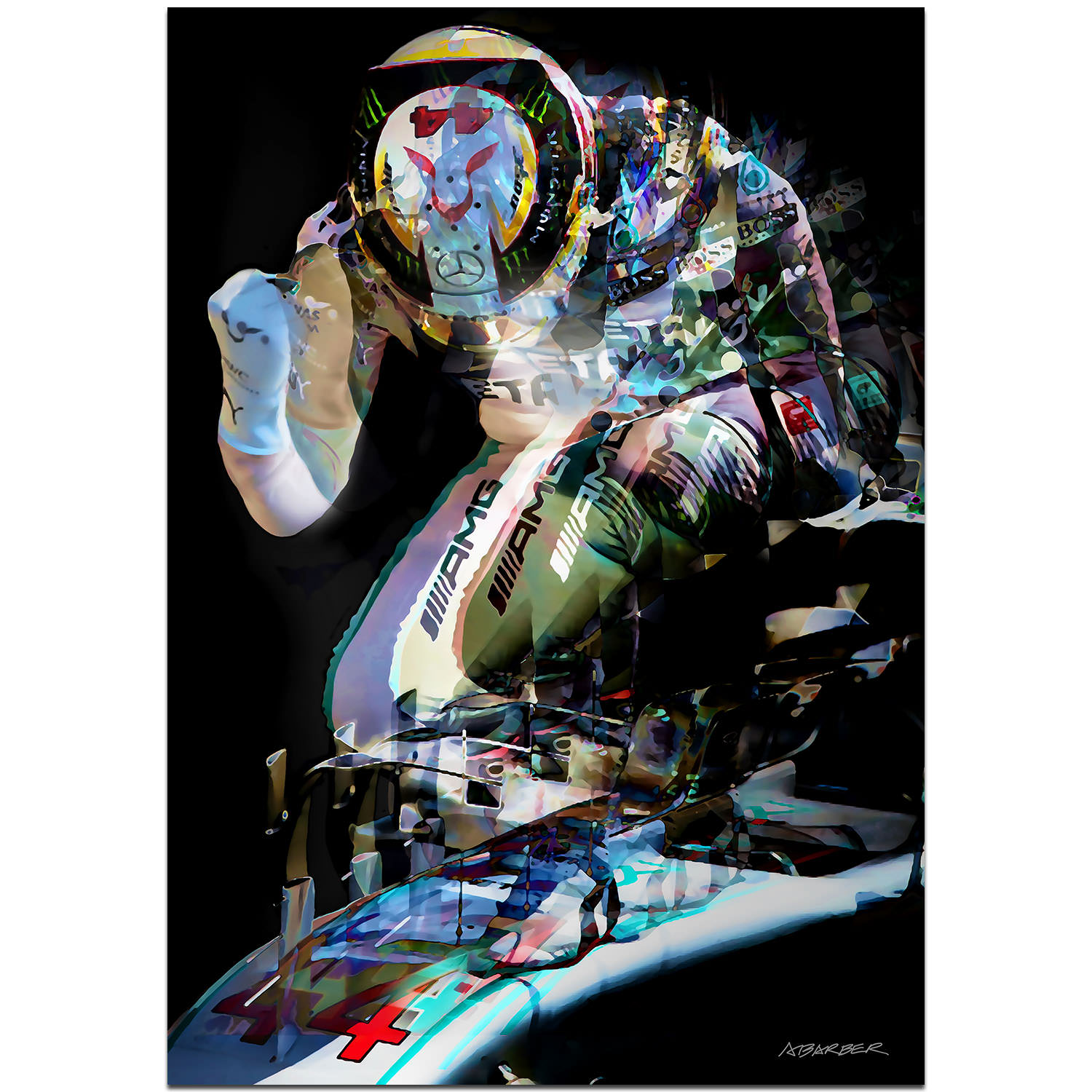 The following year brought with it the RB7 that was the class of the field. Vettel was unmatched all year and took 11 race victories on the way to back-to-back titles. Hamilton meanwhile endured arguably his worst season to date, ending the season fifth in the championship after a series of messy incidents involving ’08 rival Massa.

2012 was the closest the two had been to an established title battle though with McLaren faltering more often than not, a battle between Vettel and Hamilton didn’t materialise and it was Alonso that took the battle to the final race. Vettel would not be denied a third championship on the bounce though.

After four barren seasons at McLaren, Hamilton decided a change of scenery was in order for 2013 and beyond. His move to Mercedes took a while to bear fruit but the sole win in Hungary kept up his record of winning in each season. It was Vettel’s most dominant title of the four. Nine consecutive wins put him level with Alain Prost, but the F1 landscape was set to shift once more, this time in Hamilton’s favour. 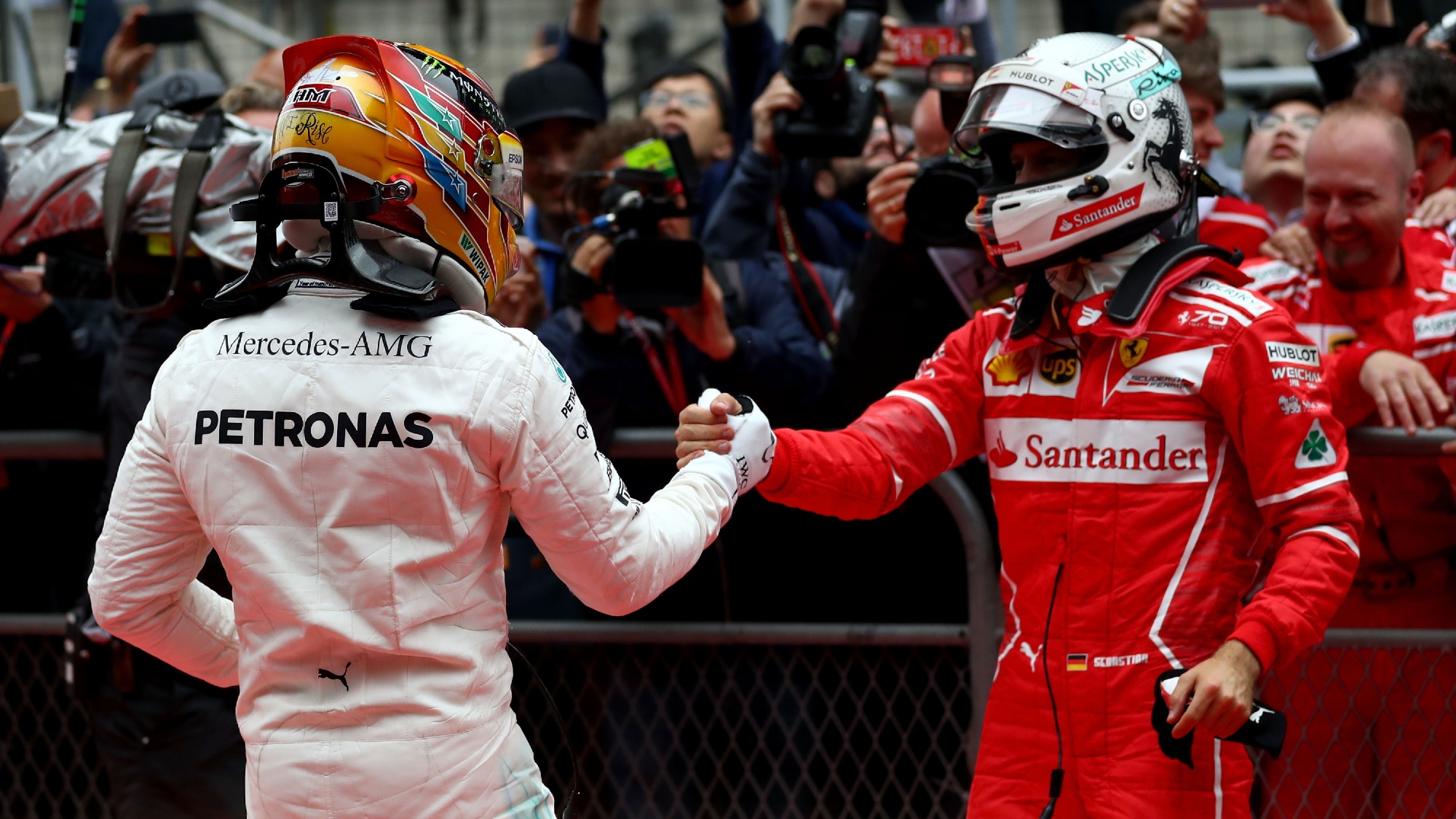 The turbo-hybrid era brought with it another period of dominance for one team in terms of titles and statistics. Hamilton’s risky move to Merc paid off in a big way, winning the 2014 and ’15 titles while Red Bull slipped from competitiveness and led Vettel to seek pastures new at Ferrari.

His move looked good when he won his first race with the team in round two of the ’15 season, but Ferrari wasn’t quite ready to challenge for a title just yet. 2016 was the height of the Hamilton/Rosberg rivalry as acrimony between the two former friends boiled over on track, and Hamilton lost the chance to equal Vettel on four world titles.

For 2017, Ferrari finally took a big step towards competitiveness, setting up a straight fight between the best of their generation. The duo exchanged wins to open the season and there was an added degree of spice added in Baku with a spot of road rage from Vettel against Hamilton.

Feeling he’d been brake-checked by the race-leading Mercedes, Vettel drew alongside Hamilton and drove into him, prompting fierce criticism from Hamilton post-race. Despite the incident, Vettel fortuitously extended his championship lead after Hamilton was forced to pit due to a loose headrest.

A back-and-forth first half of the season was narrowly edged by Vettel. At four wins to Hamilton’s three, Vettel held the lead of the championship going into the summer break but a relentless comeback from Mercedes and Hamilton and five race victories in six set Hamilton up for his fourth world title in Mexico. 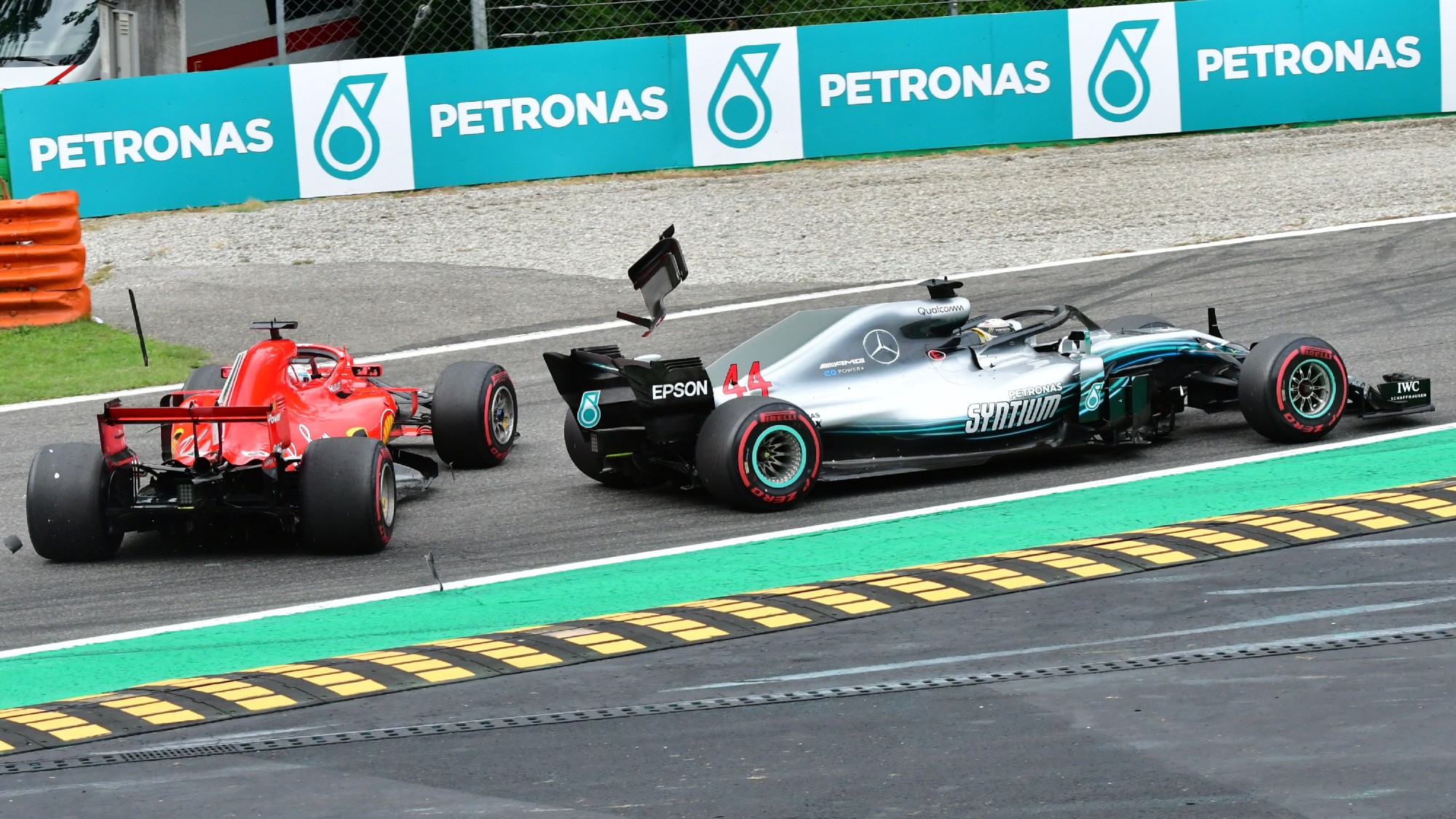 2018 stands as the year where the two fought tooth and nail for the F1 crown over the course of the season. It had on-track action between the pair and cars on an even footing for the majority of the races.

Two Vettel wins to kick off the season was a surprise with many expecting Hamilton to carry on his form from the end of the 2017 season. It took until round four for Hamilton to secure his first win of the year, and it was a mistake from Vettel that gifted him the win. A lock-up on cold tyres in Baku put Vettel down the order and out of position to capitalise on Valtteri Bottas’s late-race puncture.

A win in Canada gave Vettel back the lead of the championship having lost it to Hamilton post-Baku though it was a short-lived lead with Hamilton victorious at Paul Ricard. A rare double-DNF in Austria opened the door right back to hand Vettel a one-point lead heading into Silverstone. First-lap contact with Räikkönen relegated Hamilton down the order and gave Vettel the chance to take the win on rival turf, a favour repaid immediately and in dramatic circumstances.

Having led the early phase of the German Grand Prix, Vettel was quickly being closed down by a rapid Hamilton who was on a recovery mission from 14th on the grid following more reliability gremlins. An error as rain started to fall put Vettel in the barriers and Hamilton through into a race-winning position. It proved to be the pivotal moment of the season.

A win in Belgium for Vettel closed the title lead back up ahead of Ferraris home race at Monza, and the straight-line performance of the SF71H at Spa promised much for the Tifosi.

Ferrari locked out the front row but its elation was short-lived on race day, as Hamilton and Vettel went into wheel-to-wheel combat. Entering the second chicane deep on the brakes, Hamilton pulled a move around the outside of Vettel. The German spun in response and the Mercedes went on to hunt down and overtake Räikkönen for an important win.

Operational and reliability issues plagued Ferrari from Singapore to Japan but another mistake in close quarters with another driver at COTA sent Seb spinning and one race later, Hamilton moved clear of his rival and onto five world titles. 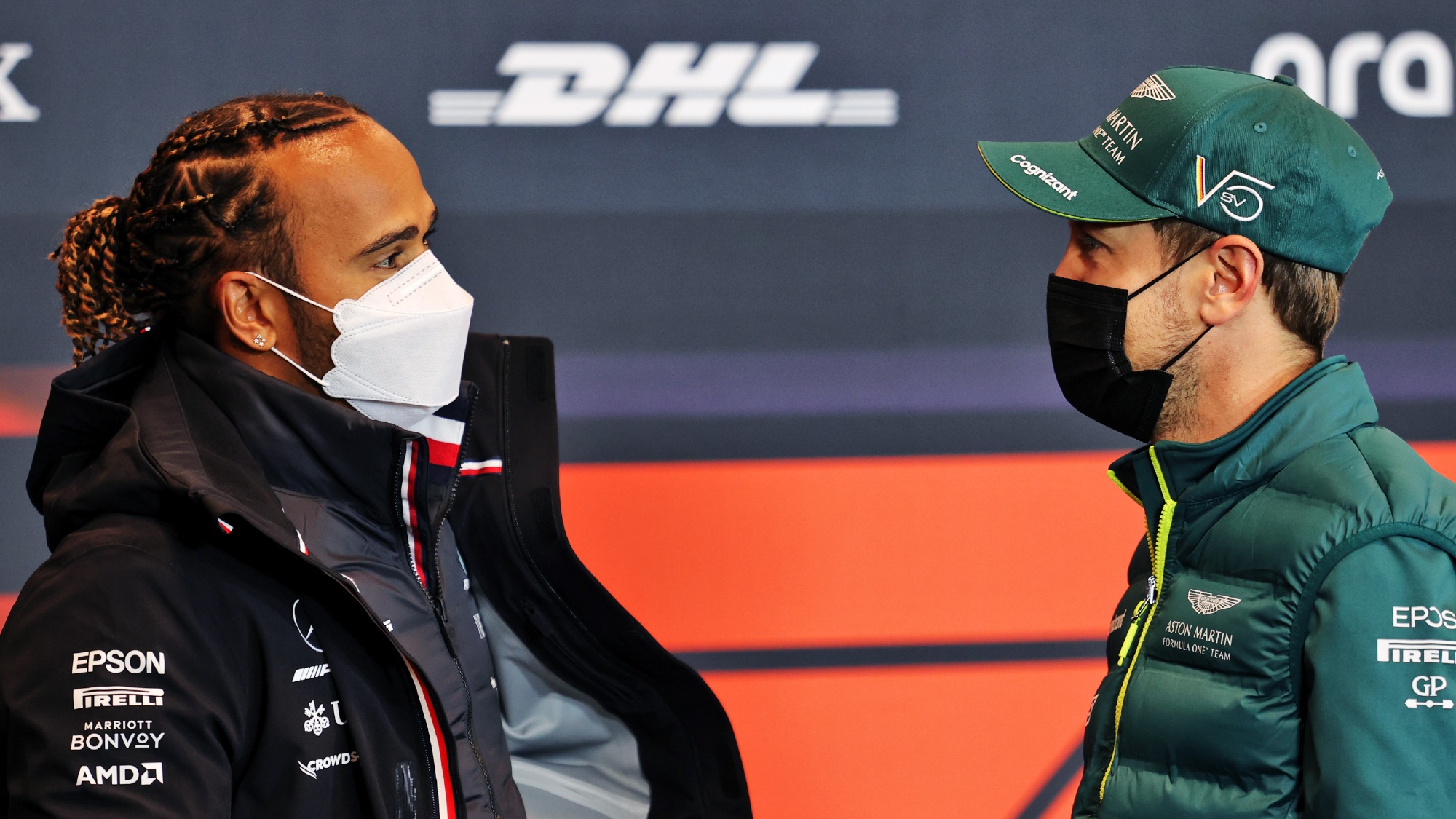 Despite Vettel’s aspirations to prevent Hamilton from breaking hero Michael Schumacher’s F1 records, the past few seasons have been the Hamilton/Mercedes show.

Ferrari’s performance dipped in 2019 and the on-track battles between the two became less and less frequent. A spin in Bahrain as Hamilton pulled off an overtake at Turn 4 signalled the dip in form for Vettel that has continued on ever since.

As Hamilton added more and more records to his collection, Vettel’s performances have never been at the same championship-level. For 2021, it looks as though Verstappen is now the challenger to Hamilton’s crown though the two experienced hands clearly still retain a great deal of respect for one another stemming from their battles on track through the years.