Lewis Hamilton has said he wishes other athletes “spoke out on these issues” in regards to human rights, as Formula 1 visits another to controversial venue to race in Qatar for the first time.

Speaking at the Qatar GP pre-race press conference when being questioned on the morality of racing at such a location with a questionable human rights record, the seven-time world champion was unequivocal on his view, whilst being reasoned with his argument.

“I do feel that we’re aware there are issues in these places that we’re going to, as they’re all around the world,” he said. “But of course [Qatar] seems to be deemed as one of the worst in this part [of the world].

“I do think as the sports go to these places, they are the duty bound to raise awareness for these issues.

“These places need scrutiny from the media to speak about these things. Equal rights is a serious issue.” 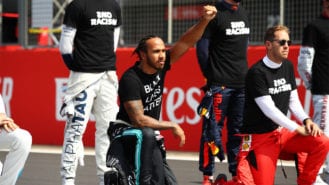 Lewis Hamilton has give his reason for why he'll keep taking the knee before races, as well as detailing what steps he's taken to help alleged Bahraini torture victims

Hamilton did however concede that countries like Qatar have shown a willingness to change to some degree.

“I’m aware that these place they are trying to make steps and it can’t change overnight,” he said. “I heard there are things like a new reforming with the Kafala system.

“I just feel that when we do if we are coming to these places, we need to be raising the profile of the situation.”

Hamilton stated earlier this season in Bahrain, another country with a questionable human rights record, that he would carry on taking the knee, saying to it “sparks an uncomfortable conversation”. In Qatar, the Mercedes driver said he wished more athletes brought awareness to such courses when queried on the matter.

“Look, one person can only make a certain amount of small difference, right? But collectively, we can have a bigger impact,” he said. “And so yeah, do I wish that more sports men and women spoke out on these issues? Yes.”

However, the reigning champion also conceded that such situations take time to be first understood and then solved.

“The fact is that also it’s education, ” he said. “It takes time to go out and learn more about a region that’s foreign to us. We’re not from these areas. It’s incredibly complex on the ground in these places with [respective] religion[s], and there’s so many complexities that it’s difficult to even understand them all.

“I think what’s important is that we still try to bring awareness to some of these problems, and whilst there are some changes that have been made over time, it’s never enough.

“I just know that as a sport we’ve been to, and I’ve been to a lot of these countries and been ignorant, been unconscious of some of the problems that have been in some of the places.

“So it’s down to whether you decide to educate yourself and hold the sport more accountable and make sure the sport is actually doing something when they go to those places.

“So that’s kind of why I’ve tried to raise my voice, but again, there’s far brighter people that are knowledgeable on these issues that are actually trying to fight them in the background.

“But I still think that we can still bring a spotlight to it.”