What makes the Macau Grand Prix so special? A host of famous drivers look back

“It still means a lot in the racing world to win in Macau,” says Ferrari junior driver Callum Ilott, winner of the 2017 qualifying race.

Win the main race in the gambling capital of the world and your name is up in lights alongside the likes of Ayrton Senna and Michael Schumacher.

Inaugurated in 1954, initially as an amateur race for sports cars, its growth has been steady but unrelenting. Dieter Quester, Vern Schuppan, Riccardo Patrese and Geoff Lees claimed Formula Pacific wins in the ‘70s before the Formula 3 cars arrived bearing stars of the future.

The field has always been among the strongest in all of racing, a bone fide who’s who. Consider 1992, the year of this month’s ‘Lunch With…’ guest, Pedro Lamy.

“Macau never switches off… It’s a place that doesn’t sleep.”

Venture outside numbers one to 10 and you’ll find Christophe Bouchut, Jacques Villeneuve, Rickard Rydell, Tom Kristensen and Marco Werner among a host of others.

“Even compared to Monaco,” Lamy says, “Macau is the best. Much better than Pau.”

“At Macau, to drive on the limit, with the car on the limit through the fast corners, jumping through the barriers is really cool. It would be nice to do it in an Aston Martin, but it wouldn’t be the same as in an F3 car. It works like a train, but jumping and sliding a little bit.” 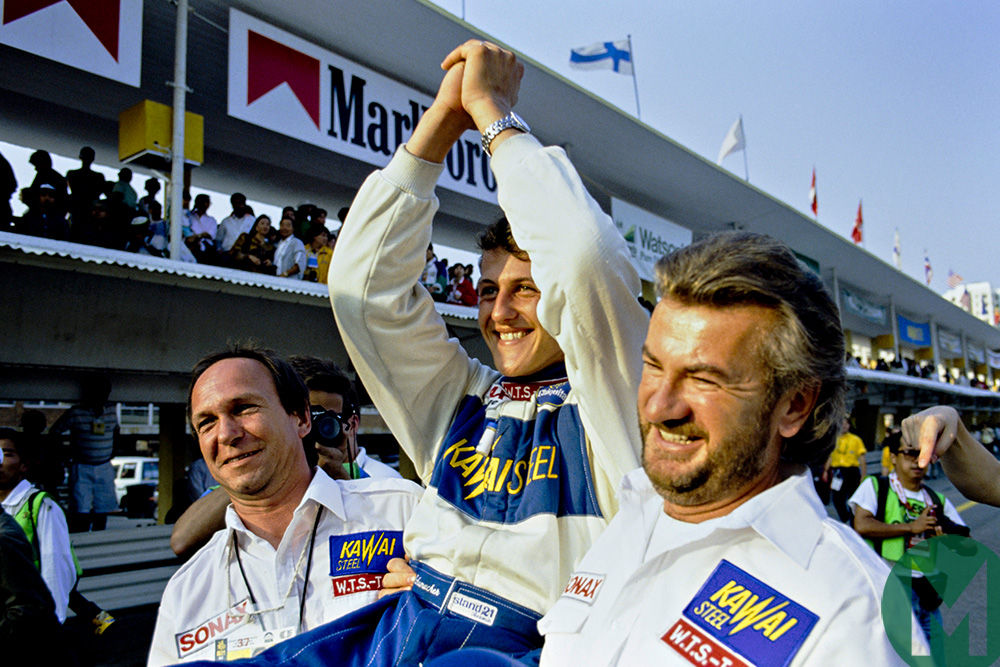 For Ilott, it’s this unique combination that brings him – and many others – back each year.

“It’s unpredictable and challenging, that’s the real appeal,” reckons the GP3 race winner. “Bagging a clean, decent lap feels really special. Macau is such a mix, nothing like any of the other street circuits such as Pau or Norisring I’ve raced at. My favourite part of the track is the hill section that runs from Lisboa (Turn 3) to Fisherman’s (Turn 23!); you are busy all the way through.”

Away from the track it’s one of the sport’s biggest parties, far enough away from the watching media to allow the up-and-coming kids to let their hair down and act their age.

Peter Dumbreck won the 45th edition of the Macau Grand Prix, and the hangover may have just worn off. “It was also one of the narrowest victories in street racing, winning by three-thousandths of a second,” says the Scot.

“I still remember the slowing down lap after the race and everyone waving but still not knowing if I had actually won! The moment I actually knew that I had won the race was when I arrived back to parc fermé and saw the look and excitement on the faces of my Team Toms crew.

“It was a whirlwind after that, from the podium celebrations, getting back to my hotel room and a moment’s rest and finding a bottle of champagne from the hotel manager. Then onto the prizegiving, party and finally putting my head on the pillow around 8 am the next morning!”

Few have better Macau stories than Steve Parrish, who was banned from the island until Portugal granted the colony independence due to one too many – and particularly fiery – excesses.

According to Alexander Sims, who raced six times at Macau and is now a factory BMW hotshoe, it’s the unique environment that adds into the mix to create an unforgettable send-off to the season.

“The culture has a big impact on the feel of the Macau GP; it’s a real differentiator from other races. It’s incredible: the number of skyscrapers and hotel blocks that come in all sorts of shapes and sizes, the neon lights, the amount of money, and the fact that it is all 24/7.

“Macau never switches off. Everything is always on and accessible. It’s a place that doesn’t sleep. Together, the culture and the unique aspects of such a challenging track make it a super special race.”

As F3 heads towards the Formula 1 circus next year, all but merging with GP3, this year’s race could be the last of its kind. The new cars could be too quick, according to the FIA, and the circuit may need modifications to keep the tradition going.

That, presumably, makes this weekend ever-more important for the returning Ilott.

“Macau is a race where there is still prize money, a good-looking trophy and of course, credibility,” he adds.