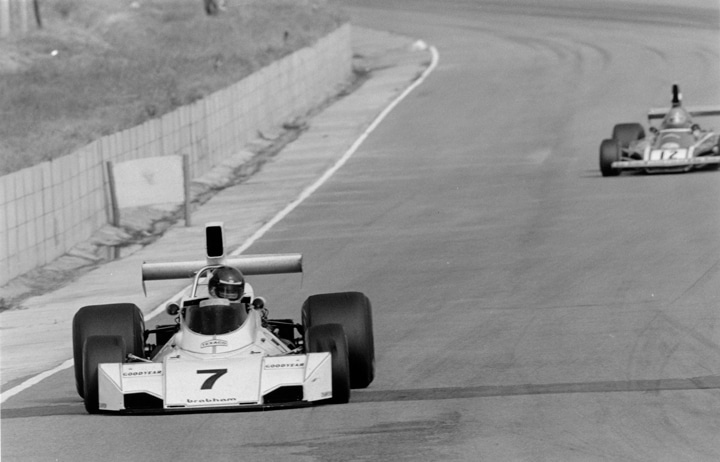 Featuring first-time wins, maiden podiums and a double Minardi birthday, this week’s round-up from the Archive ventures from San Remo in 1949 to a wet Interlagos in 1993.

Carlos Reutemann had a coincidental day of firsts this week, beating a 12-car field in Brazil in 1972 to claim his maiden Formula 1 success. Exactly two years later, at Kyalami, he scored his first points-paying victory. Fangio won in Europe for the first time, winning the poorly subscribed San Remo Grand Prix in 1949.

Ayrton Senna showed yet again his wet-weather brilliance in Brazil in 1993. The showers scuppered Prost’s early dominance, and a certain Michael Schumacher visited the F1 podium for the first time. Prost did win in Brazil this week, though, five years earlier at Rio when his pole-sitting team-mate Senna was disqualified.

At Long Beach in 1976, Regazzoni led from start to finish to head a Ferrari 1-2. A year later, Andretti put on an attacking display to beat Lauda and Scheckter.

Snetterton hosted F1 in 1961, with Graham Hill finishing the victor from the back of the grid ahead of Jim Clark. He had won the earlier sports car race in torrential rain racing a Jaguar E-type, but couldn’t make it a hat-trick in the later saloon car race. Roy Salvadori beat him in matching 3.8-litre Jaguars.

A field of brilliance went to Thruxton for a damp Easter round of Formula 2. Jochen Rindt was untouchable, heading Sir Jackie Stewart and Derek Bell.

The great Jack Brabham was born this week in 1926, and Mike ‘the bike’ Hailwood exactly 14 years later. Tony Brise, tragically denied the full and successful career his talent warranted, would have been 64 years old.

Marc Gene, underrated winner of the 2009 24 Hours of Le Mans, turned 44 and fellow Minardi racer Fabrizio Barbazza turned 53. Mike Thackwell turned 55 – outspoken and a maverick; he often provokes debate. Another who could have made waves in Formula 1 and who was equally as fast, Dave Coyne turned 58. The entertaining Eddie Jordan turned 68.

In sports cars, Lucien Bianchi was killed testing at Le Mans in 1969. He had won the twice-round-the-clock classic the year before. The experienced Stephane Ortelli turned 46. Will Hoy, touring car star and Le Mans racer would have been 62.