James Penrose has been at the forefront of technical innovations in F1 crash helmet design since the late ’80s. First involved with Lotus at Arai, his innovations may just have saved Martin Donnelly’s life.

Penrose made ground-breaking technical proposals which were eventually adopted by the FIA with their new standard, the ‘Super Helmet’, which was eventually introduced in 2004, after his suggestions fell on deaf ears for a long time.

He also describes how Michael Schumacher helped him gain access to the paddock, when helmet technicians were seen as unnecessary.

It’s just one of many captivating tales told in Formula Helmet, which recounts the story of F1 from 1969-1999 through the iconic crash helmets of that era. Drivers tell of how their signature designs came to be and when they needed their lids most, accompanied by stunning photography and interviews with helmet designers too.

Below is an excerpt from Penrose describing his contribution to life-saving innovations in grand racing, as well as being a first-hand witness to how attitudes towards safety have changed in the F1 world.

In 1988, earplug speakers didn’t exist. We had Phillips speakers that looked like the ones made of Bakelite used in telephones! They were 2.5 cm thick and 7 cm diameter. They were heavy and close to the ears. So I worked with Ktel (Japan) to produce lighter speakers. In 1990 at Jerez I changed Donnelly’s speakers to the new lighter version (about 50 per cent of the weight of the old ones).

During practice, he had a terrible crash where his helmet split in four or five places. He spent a lot of time in hospital in Spain and then many months in UK. One can only speculate about the result in the accident with the old big heavy speakers.

During my spare time, I then started to work on a new regulation that would combine rules of different tests. I proposed it to the FIA who rejected it many times over the next few years. Eventually, after the Imola accidents in 1994 they took my proposal seriously, but even then it took 10 years until the F1 Super Helmet (the 8860) arrived in July 2004 at the French Grand Prix.

Sadly the FIA hardly involved the hugely experienced helmet manufacturers. Moreover, the early 8860 helmet was rejected by Indycar because it couldn’t withstand multiple impacts. By not using the extensive expertise of the top helmet companies and taking it on themselves to develop the helmet the FIA missed many opportunities for the extensive ideas, innovation, new materials that the helmet companies could have brought to the project. They also funded the project themselves where (if the helmet companies had taken on the development costs) the funds might have been used well elsewhere. 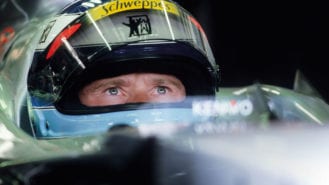 The helmet companies could have been given the target of prototypes in one year, finished project in use on the track within maximum of three. Instead the project took 10 years and produced a compromised design that has required several updates since. So, safety is a long process. I also remember Karl Wendlinger’s accident in Monaco 1994. His helmet still had the old version of the big heavy speakers, even though the lighter ones were available for 4 years! But at that time, everyone said it was useless…

At that time, helmet manufacturers were supposed to get a pass from their drivers for their staff to enter the paddock and pit area. It was a different era and helmet technicians were not considered ’necessary’ in the paddock to support their drivers. But as the drivers only had two guest passes… Anyway I didn’t have a pass. Of 26 drivers on the grid, Arai equipped 18 or 19 of them! Helmets needed to be prepared for practice, qualification and race, with different visors. A huge amount of work, and nowhere to do it!

“Suddenly, DC appeared with a Schumacher helmet! I almost lost my job that day”

On the second day, I talked to Johnny Herbert through the fence! Michael Schumacher, his teammate at Benetton (& Bell no1 driver), arrived, understood the situation and got me a pass for the weekend. For 1996, I managed to get a green pass each race. This gave me access to paddock, but not pits.

But at Monaco, the pits are separated from the paddock. No problems before the race. But during the pre-grid lap, David Coulthard had fogging. He couldn’t see anything! It was manna from heaven for Bell who wanted to sign DC. I couldn’t do anything from the paddock.

The radio was ripped out of his Arai helmet, and suddenly, DC appeared with a Schumacher helmet! I almost lost my job that day. But as soon as the situation was explained, things got back to normal. DC used an Arai helmet till the end of his career.

The notable fact is that Panis won that race with an Arai helmet, with no fogging issues. And it wasn’t as though he hadn’t been behind other cars in the spray through a good bit of the race before taking the lead!”