Formula 1 took a step into the unknown as it held its first ever sprint qualifying race in the World Championship’s history – and it was first blood to Max Verstappen whose incredible start saw him get ahead of Lewis Hamilton and stay there. He’ll start on pole tomorrow, with Hamilton second and Valtteri Bottas third.

Lando Norris and Daniel Ricciardo provided an entertaining battle with Fernando Alonso, as Sergio Perez spun out spectacularly from the exit of Becketts.

Max Verstappen, whose brakes were alight as the light went out, got the jump on Lewis Hamilton at the start, leaping from second into the lead as Nikita Mazepin span at the back.

Hamilton tried and failed to back past Verstappen at Copse, the Red Bull opening up a gap of 1.1sec at the end of lap one.

Alonso made an incredible start to jump to fifth, the old hand showing all his experience and utilising the extra grip of the soft tyre, as George Russell and Carlos Sainz made contact, the Williams tipping the Ferrari onto the runoff at the exit of Brooklands. 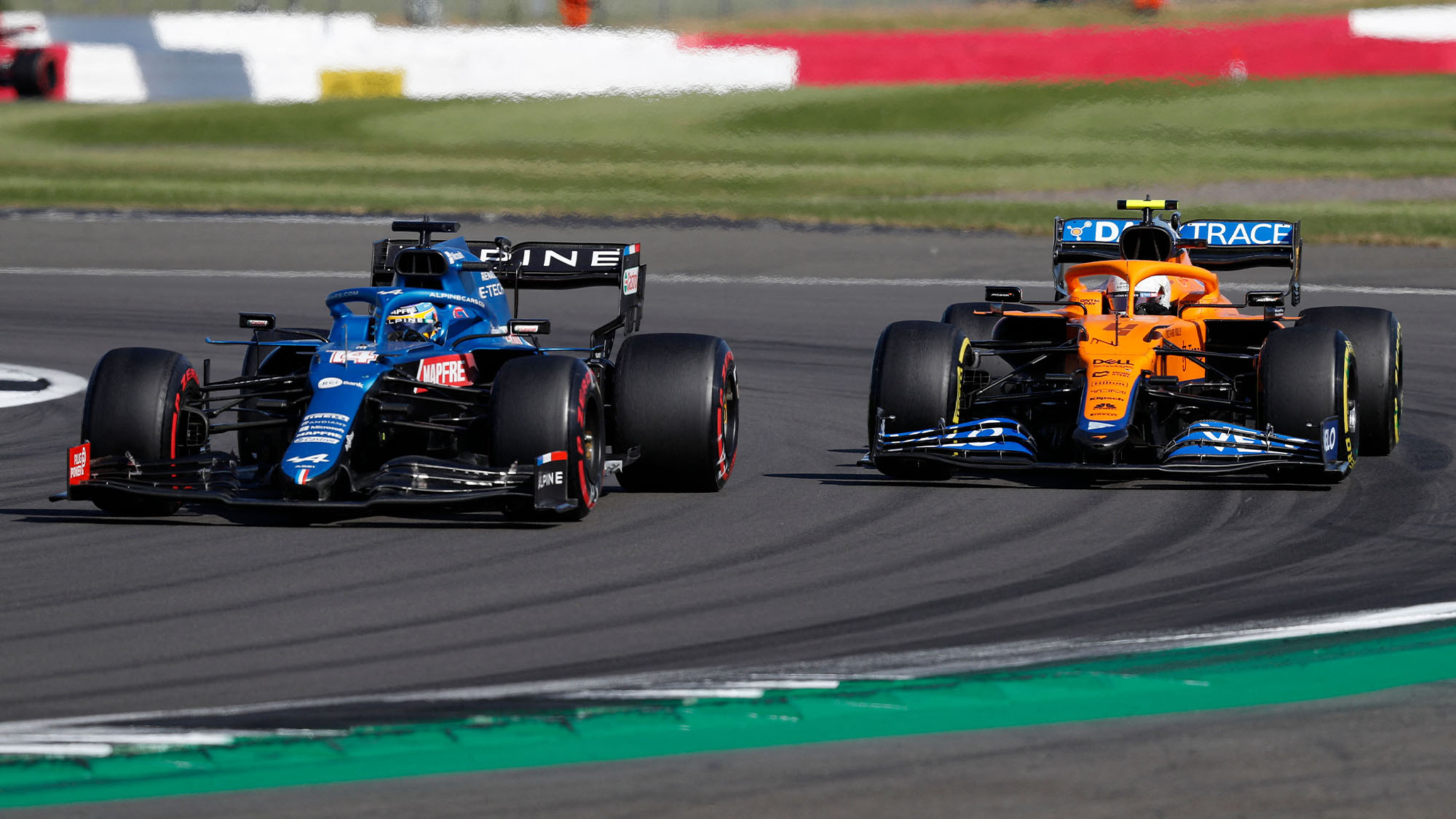 Perez got into Norris’s slipstream on the start/finish straight on lap three, before Norris managed to close on Alonso down the Hangar Straight, the Alpine weaving as it attempted to break the McLaren’s tow.

Norris again closed on the Alpine out of Copse, as the following Perez suddenly had massive spin at high speed coming out of Becketts, hitting the barrier but managing to carry on.

Norris then did get past Alonso up the inside into Village, with team-mate Ricciardo then closing on the Spaniard.

Russell and Sainz went under investigation for the opening lap contact as movement in the field settling down – it was then announced the stewards would review it after the race.

You’re forgiven if, like me, you’re finding it a bit of a confusing week in the world of Formula 1. I’m not quite sure why, but this afternoon you were…

Ricciardo finally managed to get Alonso with a double switchback move on lap 10, but Alonso drafted up behind into Copse, almost – but not quite – managing to get back ahead of the McLaren, before the Australian consolidated his sixth place.

Carlos Sainz got past Kimi Räikkönen for 12th whilst Hamilton was trying in vain to catch Verstappen, but did manage to set a fastest lap of 1min 30.065 whilst doing so – he was 1.6sec behind the Red Bull.

On lap 11 Sebastian Vettel closed up on Alonso, the Spaniard continuing to make his Alpine twice as wide as it actually is, whilst Russell lurked close behind looking to shift himself up from ninth also.

By lap 13, the pace remained strong and as a result both Hamilton and Verstappen were suffering from blistering on the inside of their right rears.

It didn’t seem to bother the Dutchman though – he then set a fastest lap of 1min 30.049sec. His margin over the Mercedes was now 2.3 sec.

Sainz managed to get past Gasly coming out of the chicane going into Vale after several laps of trying, moving into 11th by lap 14.

It was smooth running for Verstappen coming onto the final lap, easing off to allow the Mercedes to close, but the win to provide pole never seemed in doubt.

Max Verstappen made history by taking the first ever F1 sprint qualifying race win, putting himself on pole for tomorrow.