George Russell was classified second for a career-first podium, ahead of Lewis Hamilton, as the field finished largely in grid order, without a single moment of full racing.

Half points were awarded for the shortest race (distance) in F1 history, which lasted three hours and 44 minutes between the scheduled start and eventual abandonment, with the cars sat in the pitlane for the vast majority of the time.

The race eventually got underway more than three hours later than planned, as the field was led out of the pitlane by the safety car.

But standing water on the track and clouds of murky spray led race officials to bring the field back in three laps later. The race was then stopped for good at 5.44pm (BST). 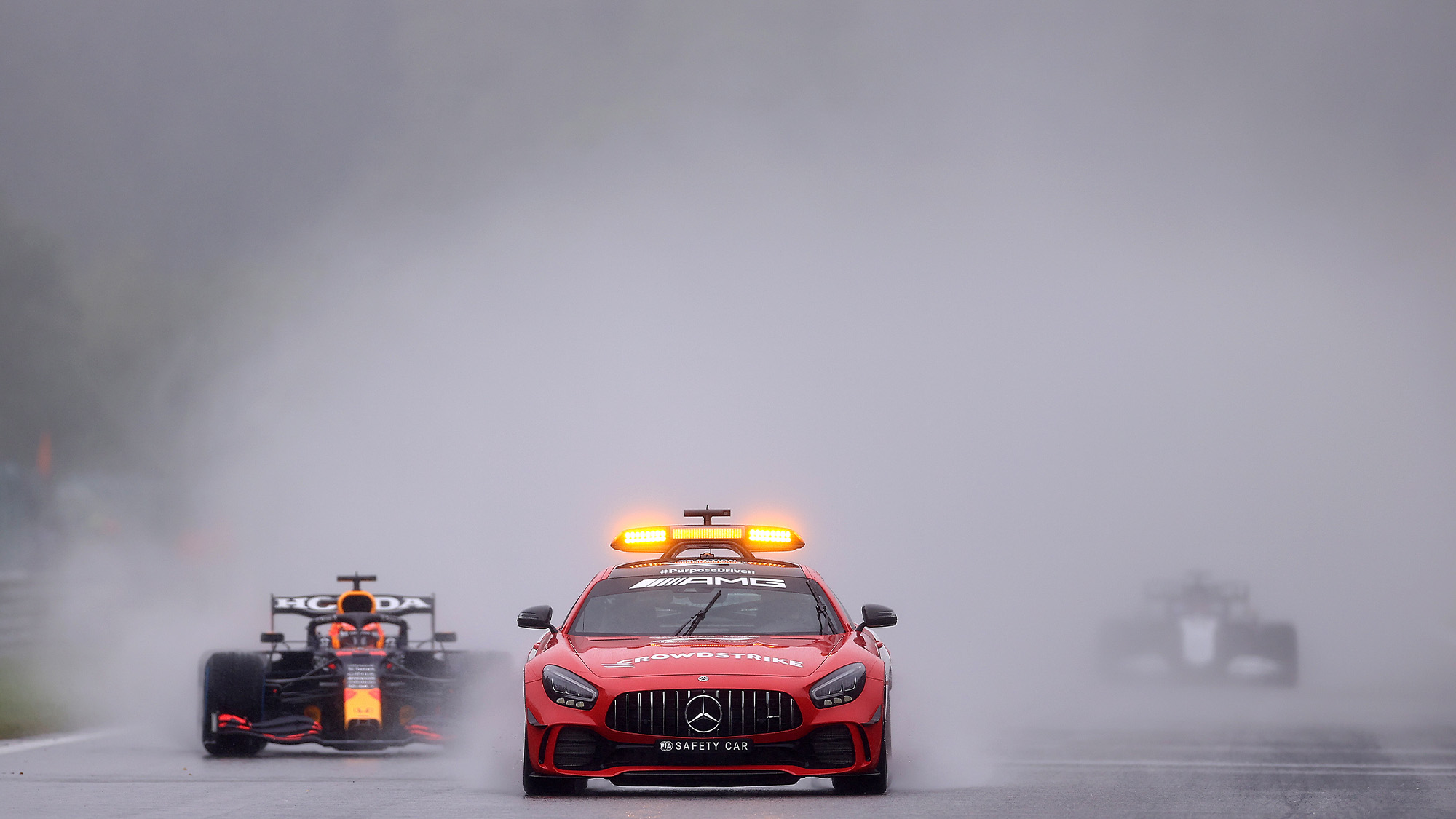 The wet weather that deluged Spa for most of the race weekend remained in force on Sunday afternoon, delaying the original 2pm start time by 25 minutes.

The cars left the grid behind the safety car, soon followed by a stream of radio messages from drivers, relaying the treacherous conditions, even at safety car speeds.

Lewis Hamilton said that he couldn’t see anything behind him and Lando Norris said he could barely see anything in front.

Antonio Giovinazzi described the conditions as “undriveable” and George Russell said that there was “no visibility” — the second-paced qualifier not even able to see the red rain light on Max Verstappen’s car ahead.

That view was overruled as the red flag was waved and the cars returned to the pits. 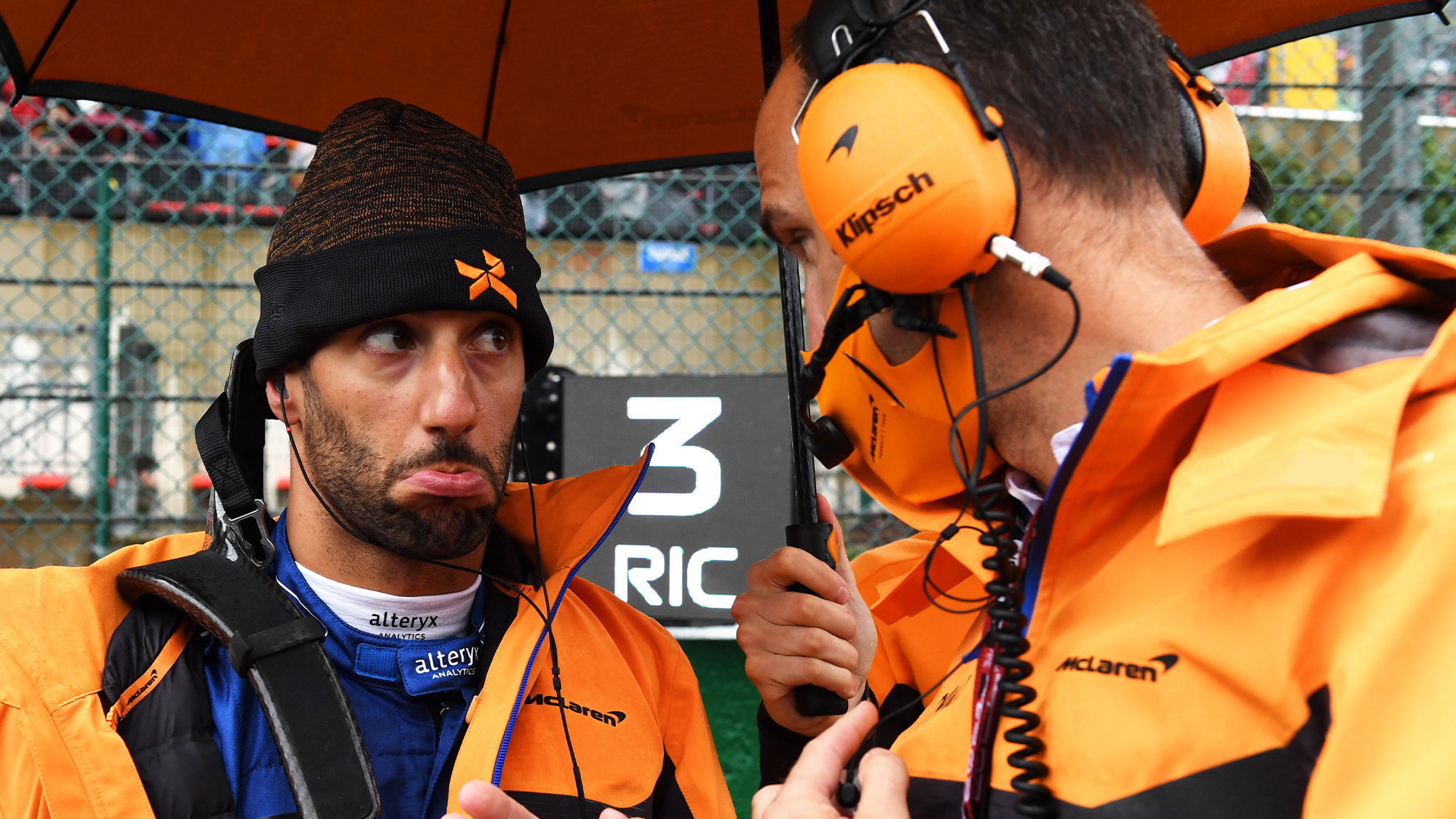 Drivers spent their Sunday afternoon dodging raindrops in the pits

What followed was more than an hour of classic F1 confusion as teams wondered whether the race had started; how many laps were remaining; and whether Red Bull could repair Sergio Perez’s car, which had crashed out on the way to the grid and was thought to be out of the race.

Mechanics were already working apace on the recovered car when news came through that the Mexican would be able to take the restart from the pitlane.

The delayed starts and safety car laps had reduced the notional race length to 39 laps, and the race had not officially started, even though the race window clock had already begun ticking. Grands prix must be completed within three hours (inclusive of stoppages), which is a time limit that was reduced by an hour at the end of last year.

With an hour to go on the clock, the countdown was stopped, with officials citing force majeure to give the rainclouds more time to pass. Race director Michael Masi told Mercedes sporting director Ron Meadows that he was looking for a gap in the weather.

But the rain continued to fall on the resilient packed crowds, their spirits mildly lifted by a Daniel Ricciardo-initiated Mexican wave on the start/finish straight.

By this time, Perez’s car was ready to go, but it would be more than an hour before the race restarted.

News that the cars would finally return to the track was swiftly followed by Lewis Hamilton racing back into the pitlane on a scooter. 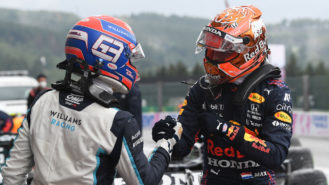 After a month to contemplate an absolutely spellbinding first half of the season, F1 is back, at Spa. Red Bull and Max Verstappen must have spent at least some of…

At 5.18pm, the pitlane light went green, marking the race start, and Bernd Maylander led the field away in the safety car.

But drivers were once again complaining of the conditions and the red flag was waved after two laps; the cars returning to the pitlane for good.

As the second safety car procession counted as part of the race and at least two laps were completed, the result was declared. Half points were awarded because less than 75% of the race distance was completed.

With most finishing as they qualified, Daniel Ricciardo recorded his best McLaren finish in fourth. Nicholas Latifi finished ninth to make Williams one of only two teams to score double points.

But Perez dropped to the back from seventh on the grid after his early crash. Lando Norris lost out on points after incurring a grid penalty after his crash in qualifying; as did Valtteri Bottas who was penalised after causing one of the opening lap crashes at the Hungarian Grand Prix.

Results were taken after lap 1: the penultimate lap before the race was suspended