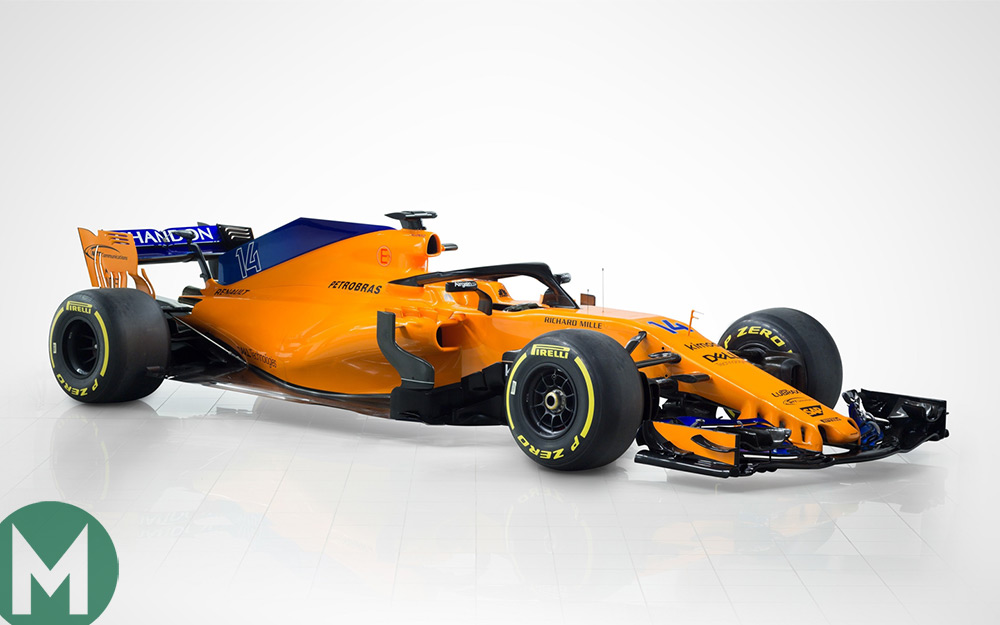 McLaren launched its MCL33 Formula 1 car on Friday morning. The car is painted in ‘papaya’ orange, harking back to McLaren’s early F1, Can-Am and IndyCar days, and most recently Fernando Alonso’s 2017 Indy 500 attempt. Stoffel Vandoorne will partner the veteran driver for the 2018 campaign, with Lando Norris in reserve.

McLaren also makes the switch to Renault engines this season from the Honda powerplant it used previously. Alonso, however, was quick to temper expectations regarding the new Renault-powered car.

“Looking at our new car, I feel incredibly excited – but also apprehensive. I know just how important this car is to the team, and I just hope that it delivers in the way we all want it to,” he said.

“If we’re able to develop the key strengths of last year’s chassis and marry it to an improved Renault power unit, then I think we’ll be able to take a step forwards. The car certainly looks very neat and well thought-out, and I think the new colour looks really great; really eye-catching.”

The two-time F1 champion will also compete in the World Endurance Championship with Toyota this season, and has already competed in in the Daytona 24 Hours.

“My winter has felt somewhat shorter than usual, as I’ve already been in the cockpit for a 24-hour race, and several sports car tests,” continued Alonso. “That said, I’m really looking forward to getting behind the wheel of an F1 car for the first time in three months.”

Racing director Eric Boullier added that the car looks “neat and well-resolved,” and said that “The design, engineering and aerodynamic departments have done an incredible job delivering a new car with a new power unit in an extremely short timeframe.

“That said,” added Boullier, “We are under no illusions that it will be difficult to splinter the hegemony at the front; and that the midfield will be full of well-funded, experienced outfits with plenty to prove. We are humble about the challenge ahead, but feel we’ve prepared well, have a solid package that we can build upon and exploit as the season progresses, and have two excellent drivers who will make the difference in races.”

The car is packaged in a much slimmer body, much like Mercedes’ and Ferrari’s 2018 offerings. According to chief technical officer Tim Goss, the turbocharger is at the rear of the engine and the MGU-H is at the front – an approach also taken by Ferrari. The gearbox was re-designed late into the design stage, along with rear-suspension components.

Zak Brown, executive director, mentioned McLaren’s new sponsors such as Dell and CNBC, though the team remains without a title sponsor for 2018. Brown also explained why McLaren was using a new shade of orange.

“Whether it’s been with brave drivers, brave leaders or brave fortune, this team has always fought back,” he said. “And we definitely view 2018 as the year when McLaren will move closer to the front, fighting teams and drivers as we improve our fortunes.

“Our return to a papaya orange livery for this year wasn’t simply an emotional decision; it demonstrates that we are listening to our fans, building deeper engagement with them and the F1 community as a whole.”

McLaren’s statement added that the new paint choice has significantly reduced the weight of the car, and reduced ‘paint processing time’ by 50 per cent.