McLaren has announced its withdrawal from the 2020 Australian Grand Prix after a team member tested positive for coronavirus.

The team confirmed that following the resulting test, the team member would remain in self-isolation in the care of local health authorities and McLaren would not be taking part in the opening weekend of the Formula 1 season due to this.

“McLaren Racing has confirmed this evening in Melbourne that it has withdrawn from the 2020 Formula 1 Australian Grand Prix, following the positive test of a team member for the coronavirus,” a McLaren statement said.

“The team member was tested and self-isolated as soon as they started to show symptoms and will now be treated by local healthcare authorities. 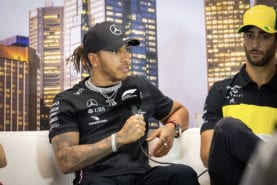 “The team has prepared for this eventuality and has ongoing support in place for its employee who will now enter a period of quarantine. The team is cooperating with the relevant local authorities to assist their investigations and analysis.

“Zak Brown, CEO of McLaren Racing, and Andreas Seidl, Team Principal of McLaren F1, informed Formula 1 and the FIA of the decision this evening. The decision has been taken based on a duty of care not only to McLaren F1 employees and partners, but also to the team’s competitors, Formula 1 fans and wider F1 stakeholders.”

Speculation has grown since teams arrived in Melbourne that the race could be cancelled, with four Haas team members also tested for the virus after showing symptoms, however, the American team has confirmed that all tests returned negative results.

World champion Lewis Hamilton called the decision to stage the race as “shocking” in the pre-race press conference, adding that money was the driving factor for the attempt to host the race despite the worsening situation.

A statement from Formula 1 said: “Following the outcome of the test on a member the McLaren team, F1 and FIA have been in close contact with them on their decision and have been coordinating with all relevant authorities on next steps. Our priority is the safety of the fans, teams and all personnel at the race.”

Earlier in the year, Formula 1 managing director of motor sports Ross Brawn confirmed that should one team not be able to enter a country to race, it would not go ahead, adding that it was up to teams to decide their own participation.

“Obviously if a team makes its own choice not to go to a race, that’s their decision,” he told Reuters.

“But where a team is prevented from going to a race because of a decision of the country then it’s difficult to have a fair competition.”