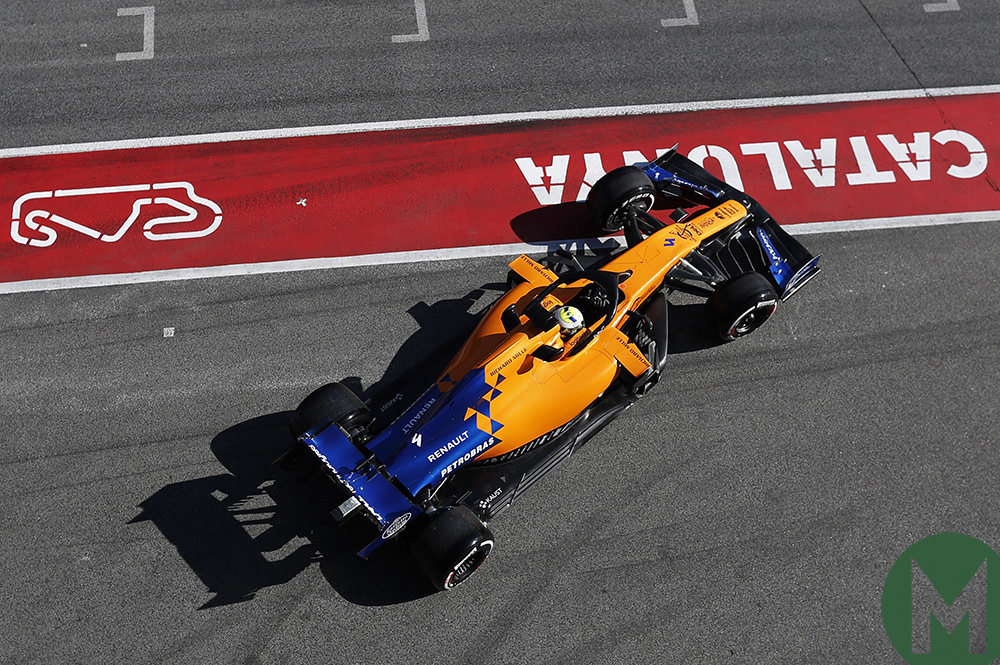 Lando Norris’s McLaren was fastest on the opening day of the second preseason Formula 1 test at Barcelona, with a late effort pipping Pierre Gasly’s Red Bull.

Gasly had topped the times since mid-afternoon but Norris’s 1min 17.709sec mark, set on the softest compound (C5 Pirellis) with half an hour of running to go, beat the Red Bull man by a mere 0.006sec.

Norris’s joy was tempered not long afterwards as he stopped his McLaren on track. That’s after he lost nearly two hours of morning running due to a loss of hydraulic pressure.

Sebastian Vettel’s Ferrari had briefly topped the times after lunch with a 1min 18.206sec mark set on C3 tyres, but Gasly comfortably knocked him off top spot around 15 minutes later, with a 1min 17.715sec set on the same compound. It looked like that time by Gasly would remain unbeaten until Norris’s 11th-hour effort.

Gasly had the consolation of topping today’s mileage charts, with 136 laps completed.

Vettel later improved to a 1min 17.925sec, again on C3 tyres, but was relegated to fourth in the final order first when Lance Stroll’s Racing Point jumped ahead during the last hour with a 1min 17.824sec set on C4 tyres. Stroll finished the day third.

Antonio Giovinazzi was fastest in the morning session for Alfa Romeo with a 1min 18.589sec on C4 tyres. He didn’t improve in the afternoon and ended the day fifth.

Alexander Albon, for Toro Rosso, also improved late on, with a 1min 18.649sec on C4 rubber getting him sixth overall.

Ferrari split its driving duties and Charles Leclerc’s 1min 18.651sec set in the morning on C3 tyres meant he was seventh in today’s order.

Mercedes’ underwhelming testing running continued as it lost most of the afternoon having to change its engine after Valtteri Bottas stopped on track with an oil pressure issue. At this point Bottas had completed only one lap and hadn’t set a lap time.

He returned to the track in the final 10 minutes of the day and set a 1min 20.167sec on C2 tyres to end up 11th in the order with just seven laps under his belt.

His team-mate Lewis Hamilton undertook Mercedes’ morning running and his 1min 20.332sec on C2 tyres was good enough only to end the day 12th out of 13 runners.

Williams though had a more encouraging day after its severely truncated opening test. The car in George Russell’s hands completed 119 laps though his best time, a 1min 19.662sec set on the softest C5 rubber, got him only ninth place in the final order.

Renault, as it did on the opening day of the first test, did not appear to focus on setting stellar times. Nico Hülkenberg, who did the morning’s running, was 13th, and last, overall with a 1min 20.348sec set on C3 tyres.