Mercedes doesn’t know what caused the gearbox issue that forced it to miss most of this morning F1 testing session.

The issue “came out of nowhere” after Valtteri Bottas had completed just one installation lap, left the new W12 in the pits for most of the morning on one of only three days of testing.

Team principal Toto Wolff said that the delay had left the team without any further leeway and that it would not be able to recover from any further problems this weekend.

“We weren’t very fast this morning, because we only did one lap with an aero rake,” said Wolff, after Bottas had been able to complete just six laps. “It wasn’t a good start.

“We had a gearbox issue that came out of nowhere that we haven’t yet been ready to identify and understand.

“If we are able to have a smoother ride from here onwards, then I think we can recover. If we have more stumbling blocks then, obviously, with three days there’s not a lot you can do.”

There was a delayed start to the afternoon session for the team, as Lewis Hamilton didn’t run immediately in sandstorm conditions.

Mercedes was the focus of attention as the car were assembled for a photoshoot this morning, thanks to its wavy floor that’s aimed at directing airflow to recover the downforce lost by new regulations for this season. 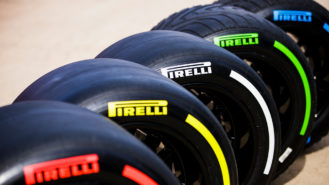 2022 F1 testing tyres: why Pirelli has a black-walled prototype in Bahrain

New 18in wheels give Formula 1 teams even more to think about in 2022, and they will have six different tyre compounds to use in the final preseason Abu Dhabi…

The team was secretive about the floor when it launched the car, and Wolff gave little away when asked about it today.

“I think if I were to start with the benefits of the floor for aero purposes, you will probably get the wrong information,” he said.

“I think it looks good — optimising the flow around the lack of aerodynamic performance that we have with the new regulations, and let’s see whether it can be translated into real performance.”

Wolff also refused to say where Mercedes had spent its development tokens, saying cryptically: “I’m sure you haven’t seen all the cars in the specification that they are going to be raced in Bahrain.”

The reason for his guardedness was clear later in the conference where he admitted that Mercedes would be studying rivals’ cars to analyse their developments.

Asked what he had spotted on competitors’ cars, he said: “The days would be spent with our photographers, trying to capture some parts of the car. Obviously, not copying from photos.

“I think it’s too early to say there is a specific part that that performs well because things maybe look funky for non-aerodynamicists but not proving that they are really changing everything in terms of performance.

“That analysis will be made after the test.”