For the first time since 1985, when Niki Lauda scored the last of his 25 GP victories, Zandvoort returned to the F1 schedule. Can it really be 42 years since I slept under the stars at Scheivlak corner to get a good view of that race where the irrepressible Gilles Villeneuve reversed back onto the track and drove three-quarters of a lap with his left-rear wheel hanging off? Sadly, it appears so!

There was always a great atmosphere at the seaside track half an hour from Amsterdam. I last visited for F3 in ‘87, when Autosport’s temp secretary booked us into a restaurant for three nights instead of a hotel. Great gastronomically but not conducive to helpful sleep! But there’s probably not much of that to be had in Holland this evening either, as the orange army celebrates Max Verstappen’s sixth pole in seven races.

Seemingly oblivious to any kind of pressure, Verstappen and the Red Bull looked mighty from the moment the cars took to the track on Friday morning, especially in Turns Two and the banked Turn Three, where he was taking a couple of tenths from Mercedes in that sector alone.

The superiority was not obvious on the free practice time sheets though because, as many predicted, the tight track’s action was hectic, there was incident aplenty and it was not until midway through FP3 on Saturday morning that Verstappen got his first soft-tyre clean lap. His long run pace looked mighty though, an average three-tenths clear of Valtteri Bottas as Lewis Hamilton had much of his opening day curtailed by a power unit issue in the morning and multiple red flags in the afternoon. In fact, across four hours of track action up to the end of qualifying, we had no fewer than six red flags! 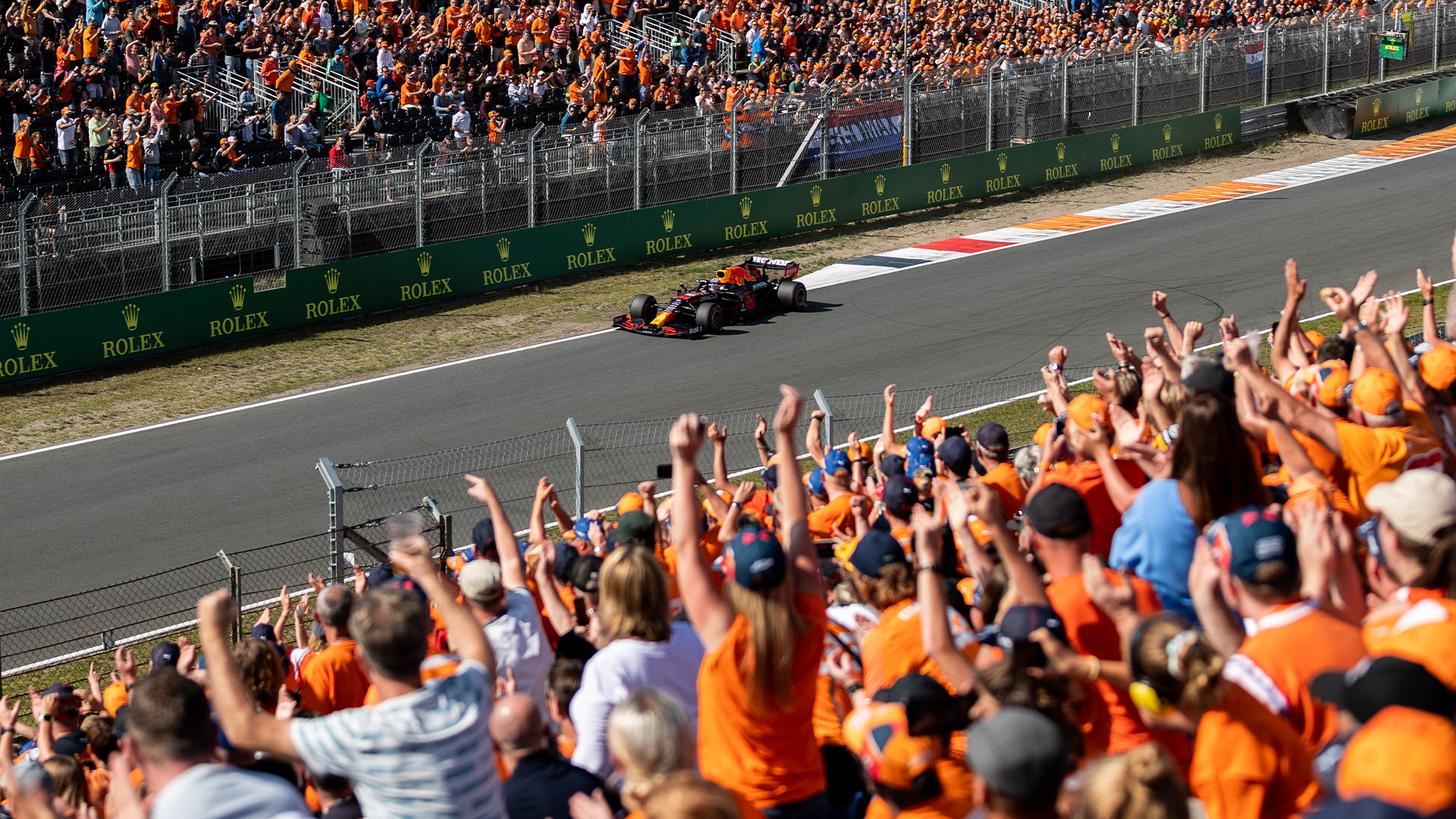 Home advantage for Verstappen this weekend

The presence of gravel traps and proximity of the barriers meant that an incident was never far away. But pair that with a high level of track evolution and you had a qualifying conundrum: leave it late and you would be quicker, but dare you risk session-scotching yellow or red flags?

After Charles Leclerc’s Ferrari topped Q1, Verstappen wowed his supporters with a 1min 09.071sec lap to top Q2 and improved to 1min 08.885sec on his second Q3 run. Out of the final corner though, his DRS had not opened and so Max had given away a tenth, perhaps a tenth and a half as he crossed the line. Would that allow Lewis Hamilton in?

Nearly. After a Herculean effort, Lewis missed out by just 38 thousandths and will join Max on the front row for the fifth time this year. It was close enough for Red Bull to know they won’t have things their own way tomorrow. As Hamilton said, “strategy will come into it.” 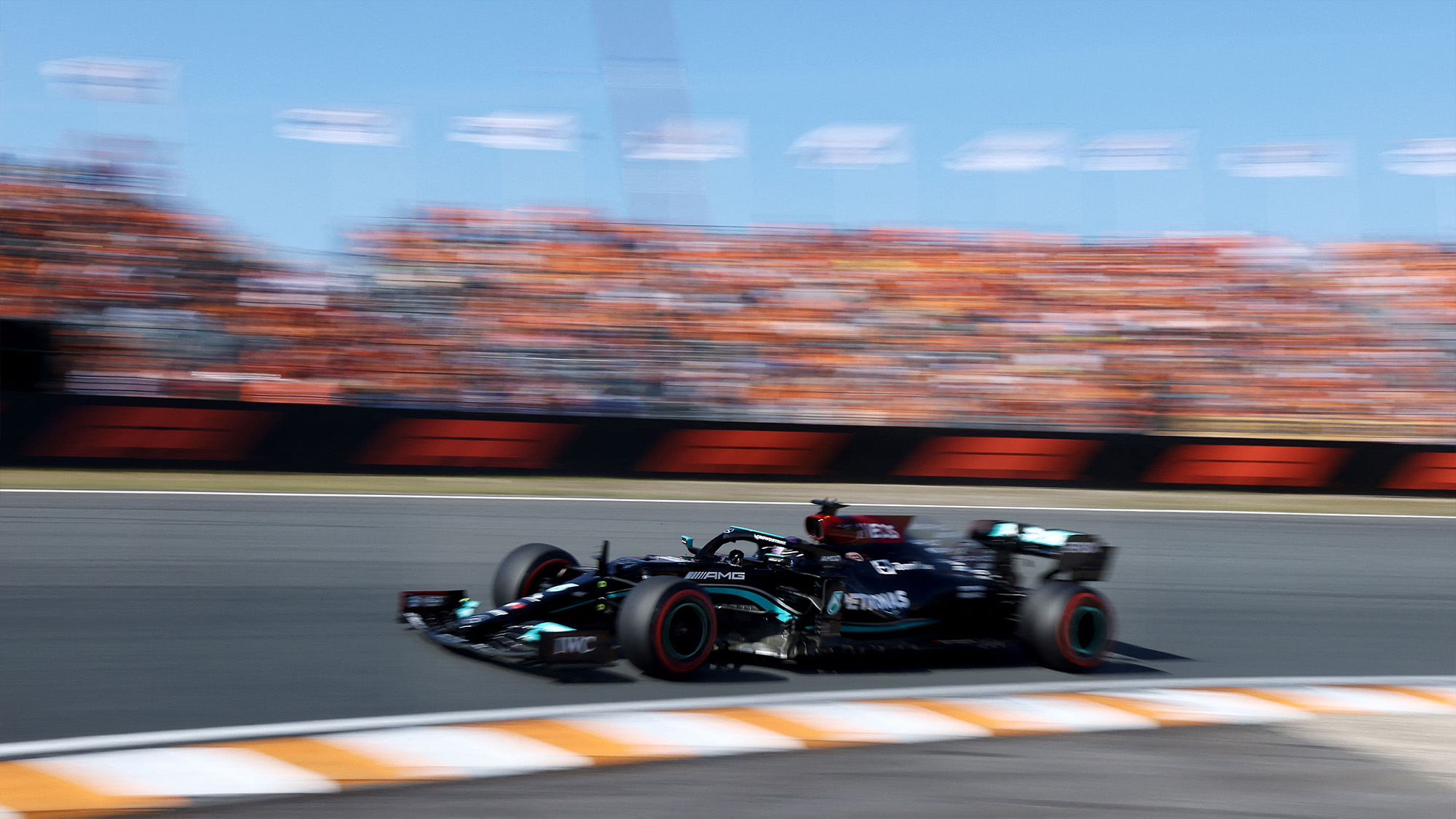 With similar asphalt to that at Paul Ricard and the resurfaced Silverstone, the teams are expecting tyre degradation despite Pirelli bringing the hardest compounds in its range. With so many right-handers, and the last corner banking, the left-hand tyres take a pounding, but with nobody able to do more than 12 laps on the opening day, nobody has much of a clue as to just how much. So, expect the unexpected when it comes to one versus two stops.

Mercedes is nicely placed with Valtteri Bottas third on the grid, three-tenths behind Hamilton. Red Bull, by contrast, lost Sergio Perez in Q1 when dawdling cars in front of him meant he missed getting across the line for his final run by 1sec, and was caught out by the track evolution. With overtaking likely to be somewhere between Monaco and Budapest on the feasibility scale, the Mexican is unlikely to feature.

One man who might though, is Pierre Gasly, whose AlphaTauri, which Toto Wolff refers to as Red Bull’s shadow-car, qualified a fabulous fourth. That equalled the Frenchman’s career-best in Baku, which he converted into a podium.

Crucially, that was good enough to beat Charles Leclerc, himself just a hundredth clear of Ferrari team-mate Carlos Sainz. On the soft compound tyre the Ferrari looked very quick on the opening day and also topped Q1, but its race pace on Friday afternoon was not strong, suggesting that the Maranello machines might prove to be log-jammers. 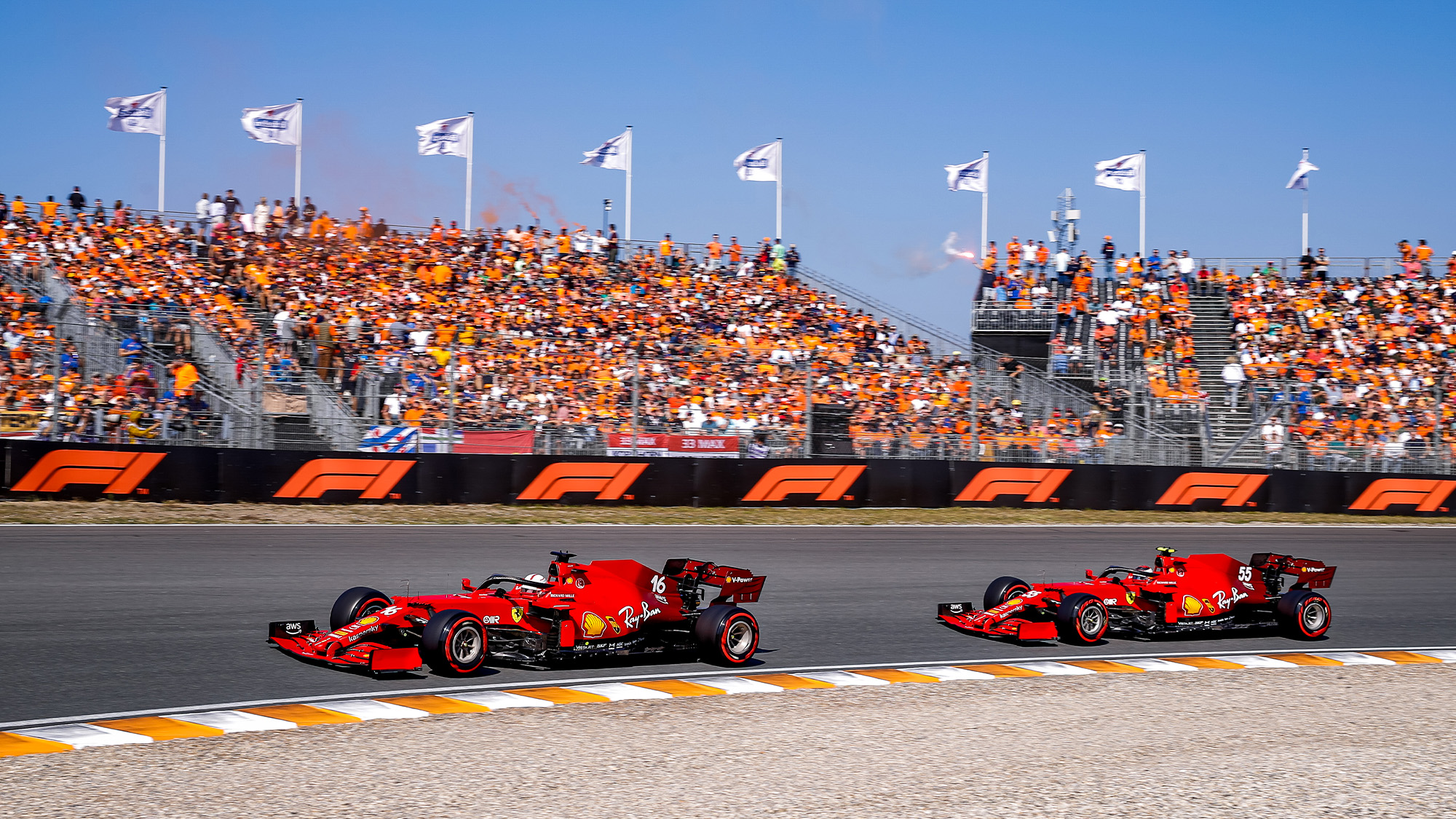 Just six-hundredths behind Sainz was an inspired Antonio Giovinazzi in the Alfa, the Italian currently fighting for his F1 career, with names such as Bottas, Formula E champion Nyck De Vries and even ART F2 driver Theo Pourchaire (a Sauber junior) mentioned in connection with an Alfa seat.

With team-mate Kimi Räikkönen announcing his retirement at season-end and then testing positive for Covid, Giovinazzi was spearheading the team effort as Robert Kubica was presented with the unenviable task of stepping in at the 11th hour for his first race since Abu Dhabi for Williams at the end of 2019. The Pole went out in Q1, 18th and some 1.3sec behind his team mate (who was fourth!) but in reality, did a solid job to go quicker than both Haas machines. 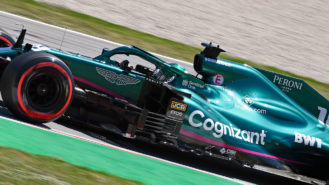 Have Mercedes found yet another brilliant innovation to squeeze even more horsepower out of its engine?

The Alpines oh-so-nearly fell over each other on their final Q3 ‘out’ laps, Esteban Ocon meandering along as Fernando Alonso dived around his outside. Esteban inadvertently almost took Fernando off as he moved right but it all worked out in the end, both got their laps in and the Frenchman went 7-6 up in his season’s qualifying battle with Spaniard, by two-hundredths.

For the first time since Barcelona, Daniel Ricciardo had more pace than Lando Norris and was the sole McLaren representative in Q3 as Norris went out in Q2 for the first time this year. He will start 13th.

“It was just small things,” Lando said. “The competition was even tighter with the Alpines and Alfa closing the gap and without that strong lap it was going to be hard to make Q3. It was possible, as Daniel proved, but I didn’t really have the confidence in the car to get the best out of it, which I’m annoyed about. Here at Zandvoort, it’s not ideal…” Ricciardo himself was at a loss to explain why he managed to go quicker in Q2 than in Q3. 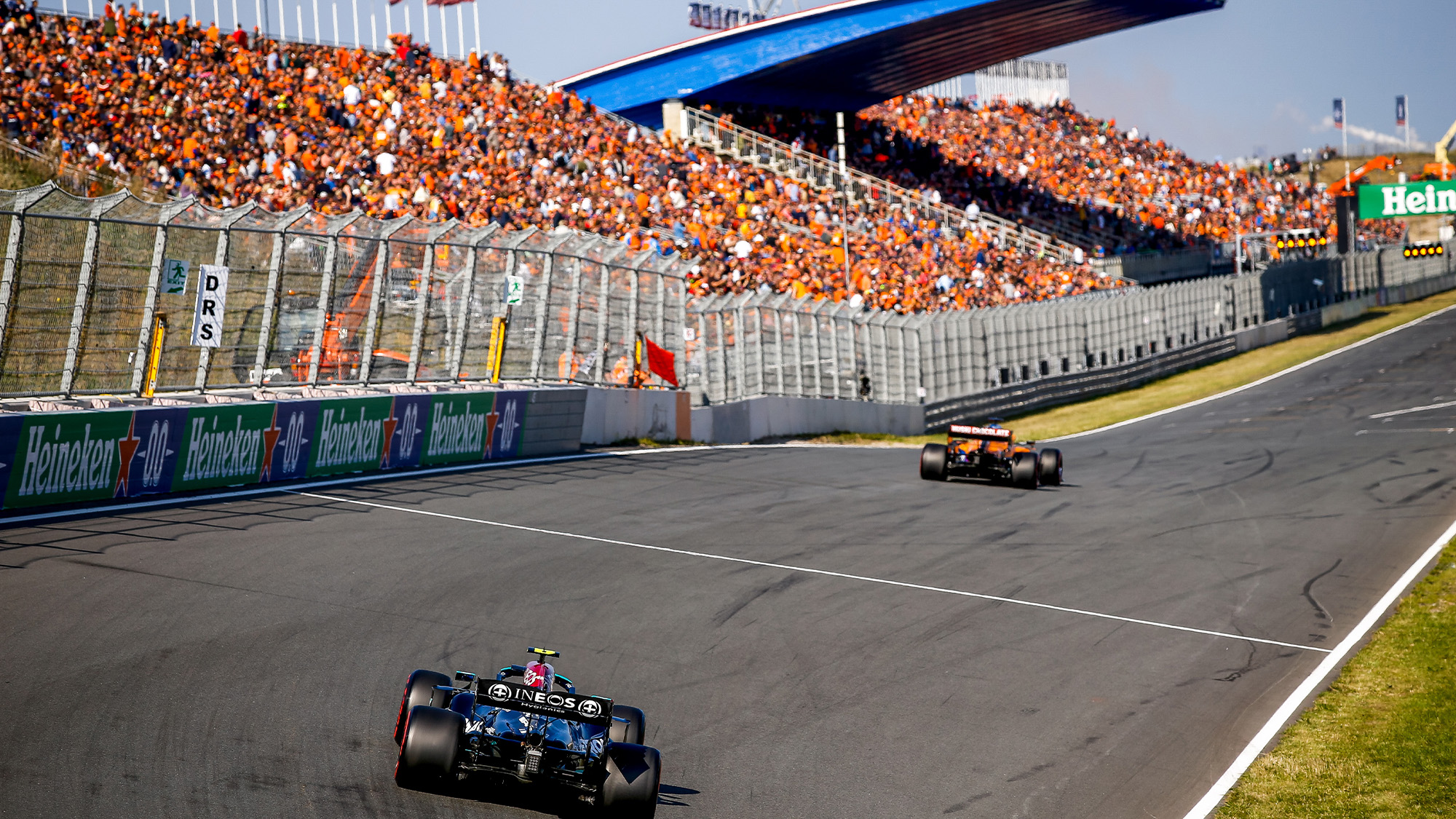 Red flags and traffic made caught out the unwary in qualifying

Williams looked to be in decent shape when Nicholas Latifi managed fifth quickest time in Q1, with George Russell 11th. In Q2, Russell was fifth on the opening run and was on a mega lap when he carried too much speed into Turn 13 and lost the rear end. He went backwards into the tyres, prompting a red flag which was perhaps a bit premature as Russell got going again. Suspension damage spelled the end of his qualifying, however. When the session was restarted, Latifi had a carbon-copy shunt but with an even heftier impact, giving rise to speculation that the wind-sensitive Williams was affected by a cross-wind at T13. Russell, however, held up his hands and admitted to simply pushing too hard.

Although there is still no official confirmation, take it as read that Russell will be in a Mercedes next year. You have to hope that Brixworth comes up with a decent flat-bottomed car and, if so, it’s going to be fascinating to see the performance level relative to Hamilton. Lewis must be eyeing his pace with the same kind of trepidation that Fernando Alonso will have witnessed some of Lewis’s ’06 GP2 drives. No wonder he talked up Bottas at every available opportunity!

To a man, the drivers love Zandvoort. Particularly, as Verstappen said, when the fuel comes out. They love the banking, the blind exits, the roller-coaster ride and the constantly varying cambers. But as good as it is to drive, how well-suited will it be to a race? 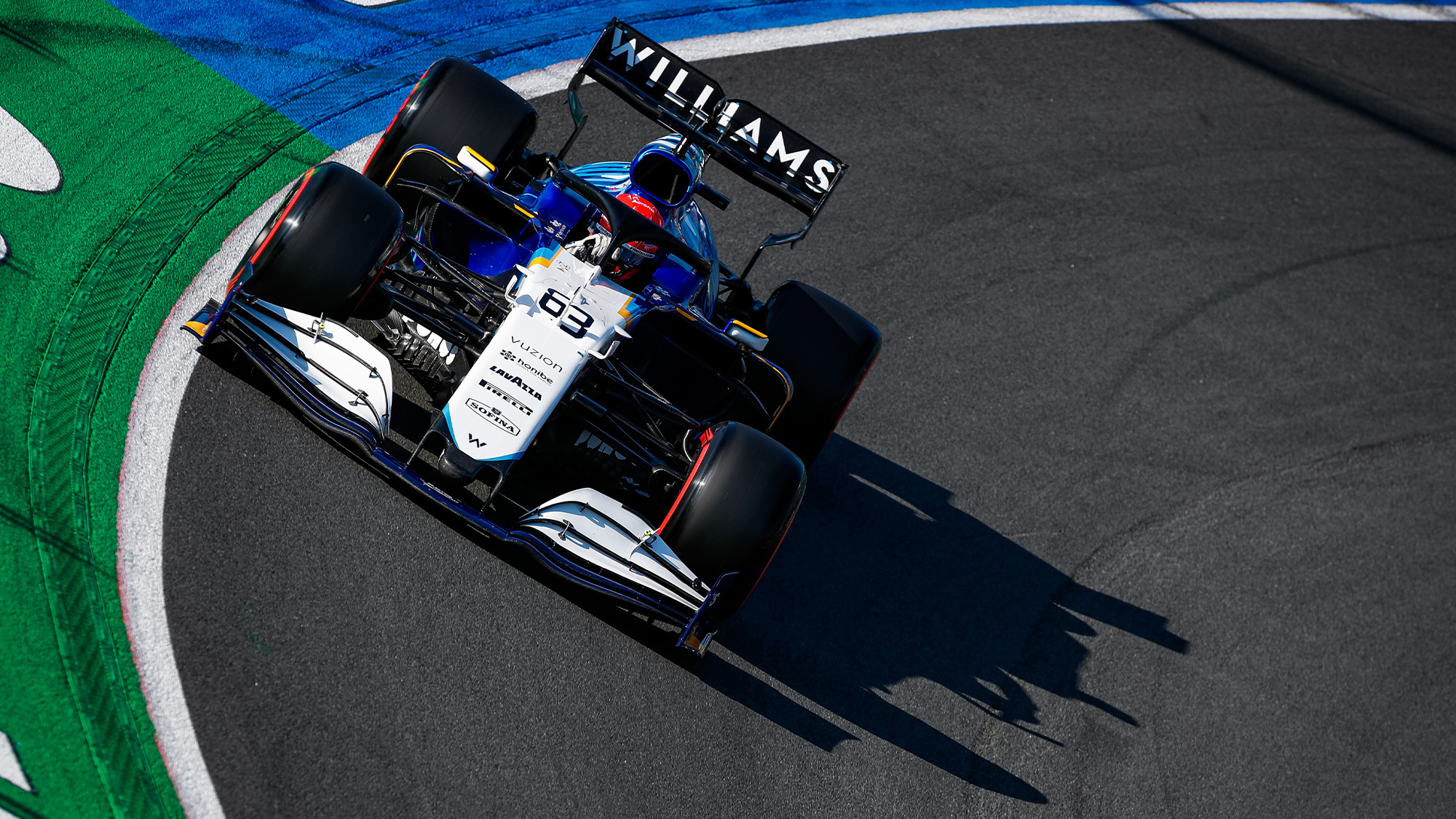 The theory was that there may be varied lines at the banked Turn Three. The quickest way is to use the high line, but at the risk of having someone go inside you, preventing the quick exit. The reality though, is that going low unloads the left-front and prompts a lock-up. Some though, will probably still try it, heavy with fuel, on the opening lap. As Leclerc said, “that first lap is going to be interesting, but opportunity might be limited after that.”

What about the outside of Tarzan, the first corner, apparently named after a local character who only allowed his vegetable patch to be commandeered for the track build if he had a corner named after him!? That’s unlikely to come off either. Just ask Mario Andretti…

There may not be much in the way of overtaking tomorrow, but on the evidence of the last couple of days, it certainly won’t be dull. I wouldn’t like to bet that we’d get through without a red flag and strategy will be of the suck-it-and-see variety. All amid a boiling cauldron of an atmosphere. Max is the obvious pick but, this season, who knows. Just don’t miss it!