Following his sizeable crash during the Emilia Romagna Grand Prix, Mercedes says it is working hard to salvage as much of Valtteri Bottas’s W12 as possible ahead of the Portuguese Grand Prix.

On lap 32 of last weekend’s race, Bottas was hit by George Russell as the Williams driver attempted an overtake heading into the Tamburello chicane, and the impact with the barriers left both cars heavily damaged.

In the break between Imola and Portimao, Mercedes says it is working quickly to assess the extent of the damage and how much of the chassis Bottas used in the race is salvageable for future use.

While Bottas walked away from the crash under his own power, Mercedes trackside engineering director Andrew Shovlin revealed the Finn had come away with a bruised knee, though was otherwise unharmed. 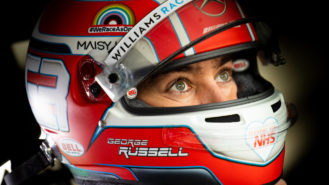 “It was a big crash we were seeing around 30G at points in his trip around the walls and the track,” Shovlin explained.

“Unfortunately the car’s not done quite so well so there’s a fair amount of damage to that we’ve managed to bring a lot of it back to the UK. We’ve got the power units at Brixworth where that’s being checked and inspected carefully, and we’ll just pick through this.

“Some of the bits we might be able to salvage but unfortunately quite a lot of it is beyond repair. We’re just looking at a logistics plan to try and be able to get sufficient parts to Portimao, which is the week after next, to make sure we can run both cars in the correct spec.”

Following the race, team principal Toto Wolff admitted that the crash could have a lasting impact on the team’s season. The budget cap introduced at the start of the year has pegged teams’s spending and eat into Mercedes’s planned upgrade budget.

“Our car is almost a write-off and in a cost-cap environment that is certainly not what we needed, and probably it’s going to limit upgrades that we’re able to do,” Wolff said after the Imola race.