Ferrari’s 1997 F1 challenger wasn’t the fastest car on the grid. It wasn’t even the second-fastest car and yet Michael Schumacher arrived at the final race of the season leading the championship.

Finishing ahead of Jacques Villeneuve would make him world champion in his second year at Ferrari; the first drivers’ title since Jody Scheckter in 1979.

Of course, it didn’t happen. The action of a split second, 23 years ago today, would overshadow the achievements of an entire season as Schumacher’s ruthless streak emerged in dramatic and controversial fashion. His valiant second place in the championship was stripped from him.

As Lewis Hamilton moves beyond Schumacher’s record of Formula 1 wins, Motor Sport has re-examined the career of a driver who combined exceptional speed with a will to win at all costs: a seven-time champion with as many detractors as admirers.

In the latest issue of the magazine, available later this week, Mark Hughes assembles an all-star cast to discuss Schumacher’s machine-like technique and uncover the real person behind the mask.

As evidenced in 1994 at Adelaide against Damon Hill, the dark art was buried in the Schumacher toolbox and reachable when he had all to lose — or gain. Being cast as the villain was the price to be paid for glory.

Three years later, Schumacher’s rise to greatness was well underway. His switch from Benetton to Ferrari had not yet provided him with a title but the pieces were in place at Maranello and the Schumacher-Jean Todt-Ross Brawn trifecta had started to bear fruit.

Five race victories in 1997 and a number of retirements for seven-time race winner Villeneuve set the stage for the 1997 showdown between the two. The Ferrari driver topped the championship by a single point going into the final round.

“He looked, and he went quiet and realised that things hadn’t been quite the way he thought they were”

On lap 48 of the 1997 European Grand Prix, Williams’ Villeneuve dived up the inside of title rival Michael Schumacher in a brave late-braking manoeuvre that looked to be judged it to perfection. The Canadian had not counted on his Ferrari counterpart turning in and hitting him, though.

The subsequent whack to the sidepod of the FW19 was enough to slightly dislodge electrical innards and leave a cosmetic souvenir from the incident, but not enough to take Villeuenve out of the race like Schumacher might have hoped.

Instead, it was the German who found himself stranded and out of the race, beached in the gravel and left to stew on a flashpoint moment, as viewers studied the replays to judge what his intentions truly were with the half-hearted decision to close the door.

Martin Brundle pointed out in commentary at the time: “That didn’t work Michael. You hit the wrong part of him, my friend.”

It was another high-profile blotch on an otherwise impressive copybook and it would not be the last either. At the time, Schumacher was sure he had been the one wronged, and as former Ferrari technical director Ross Brawn noted, it wasn’t until the adrenaline wore off that he saw what had really unfolded.

“In the end, Michael moved in on Jacques and tried to knock him off,” Brawn surmised in the recent Race to Perfection documentary series talking about the incident. 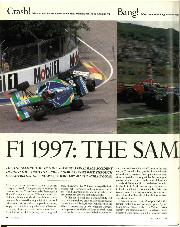 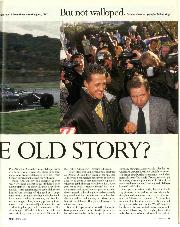 It ended, alas, in controversy, as we have come to expect of World Championship deciders in the contemporary era. Towards the end of the European Grand Prix at Jerez, Jacques…

“It was a mistake by Michael, he shouldn’t have done it.

“Interestingly, when he came back into the pits, he had a completely different mental view of what had happened. It wasn’t until he saw the TV that he realised what had really happened.

“He came back to the pits and he was telling us, ‘we have to get Villeneuve disqualified,’ and I said ‘Michael, you really need to look at the TV because it really doesn’t look that way I’m afraid.’

“He looked, and he went quiet and realised that things hadn’t been quite the way he thought they were from the cockpit.”

The incident earned Schumacher no sympathy in the eyes of the FIA, who elected to strip him of his 78 championship points from the 1997 season. The repercussions went far beyond that year: Schumacher’s legend, in the eyes of many, forever diminished.

It was not the final action from Schumacher that earned criticism either. His parking at Rascasse to prevent Fernando Alonso from securing pole for the 2006 Monaco GP was a blatant example that the trickery hadn’t been totally discarded.

Rubens Barrichello’s close call with the concrete wall during the 2010 Hungarian Grand Prix showed that cut-throat aggression and borderline nature hadn’t vanished in the intervening years away from F1.

“I think, when you’re in the cockpit, you’ve got the helmet on and things are happening around you, you act instinctively, and Michael’s final failure mode was to act instinctively to defend the position,” Brawn added.

“He was so competitive that that’s what he did.”