In a lacklustre 2002 F1 season, the Belgian Grand Prix stood out as Michael Schumacher, at his Spa-Francorchamps fiefdom, put on a stunning demonstration 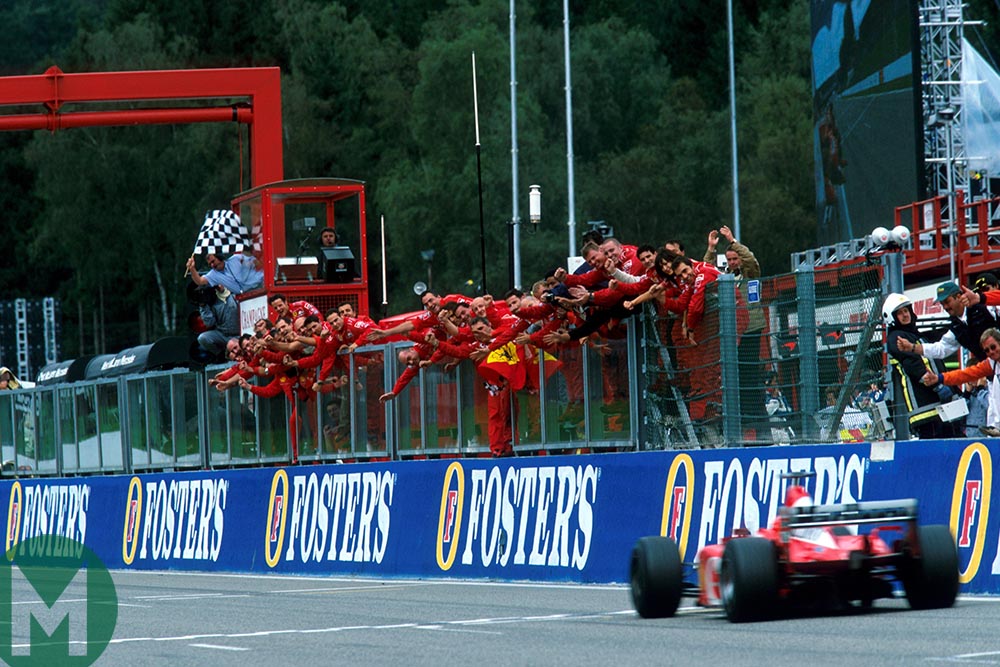 In Formula 1 it often pays to look a little deeper. The 2002 season, to put it mildly, is not one viewed with great affection. It was, in Nigel Roebuck’s words, “the most soporific season on record”. Mainly due to insulting Ferrari domination.

“Half a century ago, motor sport attracted a tiny fraction of the global following it has today. So when Ferrari won every round of the 1952 world championship, and Alberto Ascari every round but one, nobody complained very much,” Simon Taylor observed for Motor Sport at the time.

“Today, after the most monotonous grand prix season since then, world-wide television coverage has made F1’s troubles very public, and newspapers around the world have splashed loud criticism, well- and ill-informed, across their sports pages. But what worries F1’s big noises isn’t the criticism: it’s the commercial implications of falling TV audiences.”

We all know about the Ferrari ‘dream team’ with Michael Schumacher backed by Jean Todt, Ross Brawn, Rory Byrne, engine man Paolo Martinelli and others. It won five drivers’ and constructors’ championship doubles from 2000 to ‘04. And appropriately the one right in the middle, 2002, was the most crushing. 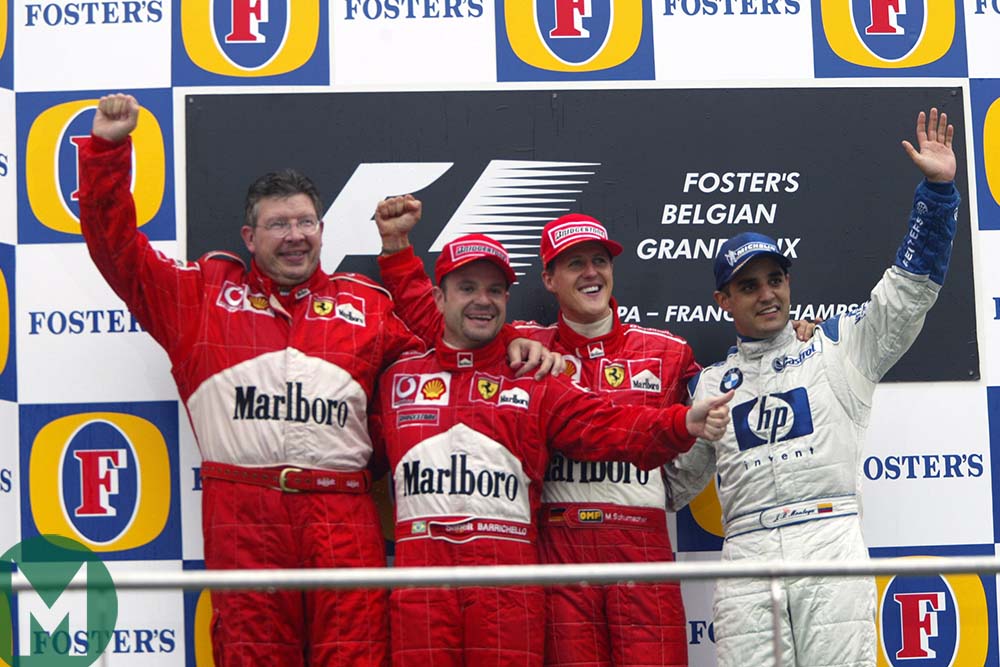 There were 17 races that year, and Ferrari won 15 of them. Moreover, for Schumacher the 17 rounds divided up as 11 won, five second places plus a single third – and that on a day when his front wing was knocked off at the first corner…

Plus four of those five second places were to team-mate Rubens Barrichello and all of them appeared at least to some extent ceded.  Schumacher mathematically wrapped up the title in July.

Perhaps most regrettably for those watching on, Ferrari took risk-averse race management to an extreme, witnessed quintessentially with Barrichello, notoriously, gifting Schumacher Austria’s win on the line.

Schumacher had has own reason to regret this stage management. With the Ferrari pair cruising in formation out front, often at half throttle it seemed, there was little outward demonstration of his personal contribution.

Therefore Schumacher’s 10th win of the year, in the Belgian Grand Prix at Spa, stroking home 2sec ahead of Barrichello, doesn’t on the face of it have much to distinguish it. This was despite too that it ensured a couple of remarkable landmarks: Schumacher’s victory set a new record for wins in a season, and astonishingly it was Ferrari’s 50th consecutive podium. 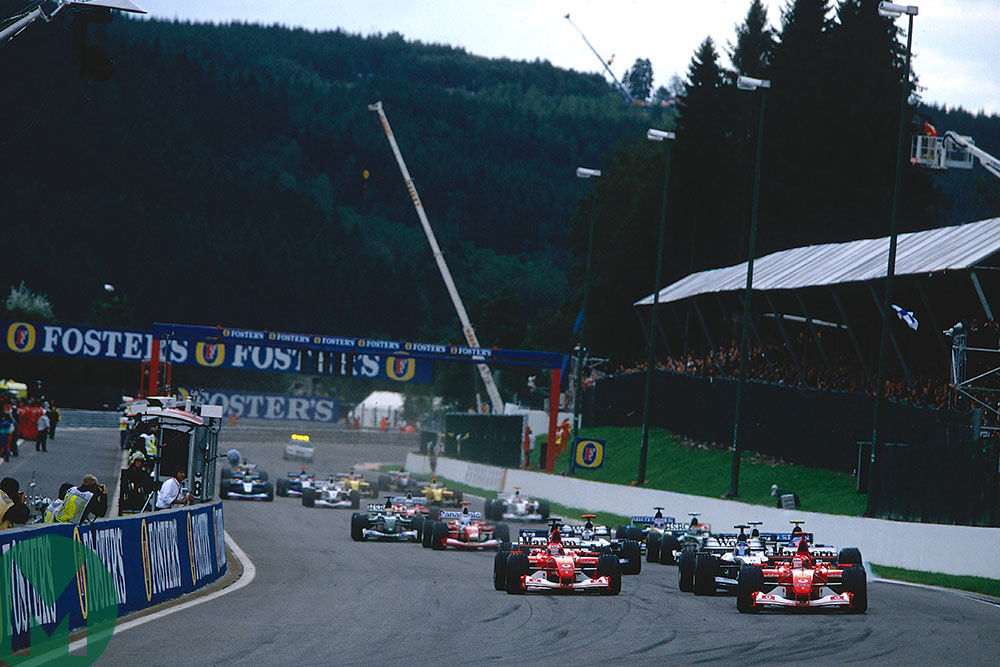 Schumacher about to disappear into the distance Photo: Motorsport Images

“It brought another race whose result, once the field came out of La Source on lap one, was never in doubt,” said Taylor of Belgium’s fare.

Yet there was something more immediate to distinguish it if you knew where to look. Taylor spotted a clue in the preceding round, in Hungary, wherein Schumacher obediently followed Barrichello home.

“With both drivers’ and constructors’ titles effectively locked away, Ferrari’s only remaining task is to ensure Rubens Barrichello is runner-up,” Taylor noted for Motor Sport. “So Barrichello was told to win the race and Michael Schumacher to finish second, and this they duly did.

“Soon the red cars were so far in front that they were able to ease right off, circulating comfortably in the 1min 19sec bracket. Then, with five laps to go, Michael Schumacher suddenly did one lap in 1min 16.2sec.

“It was easily the fastest of the race – Ralf Schumacher’s best that day was 1min 17.7sec, [David] Coulthard’s 1min 17.2sec. He wanted to remind everyone that he is world champion because he is the fastest driver on the grid. In one single lap it summed up the story of 2002.”

Then in Belgium’s following round Schumacher emphatically took this a stage further. Clearly he considered ceding Hungaroring victory one thing; ceding Spa another entirely.

The spectacular Spa-Francorchamps circuit was Schumacher’s personal fiefdom. In his ‘first’ career he won there six times – another record – in 13 visits. He could also add three second places, one win lost to a technical disqualification, another to an accident in blinding spray, another to a brilliant late pass. He might also even have won there on his F1 debut had his Jordan kept going… 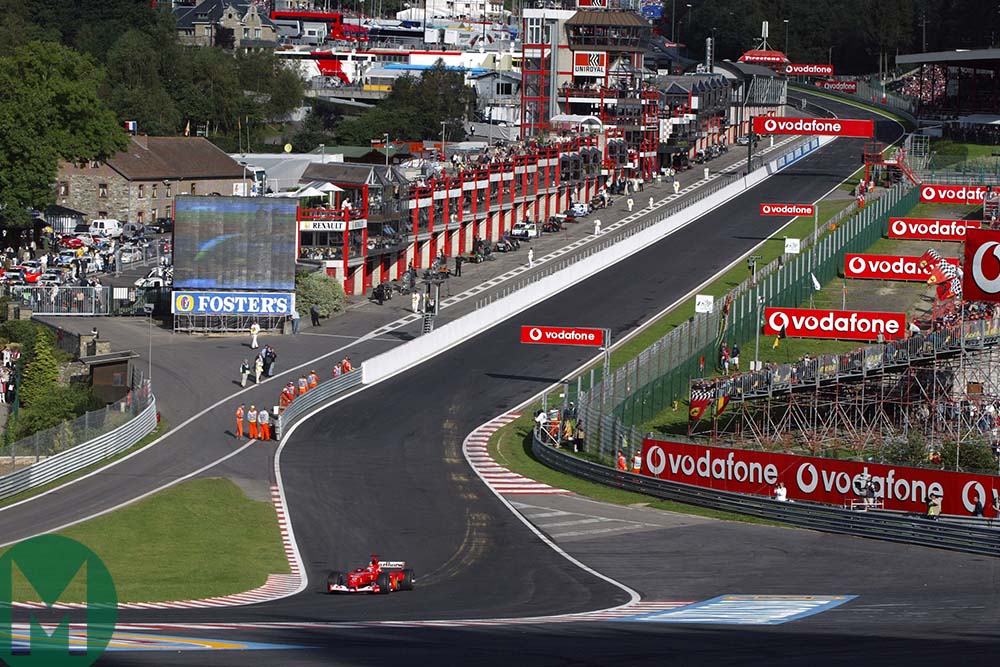 Schumacher was on his own for most of the race Photo: Motorsport Images

And at Spa in 2002 Schumacher cut loose. He took pole marginally from an inspired Kimi Räikkönen in his McLaren – who might indeed have pipped him without gravel dumped on the road for his final flyer – but there was nothing marginal about Schumacher’s race advantage.

He was 2.3sec clear after one lap – Barrichello had got ahead of Räikkönen at the launch to run second. After 15 laps – around a third’s distance – Schumacher was near enough 14sec up the road on his team-mate. Once the final pitstops were done his advantage was a gaping 25.8sec. Then – minded of others’ engine failures that day – he turned everything down and finished just ahead as outlined.

Schumacher afterwards seemed almost embarrassed at the scale of his triumph, yet Brawn was more forthcoming. “Spa is a track that Michael really loves, and one where his talent and skill shine the brightest,” Brawn noted. “He was exceptional all weekend – just sublime.”

“Michael could have stroked it,” added Roebuck, “but at this track he adores he simply indulged himself. Soul-destroying for his rivals, glorious for those who watched.”