The fact that Romain Grosjean survived his opening-lap crash at the Bahrain Grand Prix is “truly a miracle”, according to his Haas team-mate Kevin Magnussen.

Grosjean had been trying to find clear air out of Turn Three and veered across the road towards the inside of the track but made contact with Daniil Kvyat in the process, pitching the Haas head-on into the armco. Grosjean’s car was split in two as the barrier failed and a huge fire instantly broke out, with the Frenchman emerging from the flames as he managed to extract himself from the survival cell despite it being wedged in the barrier.

The race was halted for over an hour as the fire was extinguished, wreckage recovered and barrier replaced by concrete blocks, while Grosjean was airlifted to hospital after examination at the medical centre, where he was diagnosed with minor burns but no broken bones.

“It was just shocking really,” Magnussen said of the incident. “An unbelievable crash. Not what you want to see. It made me very nervous and made getting back in the car slightly strange because you just want to know that Romain is all good. But to see him walk away from that crash is frankly unbelievable. I think that’s the worst crash I’ve ever seen and for him to be alive is truly a miracle.”

Magnussen was not alone in admitting that driving again was difficult. Although some drivers tried to put a brave face on matters, the admission of others that it was hard to put out of their minds betrayed the likely emotions being felt by all the drivers during the red flag period.

Daniel Ricciardo was relieved to see Grosjean survive, but then his emotion turned to anger as the F1 television director showed multiple replays on the world feed during the long break in action.

“To be honest I don’t really want comment too much on the race, I just want to express how angry I am at Formula 1,” Ricciardo said. “The way they chose to broadcast Romain’s incident over and over and over again – all that we need to see is that he’s OK. We don’t need to see every screen we look at, a ball of fire and all of this. His family has to keep watching that. Our families, knowing that we’re getting in the car in an hour had to watch it, watch it…

“I want to use harsher words but it’s so inconsiderate and I was just disgusted with the way they chose to play that. It felt like it was a game, it felt like it was entertainment, and it was all for the wrong reasons. I felt like they could all go f*** themselves to be honest.”

And the Renault driver admitted the amount of replays that were shown made it tough for him to get back into a frame of mind to go racing again.

“Show it tomorrow, show it in a week’s time, I don’t know, but don’t do it now. Show something else. We’ve all got families, we’ve all got people that care about us and it was violent, it was graphic and it was cold-blooded for them to show it how they did.”

“I wasn’t going to stay inside so I was comfortable enough, yeah.”

The explosion was big enough to capture the attention of all drivers even if they were ahead of the incident, but if anyone missed it then they soon passed nearby again as the track cuts back on itself, and Charles Leclerc admits that only served to increase the concern at the time.

“I saw it in my mirrors, so I saw live,” Leclerc said. “I came straightaway on the radio, I was very worried, if you hear my radio messages. I just wanted to have the good news that Romain was okay, and then arriving in Turn Nine I still had no news, and I saw the fire, so started to worry a lot. 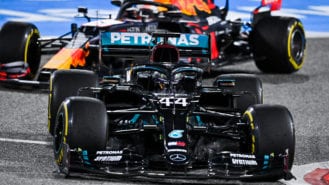 The safety of the cars came in for huge credit – as they should – with the Halo also being praised, as George Russell added: “Unbelievable, had the Halo not been there I am sure it would’ve been an incredibly different outcome.

“The way he walked away anyway was incredible. I have not had an update but I think he is fine from what I understand. Incredible and the safety has moved along so much in recent years so we can only be grateful.”

The work done by the FIA medical team was also something that drew comments from the drivers, who were pleased to see the response to such a horrifying incident. But Sebastian Vettel says the crash also gives Formula 1 plenty to answer.

“I have not looked at the images a lot because I did not really want to,” Vettel said. “But the main thing is that he got out, I don’t know how to be honest.

“Obviously the guardrail is not supposed to fail like that. It is good that the cars are safer than they used to be in the past, but the guardrail should not fail. And the cars should not catch fire in that fashion. There are a lot of precautions that it does not catch fire. So I don’t know what happened there, it is difficult to say at this stage but the main thing is that he got out.”