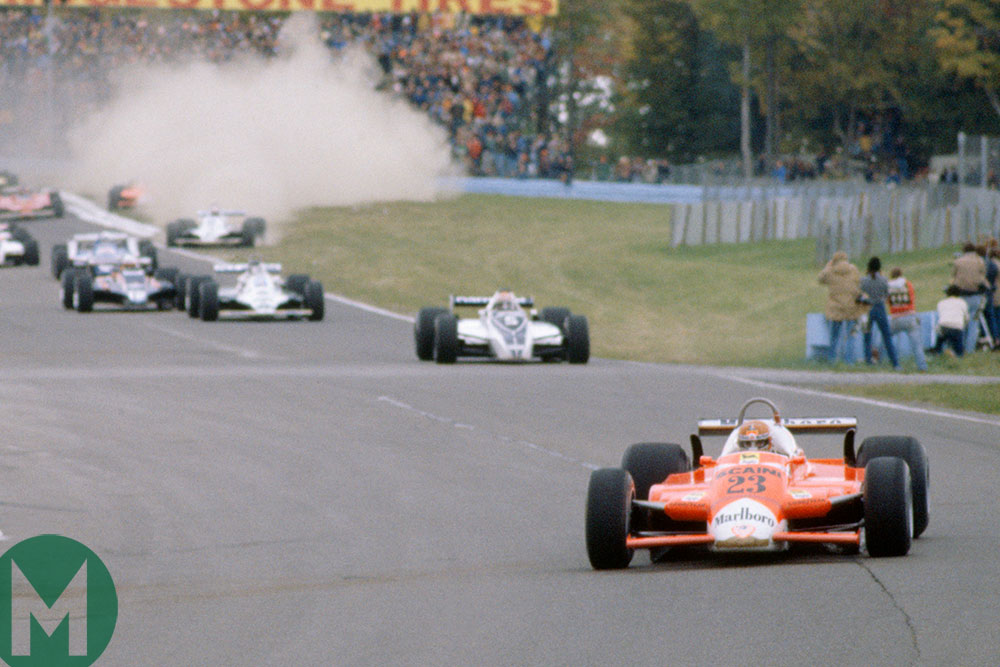 The Sauber name disappears from the grid with the announcement that the Swiss-based team will henceforth be entered as ‘Alfa Romeo Racing’.

The ownership remains unchanged but the multi-year technical and commercial partnership now incorporates this change of name. It’s not the first time the works Alfa Romeo team has been represented by an independently-owned entity: it happened in 1984-85, when Euroracing ran the programme with Benetton-sponsored cars for Riccardo Patrese and Eddie Cheever.

Some time before then, it happened with a recently-established team called Scuderia Ferrari.

Although Alfa’s last participation (1979-85) was but a pale shadow of its glory years when it dominated the late 1940s and the first two years of the world championship in 1950 and ’51 (with updates of its 1937 Alfetta), there was a brief burst of form in 1980. It was a tragic campaign in which Patrick Depailler lost his life testing his Alfa 179 at Hockenheim. That was just how it could be back then. But the performance of the car became ever-more impressive through the season, taking the rest of the paddock somewhat by surprise. At Watkins Glen for the final race Bruno Giacomelli qualified on a dominant pole and led the race going away – until suffering a coil failure.

Conventional wisdom at the start of the 1980 season was that you needed either the grunt of a new-fangled turbo engine to bludgeon your way to the front, or the lightweight, economical and tightly-packaged Cosworth DFV to dance your way there.

The Alfa – with a big, heavy, naturally-aspirated V12 – seemed the worst of both worlds, without the sheer horsepower of the Renault turbo, but much bigger and thirstier than the DFV. Alfa’s racing department, Autodelta, was furthermore new to Formula 1, having just dipped its toe in the water for a selected few races the previous year.

What with the rapid development of new knowledge around sliding-skirted ground effect aerodynamics to keep abreast of as well, Alfa was not rated as a serious force.

But, for the third race of the season, Depailler – still recovering from serious hang-gliding injuries incurred in 1979 – was qualifying the long Marlboro-liveried beast on the second row of the grid at Long Beach. In the race, he was magnificent, running second and fighting with René Arnoux’s Renault and Alan Jones’ Williams before the car gave out.

Watching Depailler brawl with Jones’ much more nimble FW07 was thrilling as well as fascinating. Whereas Jones was able to flick and pitch his car like the precision instrument it was, Depailler was having to man-handle a much more demanding, but very potent, brute. It took longer to turn in and its exit power slides – with that great V12 behind the cockpit – took up a whole lot more track width and lap time.

After a while it became obvious it wasn’t happy running at this pace; its damping was giving up, its arrival at the corners was heralded by ever-louder brake squeals and Depailler began to suffer, with an increasingly long brake pedal. It wasn’t ever going to last, and it didn’t, but it had been a magnificent statement of intent from both Depailler and the team.

Reliability never did match performance, but its improvement curve through the season was one of the most dramatic ever seen. Depailler, the seasoned old hand refusing to accept his days in a top team were over, was a great guiding force in the development of the team, and a big help and encouraging presence to the promising Giacomelli, two down-to-earth guys who’d fought their way through the ranks with no silver spoon head start.

In hindsight, we know why the 179 was such a competitive car. That engine was seriously powerful for its time and came into its own in the new ground effect era. The more heavily loaded a car is through a corner, the more horsepower it needs to grind it through. As aero grip was increasing, so was the optimum crossover point between weight and power. Furthermore, that long V12 ensured that its side venturis were correspondingly long – increasing the ground effect-inducing area.

The big gearbox needed to deal with the torque ensured the rear axle line was quite far-spaced from the engine, giving the airflow through the sidepod venturis a beautifully uncluttered exit. The aerodynamics were conceived and developed by the French SERA concern, led by Robert Choulet. This was the very same group that had developed the previous season’s sensational Ligier JS11s. They clearly knew what they were doing – and at a time when new knowledge had rendered traditional aero thinking elsewhere obsolete.

This time around, of course, Alfa returns to a very much more technically restrictive F1 – and also as an offshoot of a parent company rather than the independent it was back in 1980. So of course, it could not hope to emulate what happened back then, could it?

Except… last year’s (Alfa-sponsored) Sauber – which was arguably the most technically original car on the grid – was the season’s most improved car by a significant margin, beginning the year adrift of Williams at the very back but ending it as occasional ‘Class B’ winner behind the big three.

The team has a fantastic wind tunnel facility, a technical group led by Simone Resta who was a key figure in the creation of the superb 2017 Ferrari – and we have a new set of aero regulations.

We have the experienced old hand Kimi Räikkönen refusing to accept his days at the top are over, set to be a good guiding presence to the team and its promising newcomer Antonio Giovinazzi, who – just like Räikkönen – came through the ranks without a silver spoon headstart.

There are actually a few pieces in place that could yet see a bit of history repeating, don’t you think?