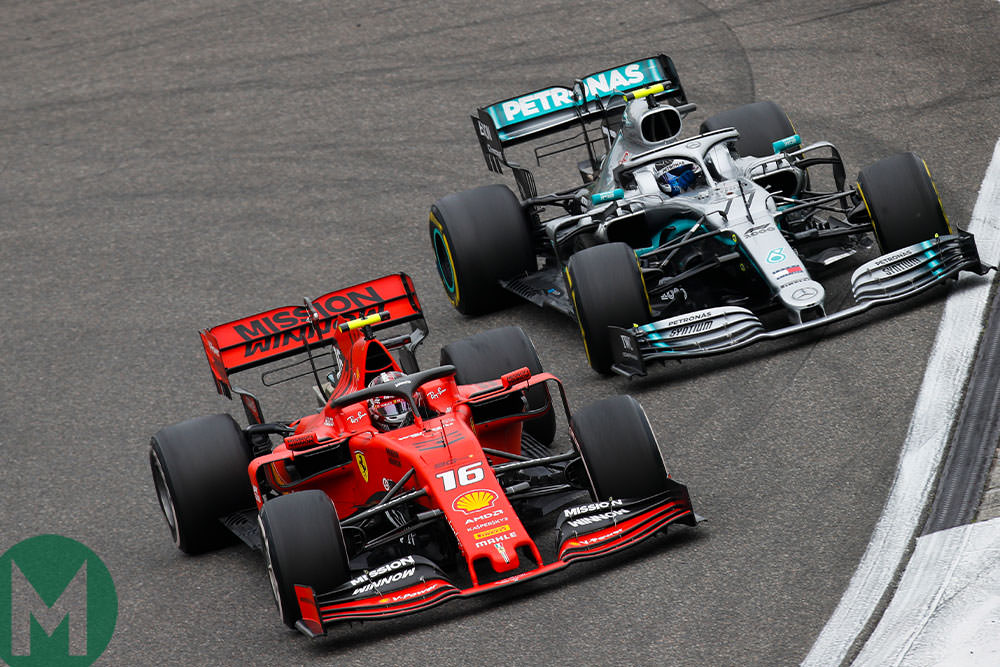 As Lewis Hamilton said after his victorious drive at the 2019 Chinese Grand Prix, having just headed Mercedes’ third 1-2 in three races, “We’re definitely over-delivering a little.” By which, he meant that quick though the Mercedes W10 is, Ferrari has under-delivered relative to its potential.

On the surface, the reasons for that seem obvious. In Melbourne the Ferrari was compromised with an engine issue all weekend, in Bahrain it had been all set to have won comfortably but for Charles Leclerc’s faulty control electronics unit putting him a cylinder down. In China, it was simply out-paced. But look deeper into the patterns of performance and perhaps a clearer picture begins to emerge.

Ferrari’s Australia performance wasn’t only about its compromised power unit – through what is believed to have been rooted in over-cooling of the engine as a consequence of having to powerfully cool the ers after a problem was revealed in the final days of testing. The engineering solution to the problem couldn’t be readied until Bahrain, hence its running without the high-power modes in Melbourne except in Q3 and for the in/out laps of the race.

As we reported at the time, the car was also aerodynamically imbalanced in Melbourne – and this is probably a more significant underlying issue than the engine compromise that was fixed by race two. The car lacked a good front end around the low-grip parkland track. No matter what settings were tried, neither Sebastian Vettel nor Charles Leclerc could take decent speed into the three key slow turns: One, Three and 13.

Then we went to Bahrain and three significant things happened.

1) The Ferrari engine problem was fixed and it was able to use more aggressive modes than had even been seen in qualifying in Melbourne. In the highest of these modes it had a measurable power advantage over Mercedes, GPS revealing it to be powering out of the corners harder and remaining faster all the way down the straight as the ersK kept deploying for longer.

2) Bahrain, being very tough on rear tyres, is a circuit where everyone has to accept a measure of compromise in the set up of their cars. For qualifying they all have much more understeer dialled in than they’d ideally like, just to protect the rear tyres enough to give the required race stint lengths. So if Ferrari was struggling still with a lack of front grip, it didn’t matter – because that’s the trait everyone else had set their cars up for anyway.

3) Bahrain is always one of Mercedes’ weakest tracks. Something in the DNA of its lineage of cars makes them marginally harder on rear tyres than most others. At a track where rear tyres are absolutely the limitation, so Mercedes tends to struggle a little relative to other tracks. To get a handle on how much of Bahrain was Ferrari excelling or Mercedes struggling, let’s take Ferrari out of the equation and compare Mercedes’ gap over the rest of the field in each of the three races.

So given that the Ferrari’s engine was on full song in Bahrain, that its aero imbalance wasn’t relevant there and that Mercedes was struggling, then Ferrari’s pace advantage was decisive. Hence Leclerc’s dominant performance until the late electronic glitch.

But how it’s looking at the moment is that the Bahrain competitive picture is the outlier. Few, if any, of the other tracks are so severely rear tyre limited as Bahrain. At Shanghai – a track that is front-limited to an unusual degree, i.e. the other extreme from Bahrain – the Ferrari’s front grip shortfall from Melbourne had returned. Or rather, its poor front-end grip now mattered much more than at Bahrain – because most others were no longer suffering it as they didn’t have to compromise their qualifying set-ups.

Now let’s look at how Ferrari ran its cars through the China weekend. On Friday morning it back-to-backed a big rear wing and a smaller one. It chose the bigger one. Which sounds counter-intuitive to a car lacking a good a front end. Except – the low downforce rear wing which gave the car a better balance was just way too far out of the car’s aero efficiency range to give a good lap time. It gave a balance only by being down on grip at both ends, but didn’t give enough extra straight-line speed in to overcome that in terms of lap time. So here was Ferrari stretching right into the inefficient part of its aero map – a part where ordinarily it wouldn’t dream of running – just to try to get a balance. The balance came at too much of a cost to lap time. Which probably illustrates the extent of Ferrari’s problem. The Mercedes has significantly more low-speed downforce and can use that to offset its power shortfall.

“We have a very strong car,” said Vettel post-China. “There’s nothing wrong with it but I think we’re not able to yet put it in the window. Especially for myself, here and there. I’m not entirely happy yet compared to where we started off [in Barcelona testing]. Obviously the three tracks we’ve been to now are quite different. The conditions we had are different – but I think we start to see a sort of pattern and understand – especially throughout a grand prix distance – what we need, what I need, to really unlock this car. I think these couple of weeks and the next weeks will be very important for us to understand where we need to go in the next months.”

Does that mean a rethink of the aero philosophy around the front wing, with its tapered outer-ends to promote outwash? This would have major implications upon the rest of the car. Or is it possible to correct the aero imbalance within the existing philosophy? In which case this might all just be an early-season blip rather than a designed-in shortfall. This seems to be what Vettel is hopeful of.

In the meantime we have Baku where, as currently configured, we might expect the Ferrari to be slow through the twisty middle sector but super-quick through the straights of sectors one and three. But the more telling indicator of whether Ferrari has a car with which to make 2019 a proper championship contest will probably come with the round of upgrades in Barcelona. Formula 1 itself must hope that Ferrari can pick up the thread.