Romain Grosjean’s form in his eighth Formula 1 season has been mercurial, which could sink a career that never quite took off as it should 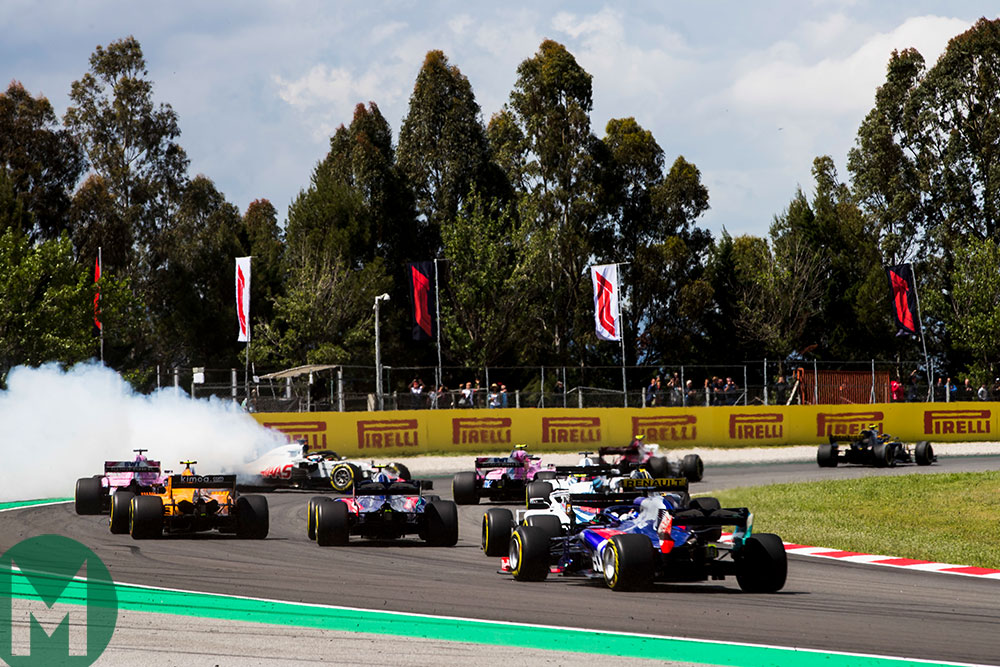 In Austria a couple of weeks ago it had looked as if Romain Grosjean had rescued his future at Haas with a faultless drive to fourth place, having split the Red Bulls in qualifying.

It was a reminder to the team that there was a pay-off for the constant complaints and frequent incidents – a dazzling turn of speed – a vital extra couple of tenths over the more consistent Kevin Magnussen that can sometimes make the difference between a so-so result and a spectacular one.

At Silverstone a week later, he put that drive right back in jeopardy. After destroying a tub in Friday morning practice (by being too late on the DRS-off button as he approached Abbey), he collided with Magnussen on the first lap, inflicting damage on both cars, and later ended his race in the Copse gravel trap after colliding with Carlos Sainz, getting out of shape while defending.

This is no rookie learning the ropes, but a seasoned 32-year-old veteran in his eighth Formula 1 season. His chance of the big time slipped by – his form in the Lotus in the latter half of 2013 was sensational and, with a following wind, might’ve won him three Grands Prix victories against the faster Red Bull of Sebastian Vettel. Had he got into a top car at that point, his career trajectory would have soared.

As it was, he delivered some remarkable drives in a hopeless 2014 Lotus (the team nearing bankruptcy). In Spa 2015, with the bailiffs waiting to impound the car, he took a podium that was about 10 places better than the car deserved. But as the career years ebbed away the frustrations that seemed to creep into his driving.

The brand-new Haas team offered a second chance and there were some fairytale moments, not least that great sixth-place at the team’s debut race. But it’s a tiny team, running on a very different model to the others, without the engineering depth of a works team – and Grosjean has frequently needed more help than is available in making his aggressive corner entry style work. He spent two seasons battling a brake-by-wire system that didn’t allow him to drive in his natural way, for example. He’s not a driver that can readily adapt to car limitations, and his reaction when it’s not happening for him can be trying as all that frustration bubbles up.

you could see the ‘what do I do with this guy?’ exasperation upon team boss Günther Steiner’s face

This year has seen the best and worst of him.

In Baku, the car’s hydraulics failed before he’d even began qualifying. Starting at the back, he steadily weaved his way through the pack around this trickiest of tracks until he was right behind Sergio Pérez (who would go on to finish third) in the safety car queue. Unbelievably, Grosjean put it in the wall while the race was still under the safety car. He’d inadvertently knocked the brake bias full rear as he was weaving, warming his tyres. Then as he weaved and braked simultaneously, the rears instantly locked and spun him out. This could so easily have been a magical third-place from the back row of the grid.

In the opening seconds of the Spanish Grand Prix, he spun – ironically in trying to avoid hitting out-of-shape team-mate Magnussen – but rather than allowing the car to loop to the outside, he attempted to powerslide a 360. Without sufficient momentum, he instead put himself broadside across the pack and was collected heavily.

In Canada, his engine blew itself up just as he was driving down the pitlane to begin qualifying. Up to that point, he’d invariably been the fastest of the ‘division 2’ runners behind the top three teams. Again starting from the back, he was up with team-mate Magnussen – who’d started half the grid ahead of him – by the fourth lap. He then eked out a superb combination of tyre preservation and pace to beat his team-mate.

In Austria, everything came together for a clean weekend and he delivered, always fastest of division two, always with a couple of tenths over his team-mate, fast enough to out-qualify a struggling Red Bull and securing a great fourth-place in the race. Was this the foundation upon which he could rebuild, and bring some much-needed serenity back into his campaign? Silverstone answered that one emphatically and you could see the ‘what do I do with this guy?’ exasperation upon team boss Günther Steiner’s face. Grosjean can be so good. But for a driver of his experience, he’s already running heavily in the red in drawing upon that goodwill.

For some years it’s been apparent that Grosjean had lost the chance of the stellar F1 career that might’ve been. But unless he can turn things around in the remainder of this season, he’s staring at the end of any F1 career at all.