This was a tyre deg race. Yet it was also a Lewis Hamilton virtuoso performance. That may sound contradictory. But there are sometimes days when a great driver can deliver something beyond the ordinary, when a compliant set of circumstances allows him to catch the frequency of perfection and tune into it. Sunday was one such day for Hamilton, winning untroubled from the Red Bull of Max Verstappen who recognised before anyone else that he was fighting only for second, his victory of a week ago and the super-high temperatures of Barcelona in August having raised Red Bull’s (and F1’s) hopes. Falsely.

“We are managing the pace, multiple seconds behind what we could be doing,” Hamilton explained. “Because the tyres are not good enough.” But in his managing of his resources, the timing of his letting rip with the pace after the tyres had worn down enough, his judgement of how close he could nudge towards the limit without damaging the rubber, he was perfect.

Off the back of events at the two Silverstone races, Mercedes arrived here uncertain if the combination of a Spanish August and the long-duration turns would again trigger some sort of variation of the W11 being more troubled by the tyres than RB16. Friday practice established that the blistering that had ruined their races last week wasn’t an issue. But it also suggested that the Red Bull was equally as fast over 10 laps, regardless of it being the thick end of a second adrift over a single low-fuel lap. Ten laps were about all there was time to do, among all the other tasks that must be performed during Friday running, but it wasn’t enough to properly know how those cars would compare over a longer, more representative, race stint. Because around this circuit on these tyres the limit isn’t how fast the cars can be driven, but what the optimum trade-off is between lap time and tyre life, when that pace is whole seconds off. So, what would happen beyond 10 laps?

Helped by Valtteri Bottas’ poor start, Verstappen had vaulted straight up to second. For the first 10 laps of the race he sat just out of the tyre-damaging turbulence zone of Hamilton’s car.

Everyone else was doing the same, initially lapping around 9-10sec off a qualifying pace. Around 5.5sec of that is the fuel weight, maybe 1.5sec for much tamer engine modes, 1sec for tyre age. The missing 1-2sec is the drivers keeping the tyre away from thermal degradation where the tyre’s core overheats, becomes too flexible and no longer adequately supports the tread. Get it to that point and the tyre can be 3sec or more off the pace even with barely any of the tread used up. So drivers are being guided, advised of their tyre temperatures and driving accordingly.

It’s not proper racing, is it? But there’s still a great skill in how much pace can be conjured while keeping below that tyre temperature threshold. As the tread wears down, the rubber retains less heat and the problem reduces. So the first 10 laps were just about stabilising the rubber while maintaining track position. 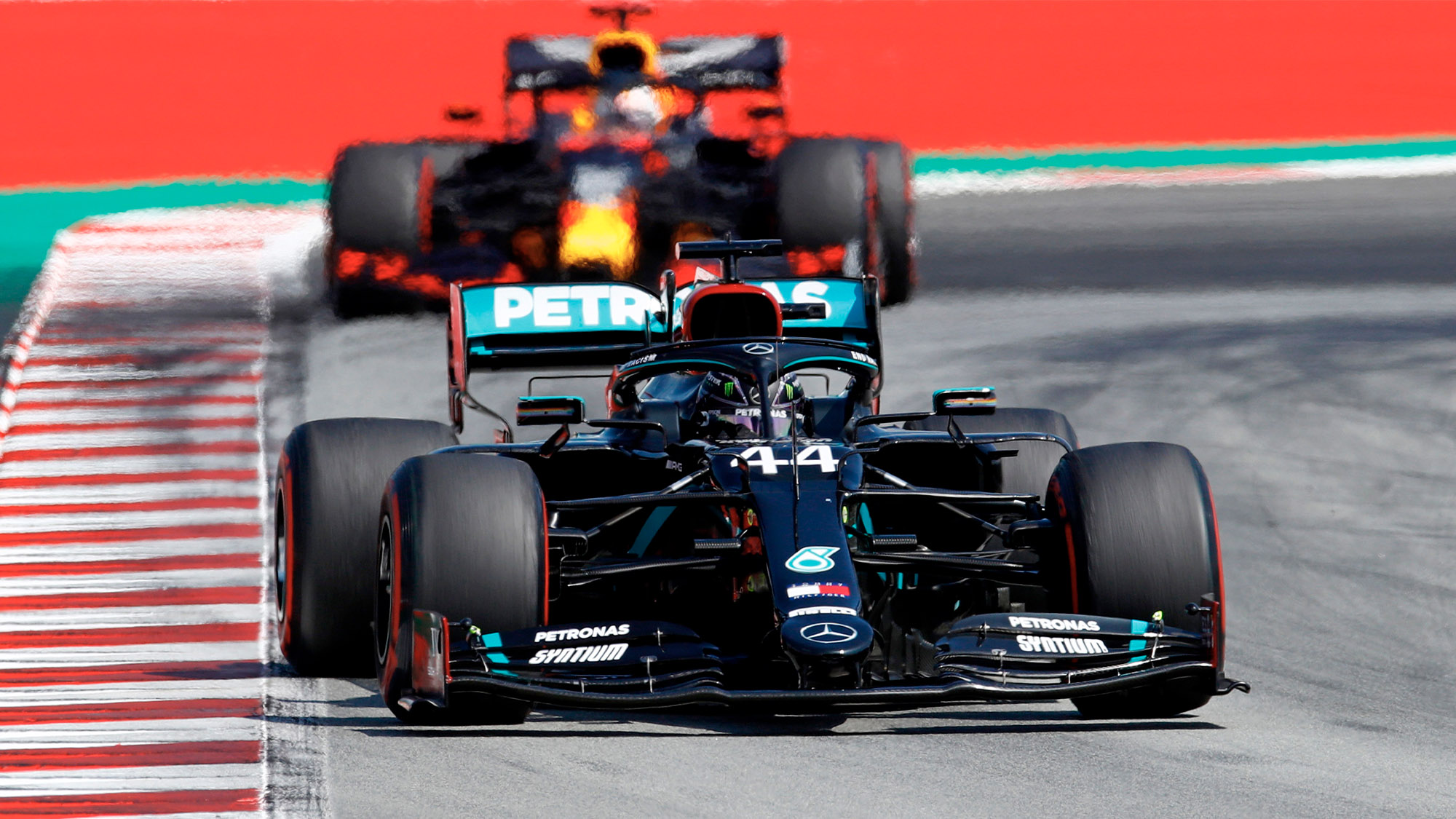 The invisible wall: Verstappen could get no closer to Hamilton

On lap 10, Hamilton stepped up the pace by 1sec. Then 1.5sec. Then by 1.7sec. Now he was driving the Merc somewhere close to the limit, the tyres remained just the right side of their threshold – and the Red Bull was left gasping. “As soon as he did that,” related Verstappen. “I thought, ok, that’s me done for the day.’” Which was not defeatist, but just recognition of a hard physical reality. If he pushed harder, the tyres went past the threshold.

Verstappen’s day was then just about a rear-guard action in fending off Bottas’ faster car. Which he succeeded in doing. You need to be 1.5sec faster than the car in front around here just to get into the DRS and if you still cannot pass, then you’ve damaged the tyres for nothing. Delayed by spending the first four laps behind Lance Stroll’s Racing Point, Bottas could only nudge gradually up to Verstappen in that first stint (tyre temp threshold, remember). As soon as he got somewhere close, Red Bull brought Verstappen in. That bought him a couple of laps of new tyre time before Bottas pitted. Red Bull’s faster stop gained him another 1.2sec. So Bottas was now starting his middle stint 4sec behind, but with that same tyre game of only being able to drive to the temperatures, so only slowly pulling the Red Bull in. Verstappen was doing a brilliant job here, and the fact that he was now trailing so far behind Hamilton, out of the turbulence zone, meant he could be easier on the tyres than Bottas. But even when Bottas did eventually get close, he could do nothing. “Every year, with more and more downforce it gets more and more difficult to follow,” he lamented later. “That’s how it is. So, that’s why if you lose position at the start it costs a lot.” 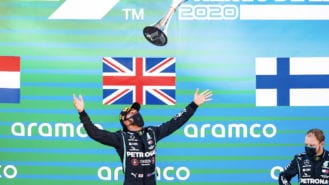 Another record down for Lewis Hamilton, as he wins the 2020 Spanish Grand Prix in a zone of his own

That was it, the story of the race between the three fastest cars. Verstappen banked his track position advantage over Bottas by making his second stop early. Mercedes tried to give Bottas a tyre offset to give him the spec advantage that might allow him to overtake by leaving him out seven laps longer and fitting him with a set of softs. It was worth a try – and netted Bottas fastest lap – but didn’t offer him an escape from the performance matrix trap he’d put himself in with that start. “The soft was a good idea but in the end the soft just wasn’t quite good enough; you can’t really push that tyre. It just overheats.”

Far behind the fastest trio, the Racing Points were best of the rest, one-stopping Sergio Perez beating two-stopping Stroll on the road but finishing behind him in the official results after a 5sec blue flag penalty was applied. That’s right, the guy in fourth was lapped. The Racing Points were being reeled in at the end by the McLaren of a starring Carlos Sainz but that probably meant less than it looked. After all, he wasn’t going to overtake was he? Sebastian Vettel salvaged a seventh place for Ferrari by one-stopping. Alex Albon, eighth in the Red Bull after a snowballing series of problems, was perhaps the only man more dejected than Bottas afterwards.

Hamilton meanwhile was buzzing from a special zone he felt he’d accessed. He’d balanced perfectly on the point of going slowly faster than anyone else. 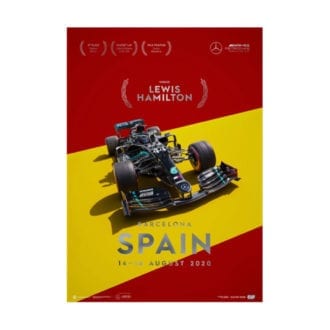