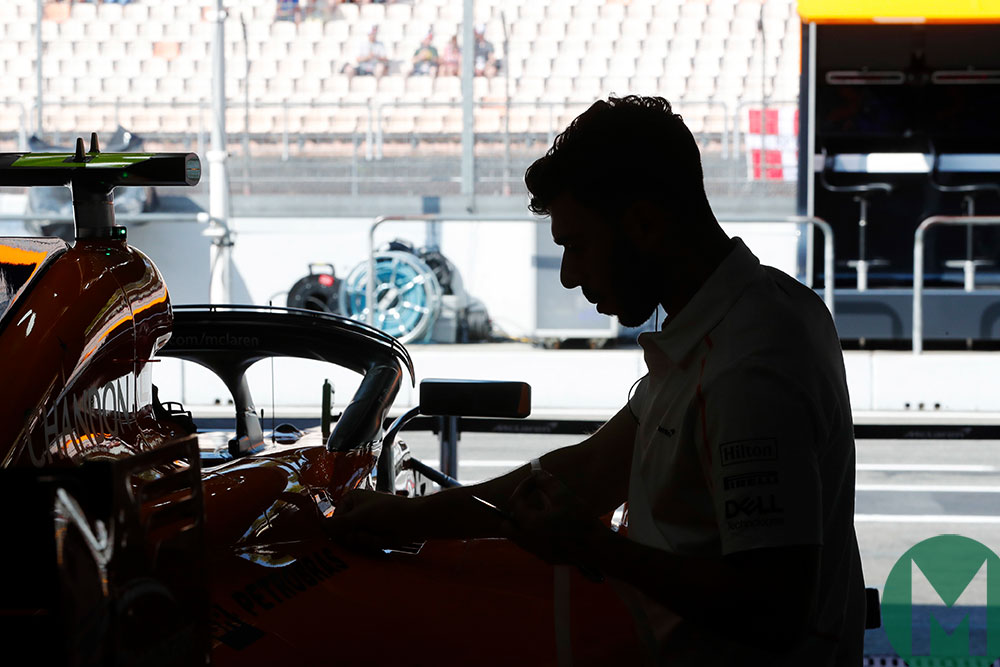 This time last year there was a degree of excitement (even giddiness) at the new McLaren-Renault. Much of that was in anticipation of its form, now that it had bought its way out of the Honda contract.

Engine parity with Red Bull left nowhere to hide, and no one was shirking from that comparison.

The reality was soon revealed as rather bleaker and a horrifically stormy time ensued with a car that began in the midfield and ended at the back. A very serious internal re-assessment was made amid the shock of discovering how far from a front-running entity McLaren had become.

The McLaren team that considers its prospects 12 months on is very different in both shape and attitude. Many of those who headed gung-ho into those stormy seas a year ago, at a very senior level, are no longer with the team. They have not all definitively been replaced, and Zak Brown is in the position of rebuilding a squad with what is available while various gardening leaves play out elsewhere.

At least as important as the personnel is the environment. In looking at the factors that will define the success or otherwise of McLaren’s turnaround in 2019, the working environment is one of three crucial ones, alongside aerodynamics and engine performance.

In hindsight… we had embedded some aero issues in the car, creating a bottleneck, making development of the car very difficult.

Subsequent evaluation of last year’s situation revealed a damaging culture of departmental silos had built up at senior technical levels and the three-pronged technical committee had simply not worked. The shortfall in engine performance from Honda had allowed this to go longer undiagnosed than would otherwise have been the case, developing and festering for several years. Engine parity with Red Bull together with the specific aerodynamic challenges of the widebody generation of cars starkly revealed it.

As a result of simulation that proved inadequate for the huge aero complexity of this generation of car, a fundamental aerodynamic limitation had inadvertently been built into the MCL33. A healthier, more open collaboration between the technical departments may have made this limitation evident before it had got to the point of defining the car.

So Brown has brought the silo walls down and in Simon Roberts, Andrea Stella and a returning Pat Fry, he has reconfigured the technical team, with chief technical officer Peter Prodromou the only one of the original technical trio still in place.

It awaits James Key’s gardening leave from Toro Rosso to play out, but in the meantime McLaren has attacked the task of building the 2019 car in what Brown describes as ”a good environment”.

He explains: “There is a lot of cautious optimism because we clearly don’t want to get ahead of ourselves – because we have done that before and we are not going to make the same mistakes twice – so it is a very heads-down attitude.

“Development is going well, we are on track with what we are wanting to achieve [internally]. Ultimately obviously we have no idea where the competition is… [But] we are pleased with the progress we have made; we have done things differently, everyone is working well together so it feels like a [quieter] confidence.

“But we are on our toes – we know this is an important year for us to show progress.”

Brown acknowledges that further investment has been needed in the upgrade of certain technical equipment. At least as important regard to the simulation capabilities, is that the tech guys believe they have a much better grasp on the nature of the problem and how to get around it.

In Abu Dhabi, performance director Stella gave some insight into that: “The car carried high drag but not because the body was fundamentally draggy. It was because it was not maintaining the downforce to the rear through the corners, so we were having to run a bigger rear wing to compensate.

“This generation of car has made it very difficult to maintain downforce through the corner. Most of what the aerodynamicist has to deal with is the wake of the front tyres and the 2017 change made that wake even bigger.

“Our ‘17 car was a good baseline car and we thought [with the ‘18 car] we were not changing very much but we tried to expand and consolidate some concepts of that car into this one. In hindsight, after lots of methodical investigation, we had embedded some aero issues in the car, creating a bottleneck, making development of the car very difficult.

“The fundamental capacity to keep delivering downforce through the corners had gone beyond our calculation.”

“Because you are pushing boundaries of what tunnels and CFD can do,” says chief operating officer Simon Roberts, “we have had to measure more stuff at the track, instrument the cars up on a race weekend, particularly on Friday, and that’s a whole science in itself, one which must work in parallel with the tunnel.

“So part of our re-evaluation has been: have we used the right tools and techniques in the R&D side of it?

“We’ve left no stone unturned. If you miss the one thing that’s having you over, then the car is flawed.”

There’s reason to believe, then, that the aero part of the equation could make a step forward within the new environment. In looking at the 2019 prospects, that still leaves a matter out of McLaren’s control: Renault.

“They are telling us that they are very pleased with their winter progress,” says Brown on Renault’s involvement.

“That they have found a lot of kilowatts, and think they will be in the ballpark. It is not appropriate for me to quote the numbers they have given us, but I think they feel they are going to be very competitive next year.”

The car must have a better than average chance of being more competitive than this year’s, surely. Good enough to tempt Fernando Alonso back in 2020?