“We dodged some bullets there,” said a relieved Valtteri Bottas after climbing out of his Mercedes the victor of the opening round of the 2020 world championship, a thrilling and incident-packed race that belied the substantial raw pace advantage of the Mercedes W11. An official second place for Charles Leclerc’s Ferrari (after a 5sec penalty was applied to Lewis Hamilton for a collision with Alex Albon – again) was a major over-achievement, a brilliant drive in a mediocre car. Lando Norris also punched way above his weight in both qualifying and race to take the third podium place.

There were indeed, though, so many bullets Bottas had to dodge in taking this victory. Here they are.

Bottas’ pole lap was his first Q3 attempt. He didn’t complete his second. Running without the benefit of a tow (it was Hamilton’s turn this weekend) he was pushing super-hard, knowing he was fighting the likely couple of tenths of slipstream advantage he was providing his team mate. He took huge momentum into Turn Four and released the car from the brakes early, just a little too early – running him out of road on the exit and getting onto the grass. At this point the yellows (lights) came on in the expectation of Bottas rejoining the track – but actually he stayed over on the grass and the lights were almost immediately extinguished. But not before Hamilton had passed one of them at full racing speed on his own qualifying lap. It was dusty and there was a green flag further on, lending further ambiguity. But footage presented by Red Bull just over an hour before the race proved that Hamilton had technically committed the offence – and he was duly penalised three places. So by spinning, Bottas had inadvertently inflicted a serious blow to his likely biggest threat. Hamilton’s lap had trailed Bottas’ by 0.012sec. But the ‘Black Arrows’ were a full 0.5sec clear of the field.

But Hamilton’s demotion boosted the chances of the other bullet likely to be fired at Bottas – a medium-tyred Red Bull driven by Max Verstappen.

The footage that led to Hamilton’s penalty

The stewards cleared @LewisHamilton of any wrongdoing following this yellow flags incident at the end of qualifying on Saturday 👀#AustrianGP 🇦🇹 #F1 pic.twitter.com/Vx9ziJtuU3

The Red Bull RB16-Honda looked an oversteering handful on Friday when both Verstappen and Albon had spun, just as in Barcelona testing. It was much better from Saturday onwards – but still a full 0.5sec adrift of pole, not significantly faster than a McLaren, Racing Point or Renault (but comfortably faster than Ferrari).

But that was just about fast enough for Verstappen to get through Q2 on the slower medium tyre, thereby allowing him to start the race on it. More durable the softs used by the rest in Q2, it just might have enabled Verstappen to have hung onto Bottas for the first stint, then run longer – so as to get onto the soft for a short final stint, in which he might have been able to chase down and catch Mercedes, in just the way he did Charles Leclerc last year.

But it wasn’t to be. He’d got away second and was indeed able to peg the gap to Bottas to around 3sec for the first 10 laps of the race. The strategy appeared to be shaping up nicely, but the engine went south very suddenly a lap later. He was out.

Ferrari wouldn’t be firing any bullets Bottas’ way, incidentally. The SF1000 was revealed to be 1sec off the pace, Leclerc qualifying it only seventh and Sebastian Vettel failing to make it into Q3. It appeared to be seriously down on power, was 11km/h slower than it predecessor through the traps  – and its deficit in the ‘power sector’ of S1 was twice that of the more flowing sector two. In-car footage comparison showed it was actually faster than last year’s car through the turns but over 0.9sec slower over the lap. It went from fastest on the straights in 2019 to 19th and 20th this year…   It’s little draggy, perhaps. The aero upgrade comes in Hungary. The power upgrade is perhaps more urgent.

Leclerc drove a quite brilliant race, initially sitting in the ‘Class B’ pack with the McLarens and Sergio Perez’s ‘pink Mercedes’ Racing Point, unable to pass due to the lack of straightline speed – but then launching a series of late braking attacks in the late stages to take himself to the head of that pack. With some late safety car help, that was enough to get him within less than the 5sec by which Hamilton was penalised. 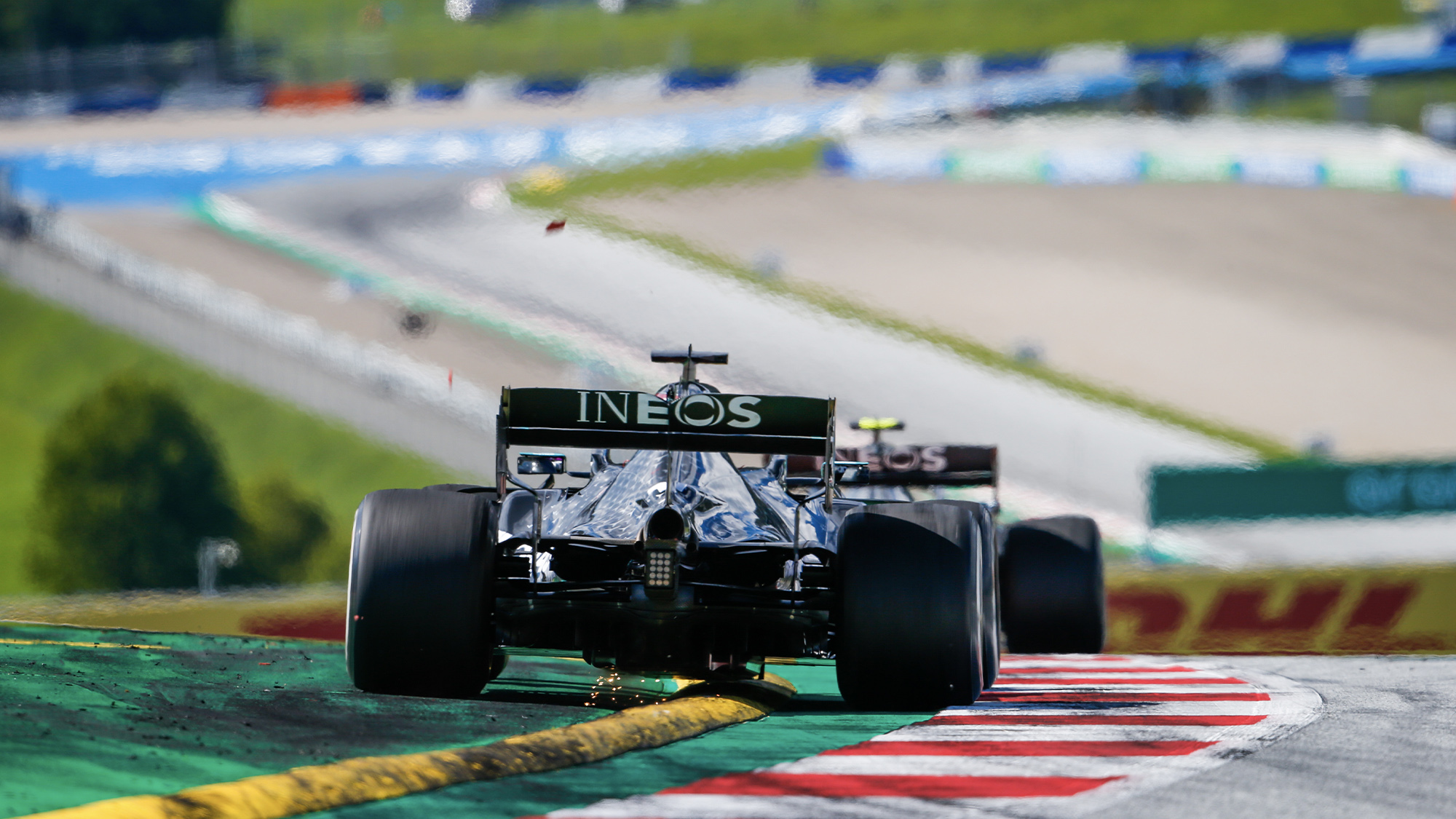 Another bullet for Bottas to dodge was a sensor which threatened to put the gearbox into failsafe mode – which would have meant no gears. This was an issue on both cars throughout the weekend and was exacerbated by the severe vibrations the kerbs of this track impose. It was apparent from lap one on Bottas’ car – and a few laps later on Hamilton’s. But it was always more critical on Bottas’. The likelihood of it lasting the race was deemed low. Both drivers were being constantly admonished for using the kerbing – which you need to do to be quick here. And Hamilton wasn’t letting Bottas off the hook, once he’d benefitted from Verstappen’s retirement to get up to second.

Hamilton began closing Bottas down as soon as Verstappen retired. He’d had to find his way past Albon and Norris in the opening couple of laps and so was 8sec adrift by lap 10. But he had this down to 3.8sec – and was sniffing opportunity.

Bottas reckoned he was just managing the tyres, ensuring he did a good stint length, so as to keep Hamilton from running way longer and getting onto newer tyres with which to attack him near the end. That indeed was Hamilton’s game plan. After closing Bottas down he intended to run as long as possible after Bottas had been called in – and then try to go long enough to go onto the medium tyre (on the assumption the earlier-stopping Bottas would’ve changed onto the hards in the pits).

But it didn’t happen like that. Kevin Magnussen’s brakeless Haas caused a safety car – and Merc brought both drivers in. Hamilton didn’t get to try his offset tyre strategy, as they were both put onto hards to do the remaining 45 laps.

Hamilton of course came back at Bottas, and for a time they were trading fastest laps, with Hamilton rarely out of Bottas’ DRS zone. They dropped Albon at a rapid rate. That battle was ultimately called off at the urgent request of the team, trying to protect those critical gearbox sensors.

The final bullet Bottas was able to dodge thanks to the help of Hamilton. A late safety car came just as the Mercs had passed the pit entry – allowing Albon, the McLarens and Leclerc the opportunity of fresh tyres and having their previous deficits wiped.

This made Albon a potential major threat. The Red Bull may have been intrinsically 0.5sec slower than the Merc. But a Red Bull on fresh softs against two Mercs on 34-lap-old hards, was going to be substantially faster, maybe 1sec per lap faster. Especially at the restart as the old rubber would take longer to come up to temperature.

MPH: The case for Valtteri Bottas as 2020 F1 world champion

With an F1 calendar of sorts beginning to evolve, and the scheduled beginning of the season little more than a couple of weeks away, focus is finally coming back to…

That was the backdrop to young Albon – with a potential grand prix victory on the table, right in front of him – launching an immediate attack on Hamilton, going around his outside at Turn Four. It was a brave, committed move but it relied on the co-operation of Hamilton to make it work and Hamilton wasn’t obliged to give it. It was a racing incident as left-front Mercedes bumped right-rear Red Bull and spun Albon into the gravel. “I thought I’d already got the move done,” said Albon, “and I was already looking at Valtteri up ahead, when I felt the bump.” Hamilton was given a 5sec penalty.

Norris couldn’t hold back Leclerc but emerged on top of a tight scrap with team mate Carlos Sainz and Perez. Going into the last lap it looked like he wouldn’t be quite within 5sec of Hamilton. But a remarkable effort not only netted him fastest lap of the race, but also third place. He’d over-achieved in qualifying by putting the MCL35 fourth on the grid. Now here he was on the podium, a fantastic result for the team after its recent travails.

It was only as the race ended that it didn’t feel just like an old-style event, pre-covid. But as Bottas, Leclerc and Norris stood on their makeshift little platforms, socially distant, in front of empty grandstands, the new normal returned. It was a poignant little reminder of just what an immense achievement F1 has pulled off here. It’s dodging a few bullets of its own.