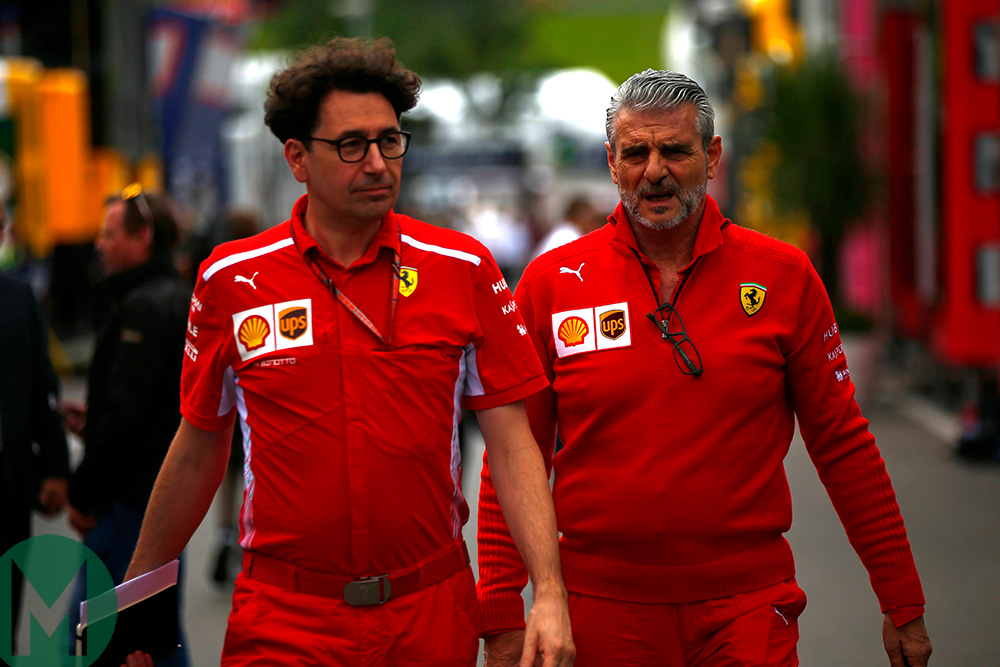 That Charles Leclerc set the fastest time of Abu Dhabi postseason testing was perhaps symbolic. He eclipsed the lap set by Sebastian Vettel in the same Ferrari on the previous day.

In terms of an actual measure of comparison between Vettel and Leclerc, it will likely mean nothing: the times were set on different tyres (the new ‘Compound 5’ for Leclerc, the 2018 hypersoft for Vettel), different days, probably different set-ups, and probably even a different commitment to setting the ultimate time. But it neatly frames the intra-team challenge that Vettel will face next year on the back of a season in which even he admits he has not performed at his best.

The double whammy of Leclerc’s rookie pace at Sauber and Vettel’s error-strewn season at Ferrari this year has already got many observers convinced that the 21-year-old Monégasque driver is going to out-perform the quadruple champion in 2019 and contend for the title.

But Vettel is probably not even the biggest challenge facing Leclerc. He will be learning all about Ferrari, as it’s in the midst of a continuing internal power struggle.

Possibly playing to Leclerc’s advantage is that the relationship between Vettel and the team has not been great this year, despite what propaganda the team boss Maurizio Arrivabene issues out.

Arrivabene has also said that interest from other teams in technical director Mattia Binotto is “fake news”. It is not. There is one very firm offer on the table and another, ‘we’d be very interested in having a talk with you,’ opening for the man credited with turning Ferrari into the most technically creative team of the last two seasons.

In their combined litany of errors this year, Ferrari and Vettel seem to have damaged their relationship

The possibility of having Binotto serving gardening leave next season – and then working against Ferrari beyond that – is a worrying one for the Scuderia and could form the biggest barrier of all to Leclerc’s prospects.

The background to it all, of course, is tied up in the sudden death of Sergio Marchionne in July.

It’s widely believed the late president had planned to replace Arrivabene as team principal with Binotto. Which, of course, defines the current working relationship between the two men as awkward.

The management above Arrivabene cannot, in all responsibility, ignore the possibility of Binotto flying the nest. Could Binotto be satisfied with continuing indefinitely in his current role when there are genuine offers that would allow him to develop his career and reputation? Does Arrivabene have the personal skills to convince Binotto that they are stronger together than apart? Does he possess the vision to take the team forward? These are not questions Louis Camilleri, John Elkann or Piero Ferrari can shirk from.

Only if those questions are resolved can Leclerc concentrate on Vettel being his biggest challenge. The new guy probably has around the first half of the season to establish himself as ‘the man’ in the team, the one to whom they automatically look to squeeze the crucial few hundredths for pole position.

Against a driver as outright fast as Vettel, that will be a huge achievement. Much will depend on the traits of the car, but Vettel’s way of suddenly pivoting the car into a slow corner contrasts with Leclerc’s more classical style.

If Vettel has a car with the strong rear end that allows him the more abrupt direction change without developing into a time-consuming slide, he continues to be dynamite.

This is Vettel’s biggest differentiator over the rest and the skill that allowed him to exploit exhaust-blown diffuser cars better than anyone. It continues to be valuable today, but for different reasons. The rear Pirellis are highly prone to overheating. A smaller initial but more sudden peak load (such as Vettel’s style imposes) generates less heat than a longer sustained but lower peak load (such as generated by the more classical style).

They are just the physical aspects. How a driver works with the team, what energy he generates around him, how people respond to him; this is where the magic is that differentiates the good from the great. But that requires a team that buys into him. This is where Vettel could come unstuck.

In their combined litany of errors this year, Ferrari and Vettel seem to have damaged their relationship and lost trust in each other. Which has only fed on itself and contributed further to those errors. That’s a tough cycle to break out of – especially in a politically-charged environment.

These are the separate but interlinked challenges faced by Leclerc, Ferrari and Vettel into 2019.