Formula 1 has been dominated by Mercedes since 2014 – can Ferrari, Red Bull or the rules end that? 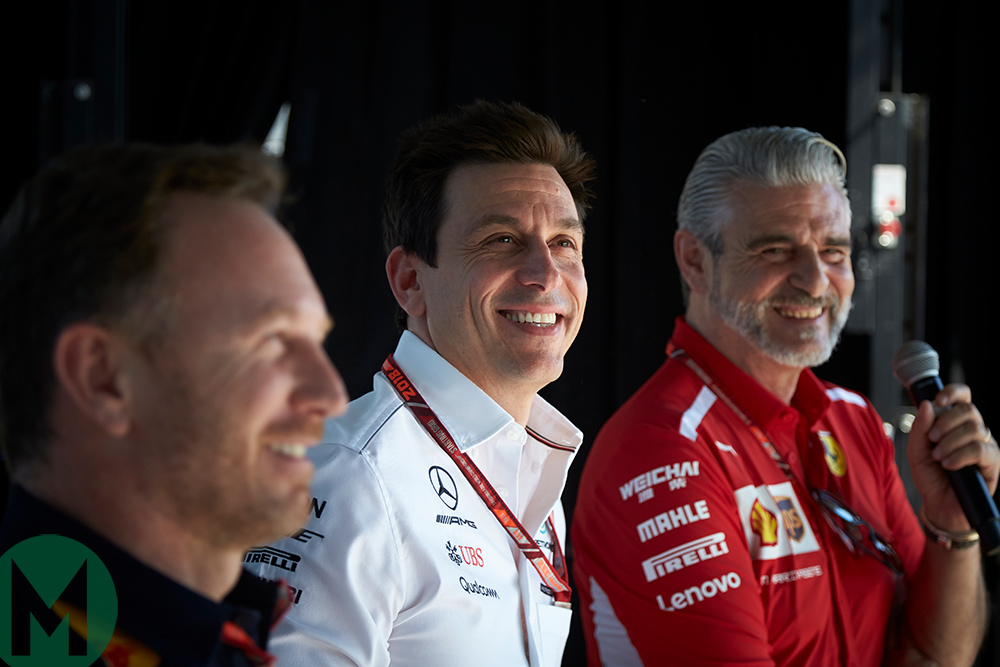 For the sake of argument, let’s state that the current formula was introduced with the hybrids in 2014 and that it runs until the end of 2020. Although we’ve had significant changes during that time – bigger and wider-tyred cars from 2017 and further aero revisions for 2019 – the big change comes in 2021 with radically redrawn cars.

So we will have had seven years of this formula.

Can Mercedes go on to win every single one of those championships? There are only two seasons left for a team to stop it doing that and, in the process, achieving the longest run of title success of any team in the sport’s history (currently Ferrari, constructors champions 1999-2004).

What feasible obstructions are there to Mercedes’ domination continuing for the remaining two seasons?

After two consecutive seasons in which Maranello’s strong title challenge has suffered a late-season implosion, Ferrari may seem too brittle a prospect to deny the Mercedes steamroller in the remaining time. But the creativity of the technical department remains at the core of this team’s strength.

On the engine side, over the last two seasons it has come from behind, drawn level and even eked out a small advantage over a mighty Mercedes power unit that has been developed at a prodigious rate. It has done so with unique solutions such as the twin battery layout which contains within its workings an incredibly clever way of meeting the regulations but conferring an advantage. The FIA understands how it works and is happy that it fully complies.

That sort of ingenuity has been much in evidence on the chassis side too, with last year’s SF70H introducing a whole new concept of sidepod/crash structure integration that brought a significant aerodynamic advantage. It has become the norm that Ferrari is the team most frequently triggering new technical directives as it finds ingenious ways of getting around the intent of regulations without quite breaking them (see last year’s mid-season floor tweaks and active blown axle).

But even more impressively, it invariably bounces back to full competitiveness even after having its wings clipped. Late this season (Singapore onwards) the development direction seemed to have taken a wrong turn, but the hope is that the root cause of this can be quickly understood.

Mattia Binotto has turned out to be a great technical director and we’re hearing that they are very excited at Maranello about the initial simulated performance of the 2019 car. It would be no surprise if there were not some highly original solutions to the demands of the new 2019 aero regs.

But can the team be kept together? Rumours persist that Binotto has been offered places elsewhere (Mercedes and Renault) and his relationship with team principal Maurizio Arrivabene naturally has strains thrust upon it, given how their respective career trajectories were changed fundamentally by the death of Sergio Marchionne.

Then there’s the relationship between the team and Sebastian Vettel. The driver has never been publicly critical of the team and its often-flaky operational side, but there is a definite sense of each having lost faith in each other. Place into that environment the potentially explosive situation of a new young driver challenging the in-team status quo.

All things considered, that’s a big challenge to manage. Especially when you are up against perhaps the best-managed team in the pitlane.

“You’ve seen this weekend,” said Christian Horner in Mexico, “if we have an engine that’s anywhere near the ballpark of our opponents, then we’ve got a strong enough team and strong enough driver package to take the fight to them.

“We’re obviously hopeful that the Honda, with the progress they’re making, will put us into the situation that we’re more regularly able to compete like we are here – with the optimum downforce and setting on the car.”

Honda a world title challenger? It’s not as crazy as it may initially sound. The progress made of late has been impressive. After years of trailing Renault in the power stakes, an aggressive development programme, accepting multiple engine penalties in order to accelerate the learning process, the current ‘Spec 3’ Honda is said to be 60bhp up on Renault. That’s still short of Ferrari and Mercedes, and it’s a little overweight, but it indicates that the learning curve has started headed strongly north at last.

Red Bull habitually turns out an aerodynamically superb car, Honda essentially does not have a budget and is throwing everything at making this partnership the rescue of its hitherto embarrassing hybrid Formula 1 programme.

Red Bull remains super-slick operationally, with a beautifully simple and harmonious structure – and is led by the one driver who looks set to be able to challenge Lewis Hamilton on equal terms in the years ahead.

Imagine how the F1 landscape would change with, say, three straight Red Bull-Honda wins at the start of the new season… Fantasy? Stranger things have happened. The extraordinary becomes accepted normality very quickly in F1. When things turn, they can do so very suddenly.

The new regulations revolve around an entirely new, much simpler, front wing. There’s more to the rules than just that, but that is the crucial point that is set to completely alter the whole aerodynamic philosophy of the cars.

For the last decade, aerodynamicists have sought to direct the air primarily around the outside of the front tyre and to work the outer body hard. With this wing, it would seem the main endeavour will be to direct as much as possible inboard of the tyre, giving an even greater prominence to the underfloor.

Essentially, the development paths followed by each of the major teams since 2014 will be rendered obsolete. Such resets are usually the time a new competitive order establishes itself.