A confidential settlement has been agreed between Ferrari and F1’s governing body, the FIA, after an investigation into the team’s engine.

Rivals had raised suspicions over the legality of last season’s Ferrari engine, which had a significant power advantage over the rest of the grid.

Now, after “thorough technical investigations”, the FIA has announced an agreement, which will involve Ferrari assisting officials on research into greener engine technologies.

Ferrari has always maintained that its engine was legal. This has not been contradicted, or supported, by the settlement — the details of which are being kept secret.

“The FIA announces that, after thorough technical investigations, it has concluded its analysis of the operation of the Scuderia Ferrari Formula 1 Power Unit and reached a settlement with the team,” the announcement said. “The specifics of the agreement will remain between the parties.

“The FIA and Scuderia Ferrari have agreed to a number of technical commitments that will improve the monitoring of all Formula 1 power units for forthcoming championship seasons as well as assist the FIA in other regulatory duties in Formula 1 and in its research activities on carbon emissions and sustainable fuels.” 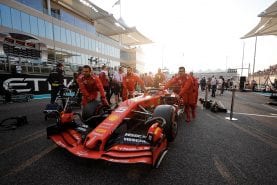 MPH: Why rivals are suspicious of Ferrari's fuel 'error' — behind the controversy

So, what was Ferrari’s fuel declaration controversy in Abu Dhabi all about? An hour before the race, the FIA issued a statement that it was investigating the difference in Ferrari’s…

Since 2018, teams have been raising questions about Ferrari’s power unit, looking for FIA clarifications on whether it could be in breach of the rules in its use of a twin battery; by burning excessive oil; or by interfering with the standard fuel flow meter.

Suspicions intensified when Charles Leclerc’s car was checked before the end-of-season Abu Dhabi Grand Prix, and found to have 4.88kg more fuel than the team had declared. Ferrari incurred a €50,000 fine.

The settlement immediately drew speculation over what prompted Ferrari to make its additional commitments to the FIA.

This year’s engine does not have an obvious power advantage over the rest of the field, based on the results of six days of testing.