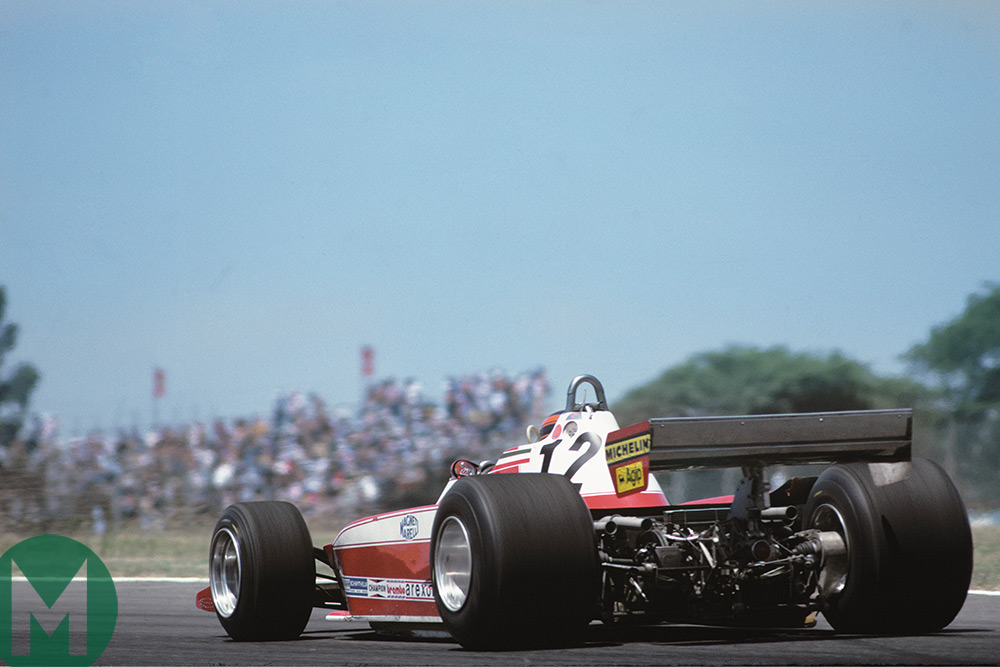 This is the car in which Gilles Villeneuve learned his Formula 1 craft, won over (most of) his critics, became the apple of Enzo’s eye, captured the Tifosi’s heart – and passed into Canadian lore.

Their story had a fanfare beginning at the 1978 United States GP West. Villeneuve had never been to Long Beach before, so, as was his inimitable way, lurid spins dotted his practice as he overstepped even his preternatural hand-to-eye, seat-to-pants limits. He was, though, revelling in the circuit’s claustrophobic challenge and in the feel of his brand new car – he’d driven T3/032 at Kyalami – and secured his first GP front-row slot.

This was only his seventh GP, his sixth with Ferrari and his second in a T3 – yet he led it like a veteran, slipping unscathed from the first hairpin as his should-know-betters locked horns, brakes and wheels. He withstood pressure from the Brabham-Alfas of John Watson and Niki Lauda and his pole-sitting team-mate Carlos Reutemann with such sang froid that the mistake (on lap 39 of 80) came as a genuine surprise. A hurried attempt to lap the Shadow of Clay Regazzoni left 034 in the wall and tyre marks on Regga’s crash helmet.

This win, though, was Reutemann’s. Being his second of a nascent season the charismatic ‘Lole’ looked a good title bet. The championship, however, was about to be tilted on its axis.

Lotus rolled out its paradigm-shifting 79 at Monaco, and though Mario Andretti chose to race the 78, Reutemann and Ferrari’s short spell as realistic favourites ended the moment ‘Lole’ fluffed his start from what had been a dominant pole.

The ground-effect 79 hit the ground sticking two weeks later in Belgium, Ronnie Peterson’s 78 supporting Andretti in a black and gold 1-2. ‘Superswede’ had his own 79 by Spain in early June, and Chapman’s men were again in a class of their own. Although Brabham’s controversial fan car suckered the 79s in Sweden, victories for Andretti and Peterson made Lotus champion constructor as early as August 13.

Ferrari was by this stage fourth in the overall standings after a topsy-turvy mid-season. Villeneuve had been running fourth on lap 63 at Monaco when 034 emerged from the tunnel on three wheels – a blown front-left had pitched it into the barrier. An exact same failure had then kiboshed a potential second at Zolder, Gilles salvaging fourth – his first three points of the season – behind Reutemann.

Enzo had long complained about racing on Goodyears; Michelin, meanwhile, was hamstrung by the lack of miles put under its new-age radials by Renault’s fractious turbo. So this disaffected pair joined forces for 1978.

Goodyear was still blithely knocking out cross-plies when Reutemann’s at-a-canter win in Rio shook the Akron giant to its carcass. Its potential race winners were forthwith given preferential treatment, and qualifying tyres the consistency of putty came on stream. Throw the 79 into Goodyear’s mix and suddenly Ferrari and Michelin were drowning, not winning.

The understeering T3s chomped through their fronts within a dozen laps of Jarama, and the problem was only marginally improved for Anderstorp and Paul Ricard.

The more experienced Reutemann managed this better than Gilles – Carlos’s switch to taller-profile covers turned his mid-gridder into a winner at Brands – but outside the cockpit it was clear who was getting the better of their battle.

And Reutemann didn’t like it. He reckoned T2 had been better, and he had a point – with or without skirts, T3 was never going to be a ground-effect world-beater. Villeneuve, meanwhile, kept quiet counsel and buried the loud pedal, adopting “fantastic angles” to try to negate the understeer. Barring the German GP, he had used 034 to tough out this lean spell: 10th in Spain, ninth in Sweden, 12th in France – lapped each time – and a broken driveshaft in Britain. He had eventually stopped the rot with a mature third in the rain-hit Austrian GP, and then grabbed a gripless point in Holland. It wasn’t until Italy, however, that he conclusively proved Long Beach had been no fluke.

Finally on the taller tyres and the correct front suspension geometry, Villeneuve qualified second at Monza (Reutemann was 11th). He then strove to keep calm during the delays after Peterson’s accident and Jody Scheckter’s Armco-mashing off on the second warm-up lap; as his peers flitted to and fro, Gilles sat quietly in 034 for 45 minutes.

The race didn’t start until gone 6pm. At which point the man on the lights delayed for an age. Villeneuve crept… and snapped, triggering pole man Andretti too. The Ferrari kept the faster Lotus at bay for 36 laps, by which time it had dawned on Andretti that no mistake would be forthcoming – so he scrabbled by at Parabolica. But their efforts counted for nought – bar a title-clinching point for Mario – because both had been penalised a minute for their premature getaways.

Lotus and Andretti’s season faltered thereafter, and Michelin’s latest wares put Ferrari first in the queue for the end-of-season crumbs.

The ousted Reutemann – Jody Scheckter was a shoo-in for 1979 – flicked the Scuderia a victory V at Watkins Glen, the T3s holding a tantalising 1-2 until Villeneuve’s flat-12 let go after 22 laps…

And then it happened, on the following Sunday, on an island in the St Lawrence river, and on a tyre choice Michelin warned would be marginal on full tanks: Villeneuve and 034 won the Canadian GP. True, had it not been for a pinprick in a brake pipe, Lotus’s outstanding stand-in Jean-Pierre Jarier would have cruised it. But not even ‘Jumper’ could deny that Ferrari 312T3, chassis 034, had delivered something far more memorable beneath that October, snow-filled Québec sky.

For more like this, buy Ferrari: from race to road from the Motor Sport shop