Formula 1 has confirmed that there will be three sprint races during the 2022 season and a new points system for the format.

The winner of each sprint will be awarded eight points while the final point-paying positions will now go down to P8 in a sliding scale.

There had been suggestions that there could have been as may as seven sprint events in ’22, though some teams had pushed for an increase in the budget cap in order to facilitate the extra races.

“The Commission unanimously approved the three Sprint events for the coming season, incorporating a number of updates to the format based on the feedback of fans, media and teams,” an FIA statement read.

The format changes will also include an official name change from ‘Sprint Qualifying’ to ‘Sprint’ as well as the awarding of pole position to the fastest driver on the Friday qualifying session.

In 2021 sprint qualifying races were held at Silverstone, Monza and Interlagos.

F1 trialled the concept at each round, with each bringing a dose of controversy on the respective race weekends. 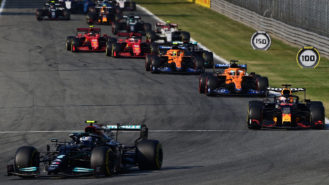 Ross Brawn on F1 sprint races: 'We could have a mini championship'

Formula 1’s third and final sprint weekend experiment of the 2021 season will take place at Interlagos later this month, following on from the earlier trials at Silverstone and Monza.…

Title rivals Max Verstappen and Lewis Hamilton were involved in incidents at every sprint race round, with the most explosive coming at Silverstone on the opening lap of the Sunday race.

F1 managing director of motor sport Ross Brawn had been keen to add as many as six races to the 2022 calendar for this season.

An apparent agreement in principal had been reached according to Brawn late last year but teams have pushed back over cost cap concerns.

It’s definitely being discussed, setting the sprint as a standalone event, having qualifying for Sunday,” Brawn said last year.

“Having a sprint very much as a standalone event, and with its own identity, and its own rewards, I think that’s a stage for the future if we do it. It’s certainly something which we’ve discussed with all the various stakeholders.”