Nikita Mazepin looks to be banned from racing in the British Grand Prix, after UK motor racing’s governing body announced that no Russian-licensed competitors will be allowed to compete in the country.

David Richards, chair of Motorsport UK, said that the decision was made to express solidarity and support with Ukranians following the Russian invasion, supported by Belarus.

The ban will affect any driver with a Russian or Belarussian licence who is planning to compete in a Motorsport UK-governed race but leaves the door open for affected drivers to obtain a licence from another country.

Russian national Alex Malykhin is due to drive in the British GT Championship, while Alexander Smolyar is entered into this year’s British F3 season.

The response also blocks Russian and Belarussian teams from entering British races, and bans national symbols from either country from being shown on uniform, equipment or cars at UK events. 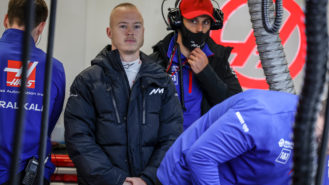 Nikita Mazepin's Formula 1 future appears uncertain after team principal Guenther Steiner was unable to confirm that the driver would remain with the team following the Ukraine invasion. The 22-year-old…

Richards called on other countries to follow the UK and stop Russian drivers or teams from competing.

Yesterday, racing’s international governing body, the FIA, decided not to ban Russian individuals from competing. They can compete under the “FIA flag” in a neutral capacity.

In an emergency session of the World Motor Sport Council, made up of racing officials, the FIA confirmed the cancellation of the Russian Grand Prix. it also announced that no international races will take place in Russia or Belarus until further notice, and has also prevented the display of symbols from both countries.

The International Olympic Committee has called for an international competition ban on all Russian athletes.