Peter Collins was a handsome young man from Kidderminster with a knack for driving fast cars quickly – and with the world at his feet in 1956. 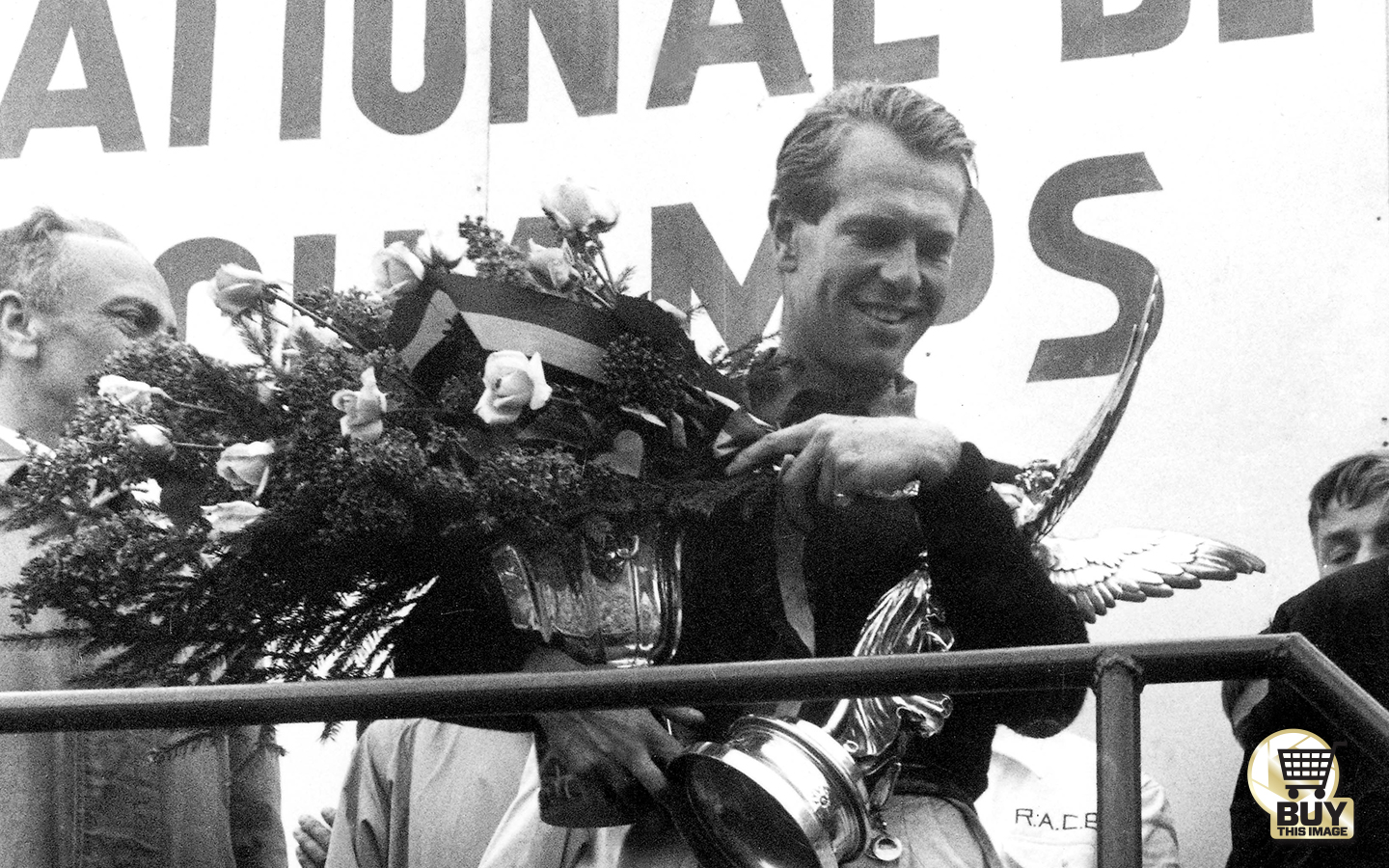 The second teenage sensation to emerge from Britain’s 500cc Formula 3, he had followed closely the career path of the first, Stirling Moss, by making his name in sports car racing – albeit with Aston Martin rather than Jaguar – and with go-ahead HWM of Walton-on-Thames in Formula 2.

Held back at the highest level by his country’s inability to produce a competitive and reliable Grand Prix car – he had signed with Vanwall for 1954 and with BRM for 1955 – he now, again like Moss, bowed to the inevitable by ‘going Italian’.

Except that Collins was protected by and doted on by Enzo because of his willingness to adapt to the Italian way of life and learn the lingo, but most of all for the kindness he showed Enzo’s chronically ill son.

When ‘Dino’, just two months younger than Collins, died of muscular dystrophy in June 1956 – the day before the French GP at Reims – ‘the fine-looking [English] lad… with a pleasant, open face’ briefly became a surrogate son.

It helped, too, that he was no trouble – unlike team leader Juan Fangio.

The latter was distinctly underwhelmed with his new team, which was far removed from the methodical calm and reverential treatment he had experienced and received at Mercedes-Benz.

At Monaco, the Argentinian had driven an uncharacteristically wild race and required two Lancia-Ferrari D50s – commandeering Collins’ mid-race – to finish second behind the 250F of a monumentally composed Moss. 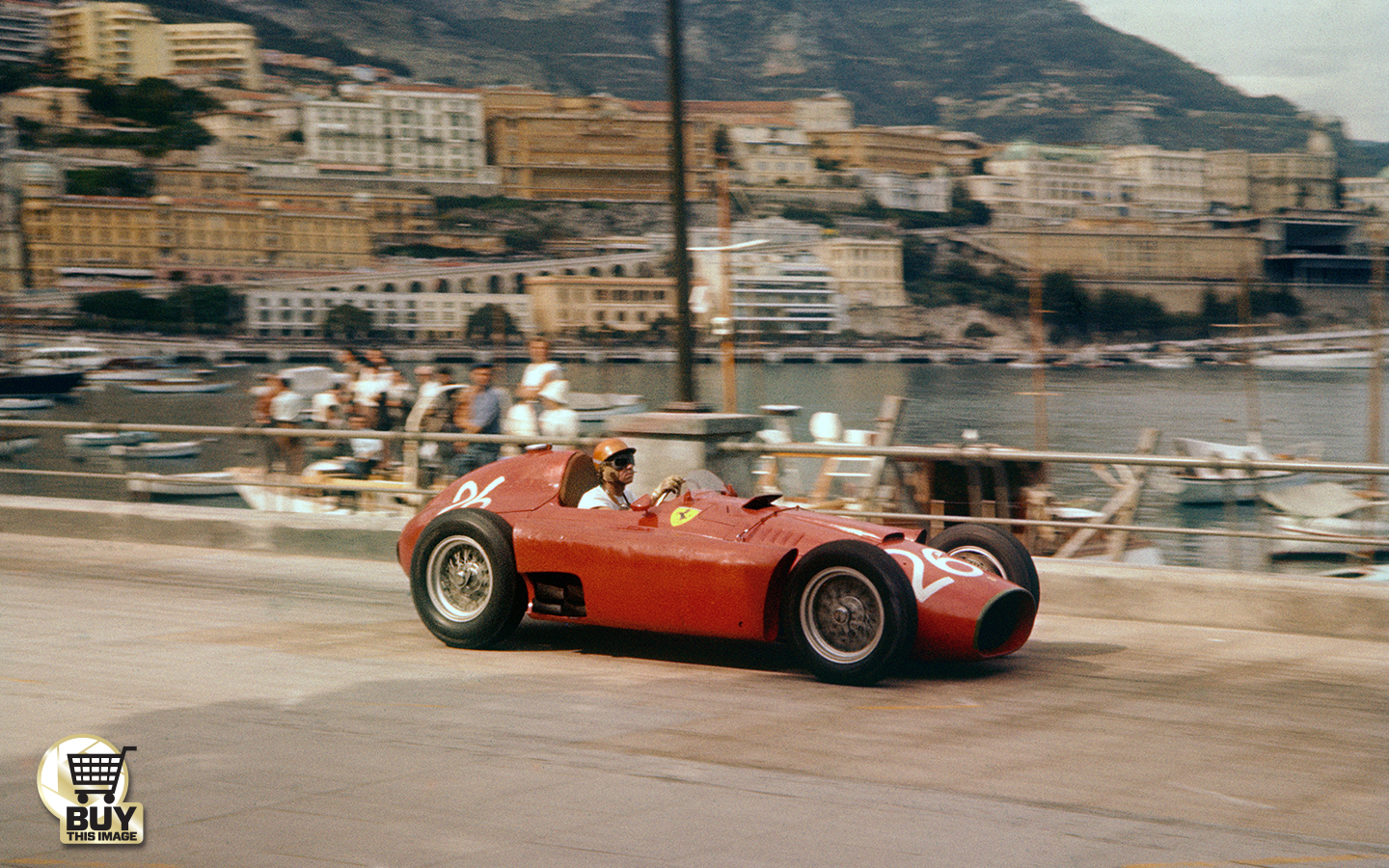 This had followed a grumpy performance at the Mille Miglia – Fangio’s Ferrari’s cockpit awash with rainwater – and staged whispers of sabotage.

Communicating via intermediary and telegram, Enzo and Juan, the two biggest names in the sport, were hardly on first-name terms.

Collins, meanwhile, was simply happy to be there.

He had set fastest lap before retiring from January’s 1000km race at Buenos Aires, won the Giro di Sicilia in April thanks to a dramatic attack in its closing stages, and finished second to inspired team-mate Eugenio Castellotti in the Mille Miglia.

Collins was striking exactly the right balance. He knew that Fangio was on another level. And he knew better not to get involved in the in-house Latin pissing contest between Castellotti and Luigi Musso.

Pete was quick enough, consistent and willing to take instruction.

At Spa-Francorchamps for the Belgian GP, he did no practice on Thursday afternoon as Fangio and Castellotti, the pole-setter of 1955, pounded round in a bid to prove their various points.

It rained on Friday and Collins did only a handful of sighter laps.

And on Saturday a strong wind was blowing into the drivers’ faces on the long Masta Straight. Yet within a handful of laps Collins upstaged Castelotti to qualify third behind Moss and the runaway Fangio.

The latter had broken this road circuit’s 200km/h barrier and was on pole by fully five seconds. 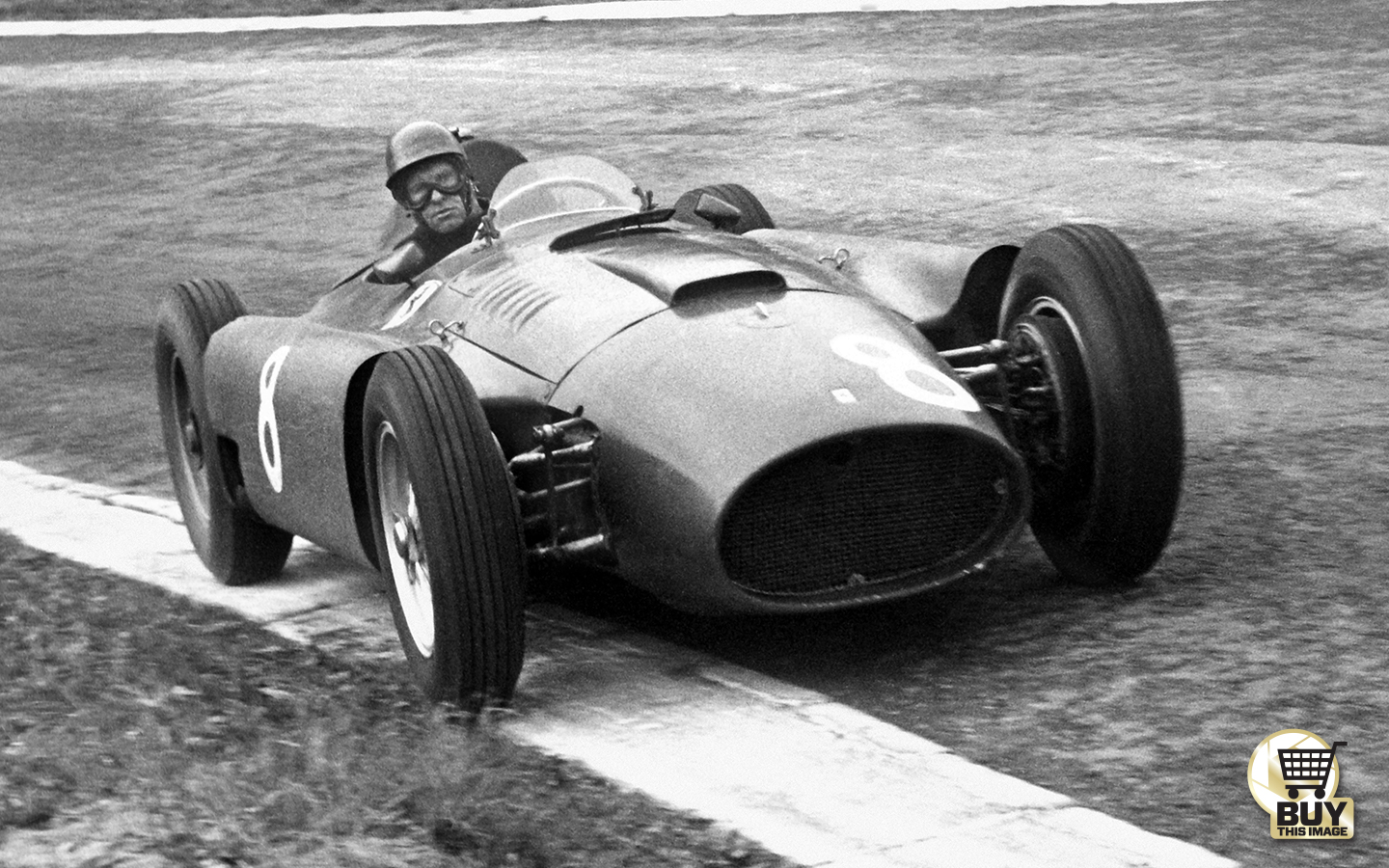 Rain returned for the start and Fangio fluffed his to lie fifth as Moss and Collins led the pack through Eau Rouge.

It took Fangio three laps to clear his team-mates and the Maserati of Jean Behra – by which time Moss was six seconds to the good.

No matter. Fangio swept into the lead on the approach to Stavelot just two laps later.

As the track began to dry Collins, lying fourth, was the first to dip under 4min 20sec.

His feel was impressive.

Then, almost simultaneously, Castellotti retired because of transmission woes and Moss shed a rear wheel/brake drum/hub at the exit of Eau Rouge. With barely a backwards glance, Moss, smart in dark windcheater and dazzling white shoes, sprinted back to the pits and hopped into team-mate Cesare Perdisa’s car.

He charged thereafter, like only he could – Moss, too, was on another level – and Collins wisely stepped aside to allow his compatriot to unlap himself.

His nous was impressive, too.

And all of Collins’ praiseworthy attributes paid dividends when Fangio ground to a halt with a differential ‘blued’ by a lack of oil. Stranded on the far side of the 8.75-mile lap, and with just eight laps remaining, this time there was no chance of switching cars.

He would soon score his second, the day after Dino’s death, to lead the championship by five points. He could do no wrong.

Whereas Fangio could do little right. Seemingly at his wits’ end, he took a break at the behest of a specialist; his manager, meanwhile, insisted that he be given a dedicated mechanic for the remainder of the season.

Victories in Britain and Germany, where only Collins could hold a candle to him – before being gassed by escaping fuel fumes – put Fangio back where he belonged, at the top of the pile. 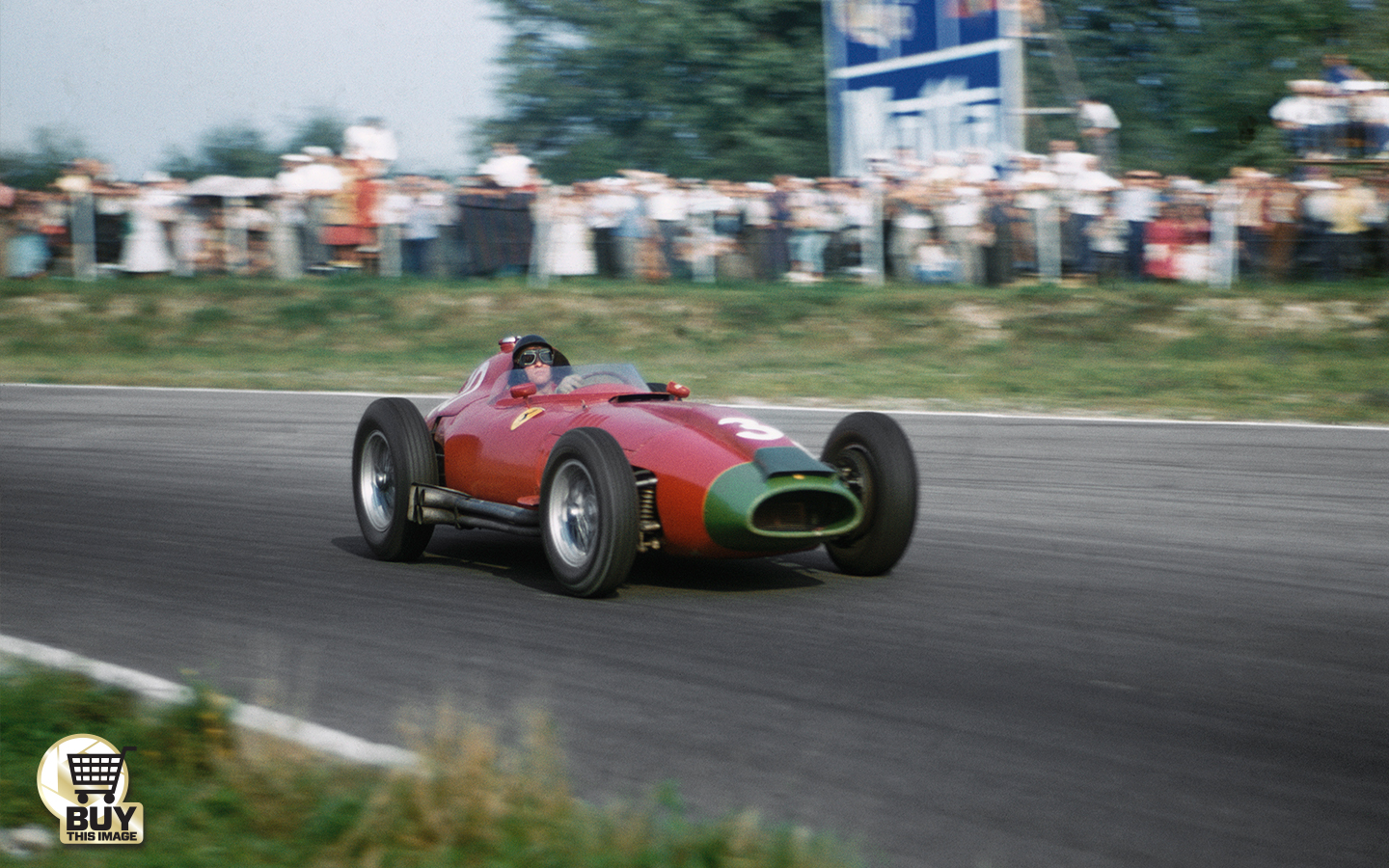 But it was Collins’ unstinting gesture at Monza in September that put it beyond doubt. At a pit box reportedly swimming with accusation, recrimination and self-promotion, he climbed without a moment’s hesitation from his car and gestured an agitated Fangio aboard.

Collins’ chance of becoming world champion at the age of 24 had been indubitably slim but undeniable nevertheless.

His was “a gesture of real nobility.”

Yet it was used by Enzo to highlight the quirks of that “strange man” Fangio.

Not that Collins received Il Drake’s fickle approval for much longer.

He had met American actress Louise King at Monaco: “a divorcee”, Enzo noted snottily, who should have been only a “passing acquaintanceship” for a young man enjoying life.

But Collins chased King to Florida and by 1957 they were married and living on a yacht in Monte Carlo.

All images of this photogenic golden couple appear to indicate that they were deliriously happy yet curmudgeonly Enzo, who undoubtedly revelled in the scurrilous stories and lewd tales of his freewheeling drivers, claimed to have noticed a change in his favourite: “He became irritable.”

Being demoted in July 1958 to the 1.5-litre F2 car at the ultra-fast Reims by way of punishment for perceived underperformance can’t have helped Collins’ mood. A row ensued and only team-mate Mike Hawthorn’s forceful intervention prevented Collins’ humiliation.

This at a race and track where he had won two years before.

Suddenly time and tide seemed against Collins and he drove with a freedom verging on abandon at Silverstone’s British GP a fortnight later. On that occasion it resulted in his greatest victory.

A fortnight later still it perhaps contributed to his death at the Nürburgring.

PS The top three finishers at the 1956 Belgian GP were HWM alumni, Collins and Moss being separated by the Lancia-Ferrari of local hero Paul Frère. Theirs was a poignant result for HWM co-founder John Heath had recently been killed during April’s rainswept Mille Miglia. 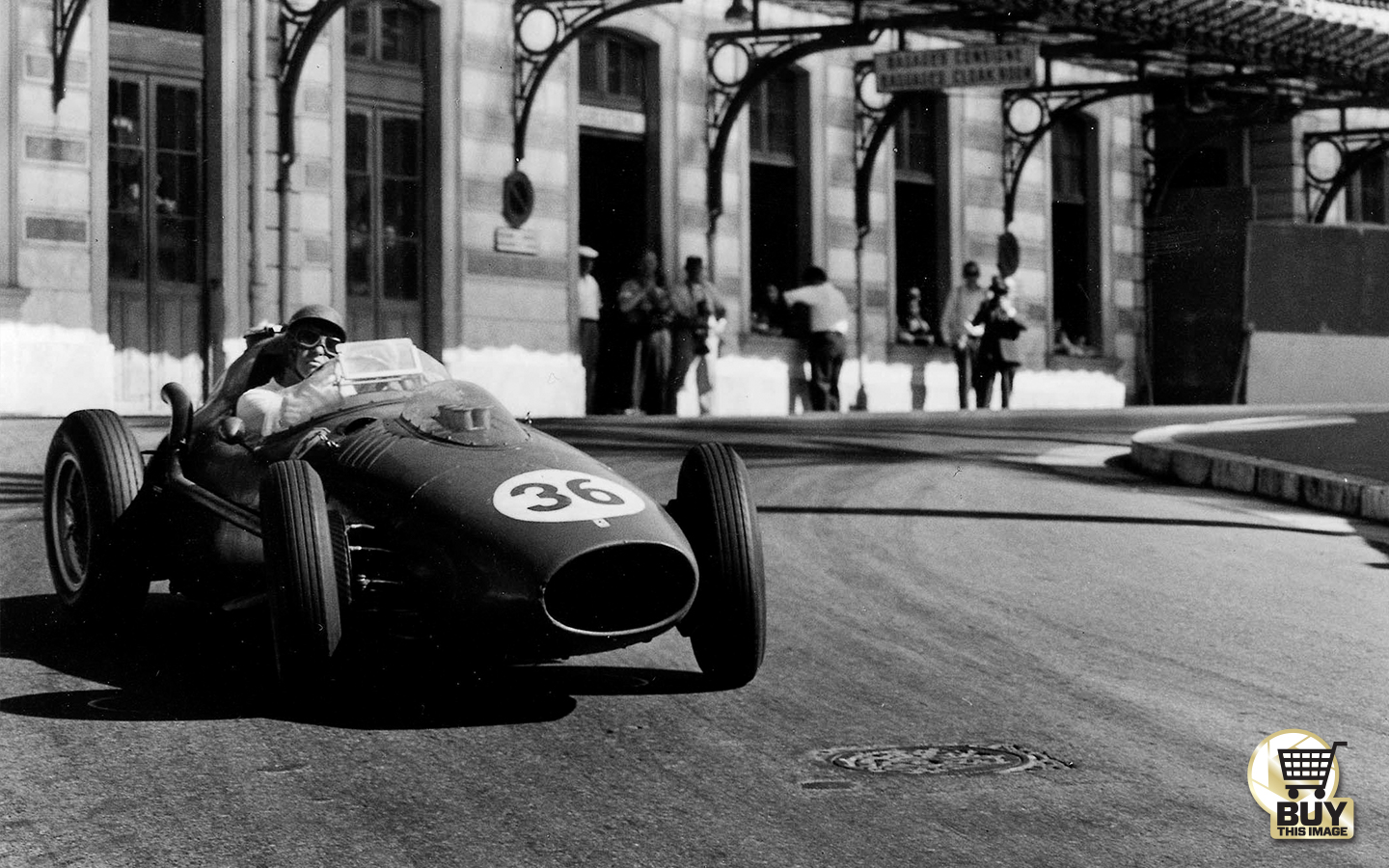