Lando Norris will start the Russian Grand Prix from first, securing his first Formula 1 pole position by half a second from former team-mate Carlos Sainz, while George Russell put in another great lap to secure third.

Lewis Hamilton was on provisional pole but he collided with a wall after an error entering the pits, which left him scrambling at the end. His initial time was good enough for fourth only.

The torrential rain from this morning stopped falling but that didn’t prevent qualifying for the Russian Grand Prix from being a chaotic affair.

Conditions finally reached the critical crossover point from wets to dries in the final five minutes of Q3, forcing everyone to abandon their second intermediate laps and swap to soft tyres.

Here is how a manic Russian GP qualifying session unfolded in Sochi. 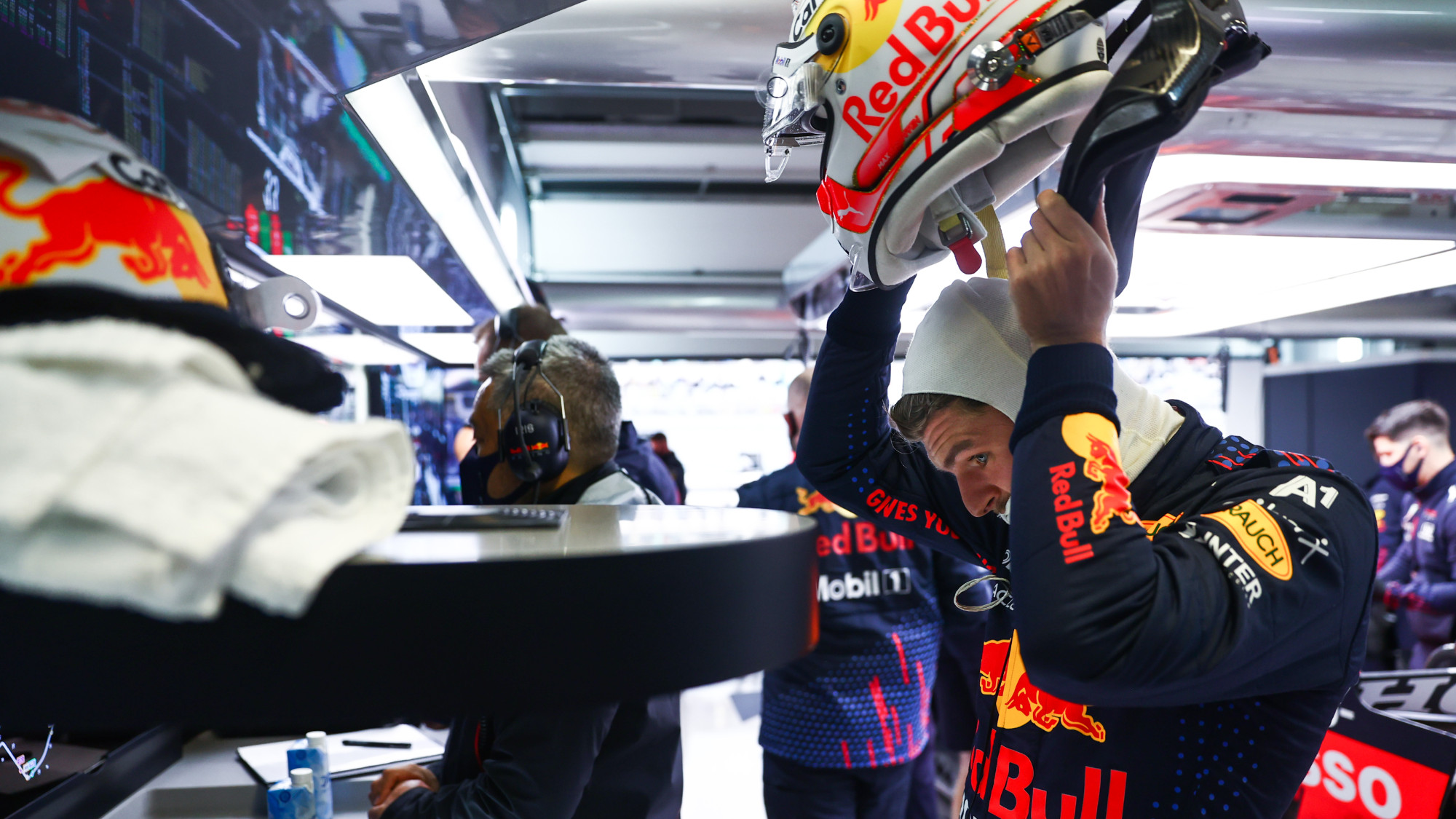 With a break in the weather coinciding with the build-up to qualifying, the session got underway on time with all drivers running intermediates but one.

The AlphaTauris were first onto the track on the green-walled tyres while Alpine’s Fernando Alonso stuck with the wet tyres. Both championship contenders opted for the intermediates.

Pierre Gasly set a 1min 51.519sec for the others to beat on his first flying lap. Charles Leclerc dipped 1.2sec beneath that benchmark to go fastest moments after.

The times tumbled though Nicholas Latifi was informed that more rain was on the way sooner than some predicted.

Antonio Giovinazzi was the first to suffer a spin, dropping the back of his Alfa Romeo out of Turn 16 in front of Leclerc, who was forced to take evasive action to avoid the stationary car.

Max Verstappen pitted before setting a lap time. With two grid penalties hanging over his head, Red Bull opted to play it safe and not run any further. Meanwhile, his championship rival went 1.1sec clear of the pack on a 1min 46.937sec as the clock ticked below 10 minutes remaining.

Latifi jumped up to fourth with a great lap as the track continued to dry out while Alonso had abandoned the wets and went onto intermediates. The Spaniard went P3 on his first effort.

Sergio Perez got a nice slipstream from Nikita Mazepin and used it to good effect. The Mexican went fastest of all with five minutes left of Q1 by 0.4sec over Hamilton.

Bottas improved to just shade that effort by 0.059sec in the closing two minutes though George Russell was struggling to replicate his Spa showing, under threat in 15th entering the final laps. 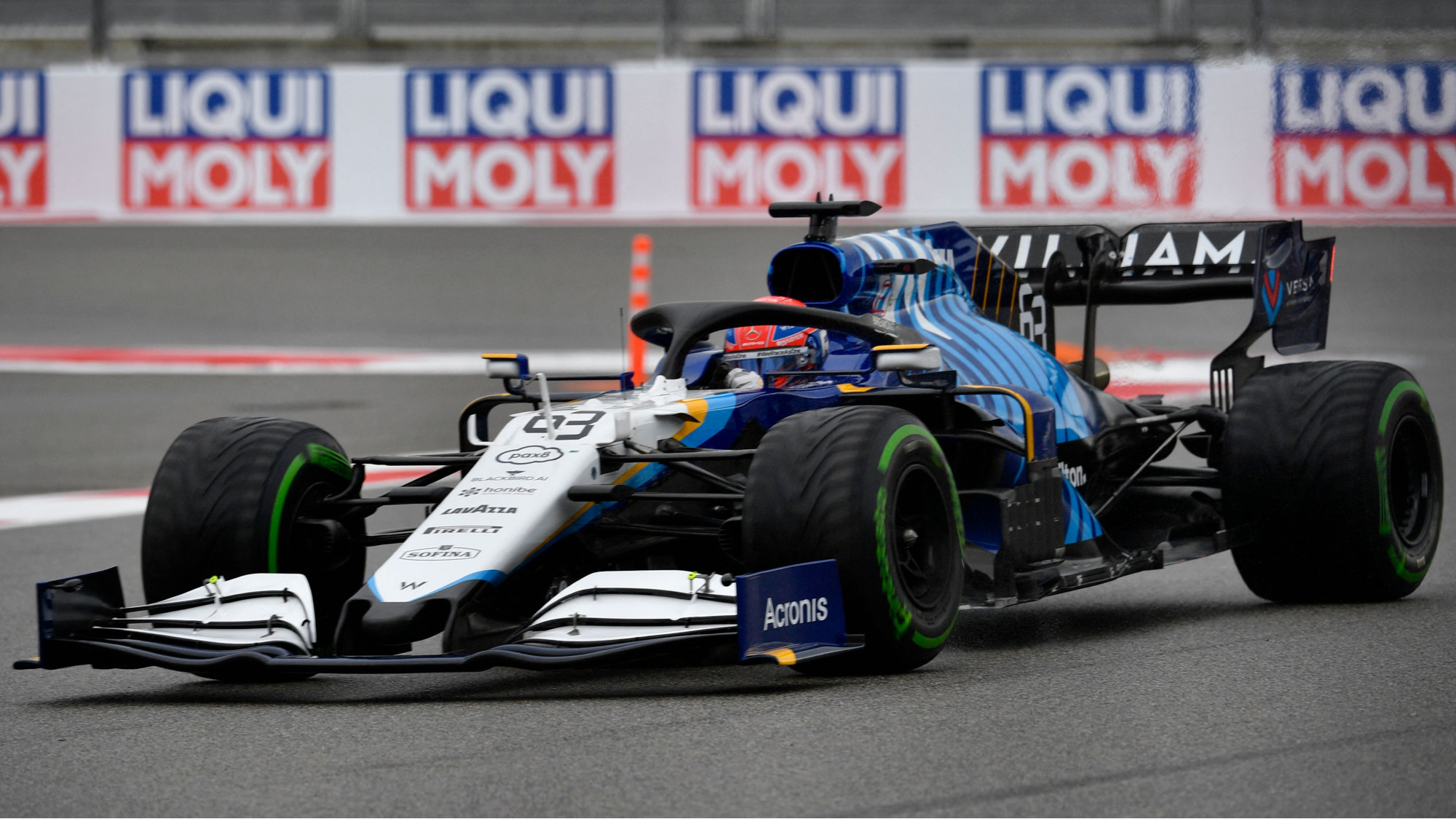 Gasly led the way out of the pit lane once more for the start of the second session, the conditions still requiring intermediates.

The Frenchman reported he had no grip and set a time of 1min 46.671sec as the target to beat.

Norris was the first to dip below it, jumping up to first by 0.4sec until Hamilton bettered that effort with a 1min 46.096sec. Team-mate Bottas had a lock-up at Turn 2 and ran across the run-off on his first flying lap but his second run was a comfortable half-second quicker than anyone.

Alonso and Hamilton found simultaneous improvements as the track continued to dry. The duo went fourth and first respectively with just over five minutes left of the session.

A fourth and final set of intermediates for Russell wasn’t enough to lift him out of the drop zone with just over two minutes to go. He went 11th, separated from a shootout spot by 0.015sec.

Like Verstappen in Q1, Ferrari and Charles Leclerc opted not to run in the second session with a grid drop awaiting him for tomorrow’s race.

Hamilton improved his time as the flag fell to extend his advantage to 0.3sec. Everyone was finding improvements in the final moments

Carlos Sainz lifted himself out of the drop zone to go ninth, Alonso slotted into third while Gasly couldn’t find improvements and was knocked out.

Russell’s first lap wasn’t good enough but, under pressure, he lifted the Williams to ninth and into Q3, knocking Sebastian Vettel out of qualifying.

Leclerc, Latifi, Yuki Tsunoda, Gasly and Vettel all dropped out in the second session. 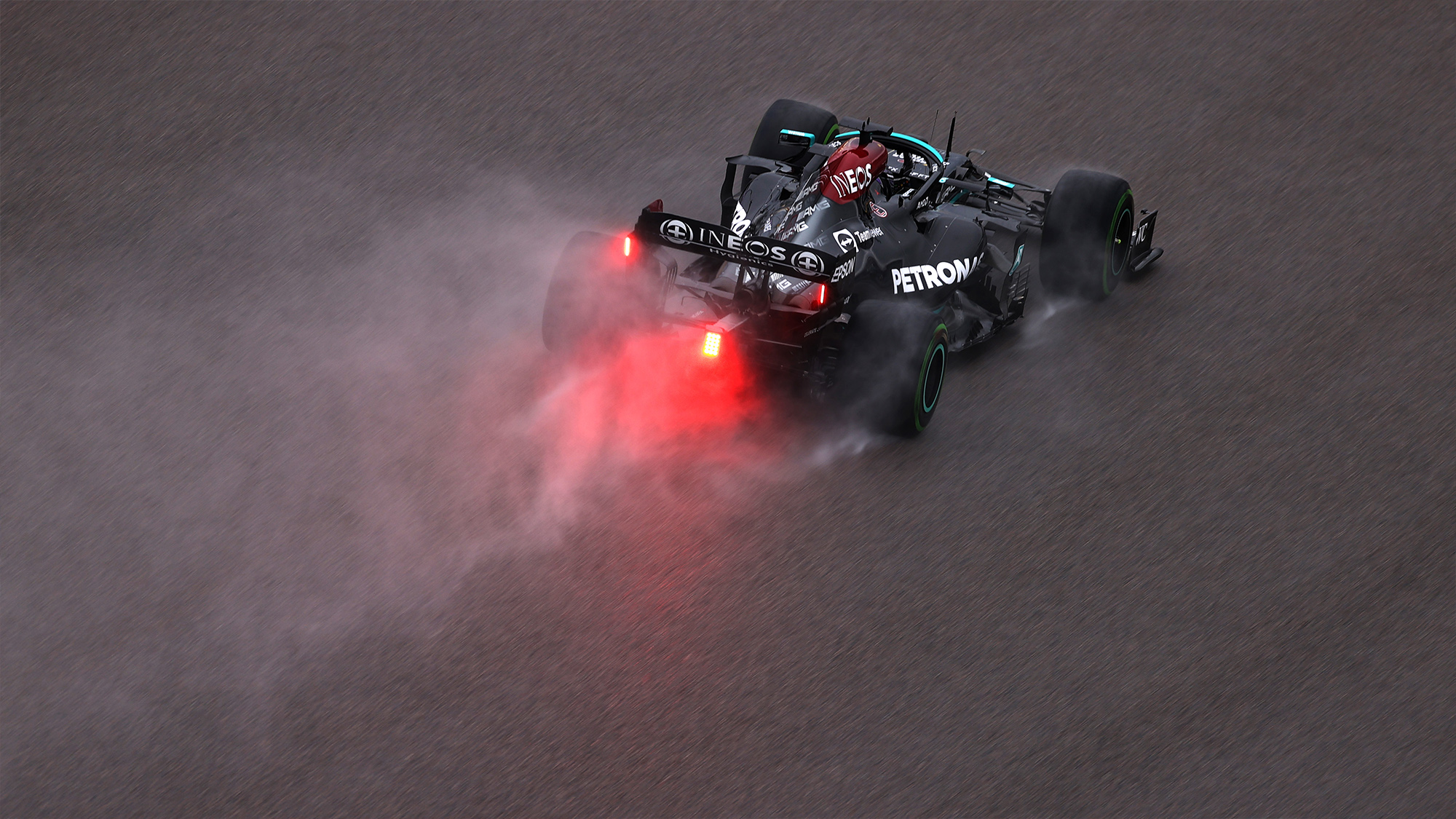 Hamilton hit the wall entering the pits, forcing repairs and leaving him fourth on the grid

No rain had materialised despite some radars predicting a downpour prior to the start of Q3 and the spray had reduced plenty as drivers made their way onto the track for the first runs.

With low ambient and track temperatures though, there was no line dry enough to warrant slick tyres right away.

Hamilton ran wide at Turn 4 onto the wet astroturf on his first attempt but was still quicker through the first sector than Bottas ahead.

Bottas’s 1min 44.7sec was demolished by Hamilton who set a 1min 44.050sec to set provisional pole.

Norris was able to split the two Mercedes drivers and slotted into P2 with seven minutes remaining. Alonso, Perez, Stroll, Ocon, Ricciardo and Sainz rounded out the top 10 that had set a time.

Russell had ventured out on inters but told his team to prepare the slicks as a light grey line was slowly beginning to emerge on the track. He was fitted with softs with six minutes left of the session. His example was followed by Sainz next and the McLarens in the final five minutes.

Hamilton bailed on his second intermediate lap but hit the wall entering the pit lane to swap to slicks, breaking his front wing. The wing was replaced and he was sent on his way, but into the unknown with time only for a single flying lap.

Drivers were generating heat on their first flying laps anticipating the best of the grip to come in the dying seconds of the session.

Hamilton reported he couldn’t generate the temperature in the slicks just as his team-mate started his final effort. Bottas’s first sector was 0.8sec down on the pole time though Carlos Sainz found time in the Ferrari.

The Spaniard was 1.2sec up on the pole time in the middle sector and claimed provisional pole by 1.5sec by the end of the lap. But Norris was still to come and his McLaren surged round to deny his former team-mate pole.

Russell once again found the time in the final lap to jump up to third while Hamilton spun in the final sector, tagging the barriers out of Turn 16. He ended the session fourth.