I am an armchair expert, of the kind as described by Ron Dennis in the afterglow of the 2008 British Grand Prix. I did not watch the race from my armchair but in my expert opinion what I saw was the kind of virtuoso performance that will be spoken of in hushed tones in years to come. I may not be an expert but that is my opinion. 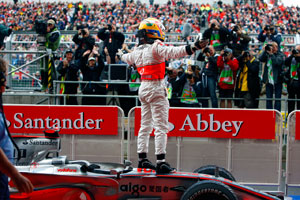 We rarely witness this level of skill. When we do, whether we are in our armchairs or at the side of the track, it is uplifting. Or, as Lewis would say, awesome. We think of Stirling Moss in Monaco, of Jackie Stewart at the Nürburgring, of Jacky Ickx at Spa, or Senna at – well, take your pick. And now Hamilton at Silverstone.

Martin Brundle is also an armchair expert. Martin, however, has the distinct advantage of having driven Grand Prix cars in the pouring rain. When he describes the conditions as both scary and demanding, then you’d better believe it – he’s been there. In poor light, in driving rain, Hamilton simply made the others look merely good. He won by 68.5 seconds, lapped the entire field bar Heidfeld and Barrichello. Two world champions came in a lap behind. After the race he told us that he couldn’t see anything, had to lift up his visor to get a better view of the Tarmac. Is he taking the piss?

Now, unless McLaren MP4-23 chassis number two was being sucked into the ground by some secret fan, this was a drive of pure genius. The former is preposterous, of course, while I believe the latter to be the case. Team-mate Kovalainen, in chassis number five, was beaten fair and square despite starting from pole. And it was from the lights that Hamilton made his intentions known, side by side with the Finn through Copse having made a quite remarkable getaway from the second row. Deciding, perhaps, that a first corner shunt was on the cards, he sat in Kovalainen’s spray for a few laps before disappearing into the distance. How did he do that? How does he find the grip when the rest are spinning in all directions? Alright, Ferrari screwed up with Räikkönen’s tyres, but still the World Champion never looked like winning on Sunday. 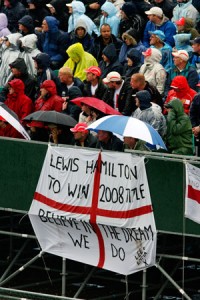 How does he do it? Talent, God-given talent, that’s how he does it. Not fair, I know, and his success at such an early stage has brought all manner of criticism and jealousy out of the woodwork. As you would expect, the man is seen as arrogant, cocky and far too ambitious for his own good. He’s a playboy too, apparently, and has taken his eye off the ball. I don’t think so. Tell me which 23-year-old man, earning squillions of dollars a month and being the number one driver at McLaren-Mercedes would not be having some fun in his spare time? He simply doesn’t need to spend his every waking hour studying his telemetry, fretting over corner entry speeds. He’s like the kid in your class who got a grade ‘A’ in his physics without apparently doing any work while you swotted every night for a pass. Of course, Hamilton does work hard, but he also wants to have some fun.

Many will say this racing driver is not a genius. If he was, they say, he would not have crashed into the back of Raikkonen in Montreal, he would not have over-driven the opening laps at Magny Cours. Come on, the point about those with that special gift is that they are flawed. They are not Gods, they are humans. Mozart was mad, Van Gogh cut off one of his ears, Einstein had trouble with his shoelaces, Tiger Woods has missed a hole in one, Roger Federer lost a tennis match on Sunday. Even Jim Clark and Stirling Moss made the odd mistake.

Lewis Hamilton may never be a World Champion but he is a truly gifted racing driver. Silverstone was no fluke. Think of Fuji last year and Monaco this year. If you were one of those who cheered him round his final lap last Sunday you will want to know that, next Sunday, he will drive his McLaren at the Goodwood Festival of Speed. A chance for you to show your appreciation, perhaps.

If you are one of those who thinks this man should have said: ‘Sorry Mr Mandela, I can’t be on stage in Hyde Park with you and a few other heroes of mine, I’m just too busy psyching myself up for the British Grand Prix’ then reading all of this has wasted your time.