The all-time pole record is Hamilton’s, but what of those (far) down the order? 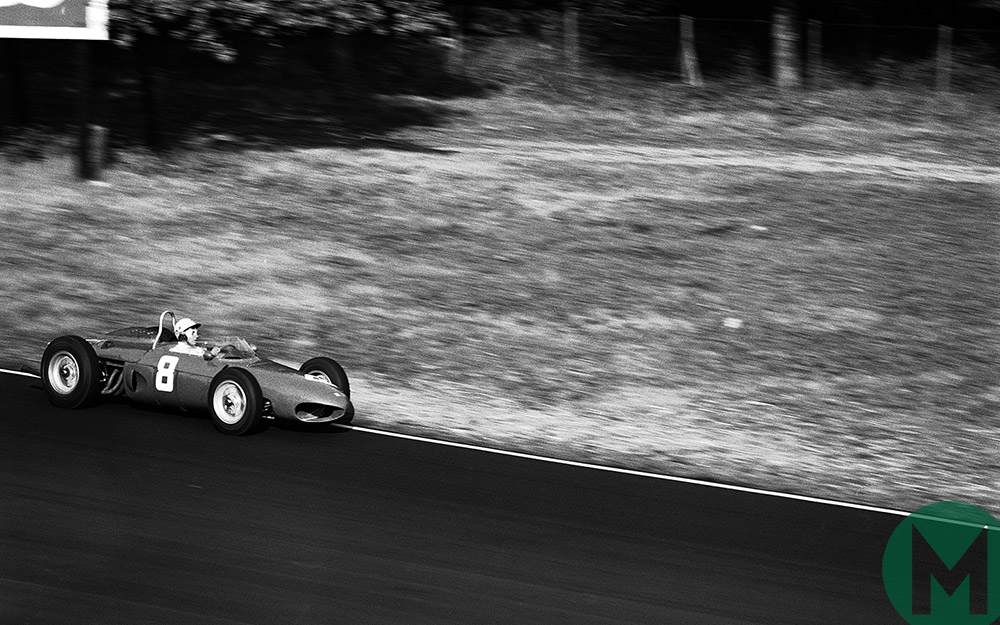 Without wishing to denigrate Lewis Hamilton’s achievement of 69 pole positions – P1s in Q3 in modern parlance – I was taken more by the man alongside him at Monza.

Canada’s Lance Stroll became the youngest to start a world championship Grand Prix from the front row – 56 years after the first teen to do so.

Ricardo Rodríguez, a precocious talent given every encouragement and opportunity by a wealthy father, was 19 years and 208 days when he lined up second for the 1961 Italian GP.

Without wishing to denigrate Stroll’s achievement, the Mexican was making his world championship debut driving for hometown heroes Ferrari – with all the pressure of expectation that that brings.

He was also using an older specification of engine than his four team-mates’ and not given an artificial leg up by a bewildering system of penalties.

It was, however, an ill-fated race.

Title challenger Phil Hill did not appreciate Enzo Ferrari’s agitation of an already tense situation by his pointed inclusion of Rodríguez; his internecine rival Wolfgang von Trips appeared even more unsettled by it.

On lap two of the road circuit and banked track combined, the popular German aristocrat hooked wheels with Jim Clark’s Lotus and helicoptered into a crowd already distracted by privateer Gerry Ashmore’s positing of a Lotus into the trees at Parabolica.

Von Trips was among 16 dead.

Only the day before he had celebrated his maiden pole.

Thirty men, including 11 from when the Indianapolis 500 counted towards the world championship, have one pole to their name.

Only five, including Bill Vukovich (1953) and Pat Flaherty (1956) at Indy, converted theirs into victory.

Though von Trips’ case is its most extreme, disappointment has stalked this stat.

Eugenio Castellotti’s sole pole was born of tragedy. Determined to uphold Lancia’s honour after Alberto Ascari’s fatal accident, and racing as a private entrant after the team’s withdrawal, he shocked Mercedes-Benz in practice at Spa in 1955.

He couldn’t match its race pace, however, nor its reliability: his D50 retired because of gearbox issues. 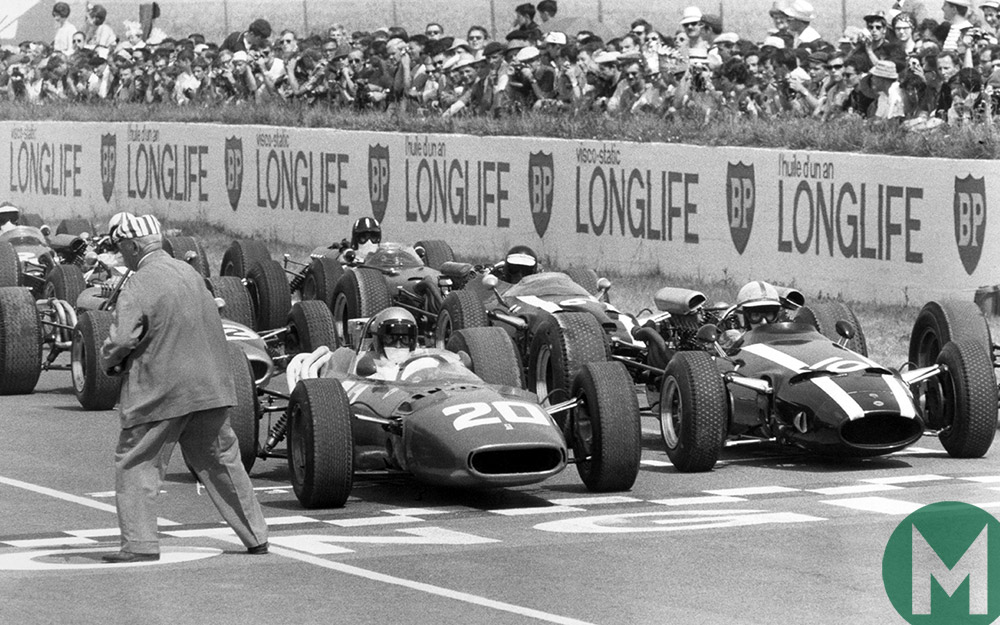 Lorenzo Bandini was also attempting to fill a gaping void – caused by John Surtees’ sudden departure from Ferrari in 1966 – and was doing a fine job of it at Reims when his 312’s throttle cable snapped.

His new team-mate Mike Parkes finished second that day, the occasion of his GP debut, and repeated the result two months later at Monza. Though the Englishman had beaten team-mate Lodovico Scarfiotti to pole by three-tenths, the victory went to the latter.

Though Peter Revson ended qualifying wrapped in catch-fencing, courtesy of his McLaren’s losing a wheel nut, he started the 1972 Canadian GP at Mosport from pole, only to be beaten by the Tyrrell of Jackie Stewart.

Revson’s team-mate Denny Hulme – the 1967 world champion – scored the only pole of his 112-GP career on the debut of McLaren’s iconic M23: the 1973 South African GP at Kyalami. He led briefly before puncturing on debris from the accident that would have claimed Clay Regazzoni’s life but for Mike Hailwood’s bravery and finished fifth.

At the same circuit two years later Brabham’s pole man Carlos Pace, riding high from a recent home victory at Interlagos, was left to rue a tyre choice that saw him lose the lead to Tyrrell’s Jody Scheckter after just two laps; ‘Moco’ would finish fourth.

Scheckter had previous. From the outside of the front row at the 1974 Swedish GP he had beaten pole-sitting Tyrrell team-mate Patrick Depailler to the first corner and thence to the chequered flag.

At the same circuit the following year, allegedly assisted by a prominent team member’s sweeping a pit board across the timing beam, Vittorio Brambilla started from pole and led for 15 laps before his March’s front tyres overheated. He would retire because of a broken CV joint.

The 1975 British GP was a race that Brambilla might have won had it not been halted, he being one of the few not to crash. There were 15 accidents in the rain that swept Silverstone and the first was that of Shadow’s Tom Pryce, who had started from pole.

A burnt coil cost Bruno Giacomelli, on pole by almost eight-tenths, victory at the 1980 United States GP. The mechanic sent to retrieve the stranded car after the race fitted a new one and the Alfa Romeo’s V12 started first time.

In more recent times Nick Heidfeld, Robert Kubica, Heikki Kovalainen and Nico Hülkenberg have finished second, third, fifth and eighth on the occasions of their only pole.

Heidfeld’s Williams-BMW benefited from the last-lap suspension failure of leader Kimi Räikkönen’s McLaren in the 2005 European GP at the Nürburgring; Kubica’s BMW-Sauber was beaten by the Ferraris of Felipe Massa and Räikkönen in the 2008 Bahrain GP; spins saw Kovalainen fall back after briefly taking it to McLaren-Mercedes team-mate Lewis Hamilton, the shining light of the 2008 British GP’s End of Days storm; and Hülkenberg – his pole for Williams at the 2010 Brazilian GP the first for a Cosworth-powered car since 1999 – was gradually overwhelmed despite defending stoutly.

And then there was Daniel Ricciardo, peerless in the rain of Monaco 2016 until Red Bull Racing forgot his – oh, what was it? – er, tyres. Yes, that was it, tyres. Second place behind Hamilton was little, if any, consolation.

But it’s not been all bad.

Jo Bonnier, for beleaguered BRM at the 1959 Dutch GP, and Thierry Boutsen, for burgeoning Williams-Renault at the 1990 Hungary GP, both made the most of their one and only poles, staving off Jack Brabham and Ayrton Senna in the process.

And then there was Pastor Maldonado, antithesis of mild-mannered Bonnier and Boutsen, who beat Fernando Alonso to win the 2012 Spanish GP in a Williams-Renault.

That did happen, right?

Hamilton’s 69th pole, though brilliant and memorable and historic, was a reaffirmation. Whereas Maldonado’s one and only is the surprise that keeps on giving. 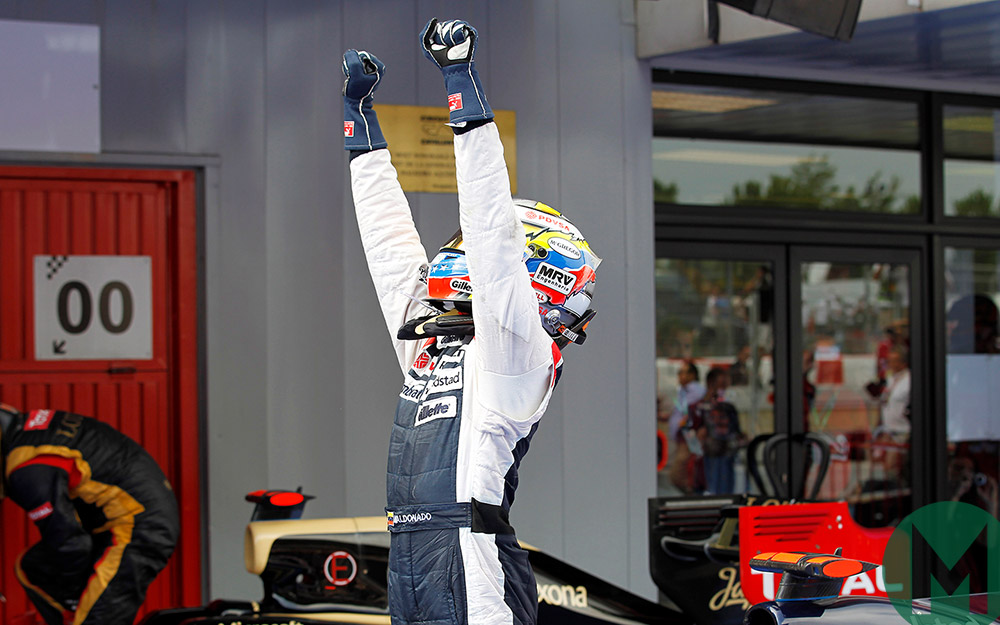