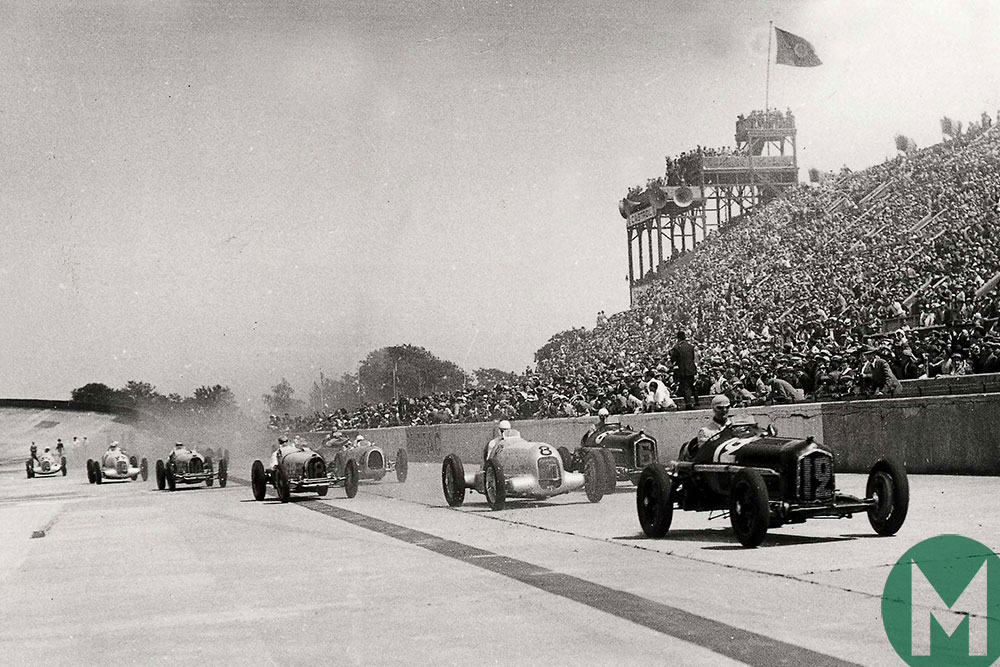 A rivalry that is more than 100 years old began when A.L.F.A. – Anonima Lombarda Fabbrica Automobili – sent two cars to the 1911 Targa Florio; both withdrew due to driver exhaustion. A Mercedes – the merger with Benz would not occur until 1926 – finished third.

Alfa Romeo – entrepreneur/engineer/investor Nicola Romeo bought the company outright in 1918 – had by the mid-1920s seized the GP high ground and the inaugural world championship (in 1925) with Vittorio Jano’s superb P2 design.

After which Alfa Romeo decided to rest on its laurels, as it had before in times of financial hardship, rather ram home its competitive advantage.

Mercedes-Benz, too, was ‘resting’ and star driver and company man Rudolf Caracciola, its brilliant winner of the 1931 Mille Miglia, had been forced to look elsewhere for a ride. His pairing with Tazio Nuvolari in P3s at Alfa Corse for 1932 created a superteam and all the concomitant swirling internal politics.

The world’s two best drivers were then reduced to the rank of privateer in 1933: Caracciola teamed with good friend Louis Chiron whereas Nuvolari’s sister 8C Monza was to be run by Scuderia Ferrari, the prototype modern racing team: an ace, pay drivers, external sponsorship.

Theirs were turbulent seasons: Caracciola’s had not yet started when he smashed his right thigh against the balustrade at Tabac during practice for the Monaco GP; and Nuvolari, disappointed by Alfa Romeo’s inertia, would end his at the wheel of rival Maserati’s 8CM monoplace.

This was the Phoney War. Cue the external politics.

Adolf Hitler’s seizing of power and upon motor sport as a powerful propaganda tool, and his awarding of a 500,000RM stipend – to be shared with upstart start-up Auto Union and thus covering approximately one-fifth of the actual annual cost – put Mercedes-Benz on its mettle and Alfa Romeo on red alert.

The latter had relented finally – the desertion of Nuvolari being a rude wake-up call – and released its P3s from storage to Scuderia Ferrari for the latter stages of 1933.

This car’s 215bhp and 160mph potential was supposed to be the ‘blueprint’ for the 750kg Formula, new for 1934. Neither German team – front-to-back Auto Union in particular – ‘complied’, however, and the first meeting between the Big Three resulted in a resounding victory for Mercedes-Benz’s W25.

Although Alfa Romeo responded with a 1-2-3, led by Chiron, on the foreign soil of the French GP at Montlhéry – where every German car retired – it was clear by the end of the year that the Italian marque was fighting a losing battle.

So Benito Mussolini insisted that Nuvolari and Enzo Ferrari patch their differences for 1935. It was better – their victory in the German GP remains the sport’s greatest upset – but it still wasn’t enough.

Caracciola’s physical and emotional pain – wife Charly had been killed in an avalanche early in 1934 – were becoming increasingly more manageable and he dominated the season in the much-improved B-spec W25.

How then Mercedes-Benz could get W25C so very wrong is bewildering.

A dire 1936 had it running for cover as Auto Union’s Bernd Rosemeyer confirmed the promise he had shown in 1935 – and Alfa Romeo’s Nuvolari strung together a brief but brilliant sequence of success.

He did so in Jano’s Tipo C, which matched at last its rivals on the independent-suspension front but still lagged in the power stakes even when fitted with a new 4.4-litre V12.

Nuvolari’s three victories in June – it would have been four but for insouciant Rosemeyer’s turning a blind eye to the Nürburgring fog during the Eifelrennen – were scored at parkland circuits that placed an onus on handling: Barcelona’s Montjüich, Budapest’s Népliget and Milan’s Sempione.

By the time he won the Coppa Ciano on Livorno’s Montenero circuit in August, Mercedes-Benz had almost given up on the year, and would do so completely three weeks later after a failed reboot for the Swiss GP.

All was not well at Alfa Romeo either, however.

When Nuvolari’s 12C-36 broke its drivetrain at the start in Livorno, he refused the offer of the other 12C and waited instead for Carlos Pintacuda to hand over his older but wieldier 3.8-litre 8C-35 before tearing back into the fray.

And when a year later Jano’s much-delayed ‘lowline’ 12C-37 was given – and failed – its singular chance to prove itself, the men who had (almost) kept Alfa’s head above water went their separate ways: Jano left by mutual consent and Nuvolari switched to Auto Union, returning very occasionally to the fold, before sealing this contentious deal – not even Mussolini could dissuade him – by mid-1938.

Ferrari’s talents were being wasted, too. Alfa Romeo, state-owned since 1932, first bought a controlling interest in his satellite team before disbanding it entirely and drawing him into the revived works Alfa Corse for 1938.

Turns out that Enzo was better at giving orders than taking them. He resigned the following year.

By which time the team was in disarray.

Wilfredo Ricart, Jano’s replacement, was of great intellect verging on phantasmagorical. But Ferrari’s cruel descriptions of this Spanish interloper were coloured by his own frustrations and shortcomings; it was he and designer Gioacchino Colombo who had overseen panicky constructions of straight-eight, V12 and V16 contenders during 1938.

Ricart’s unraced designs were the nuts on a fruit cake. 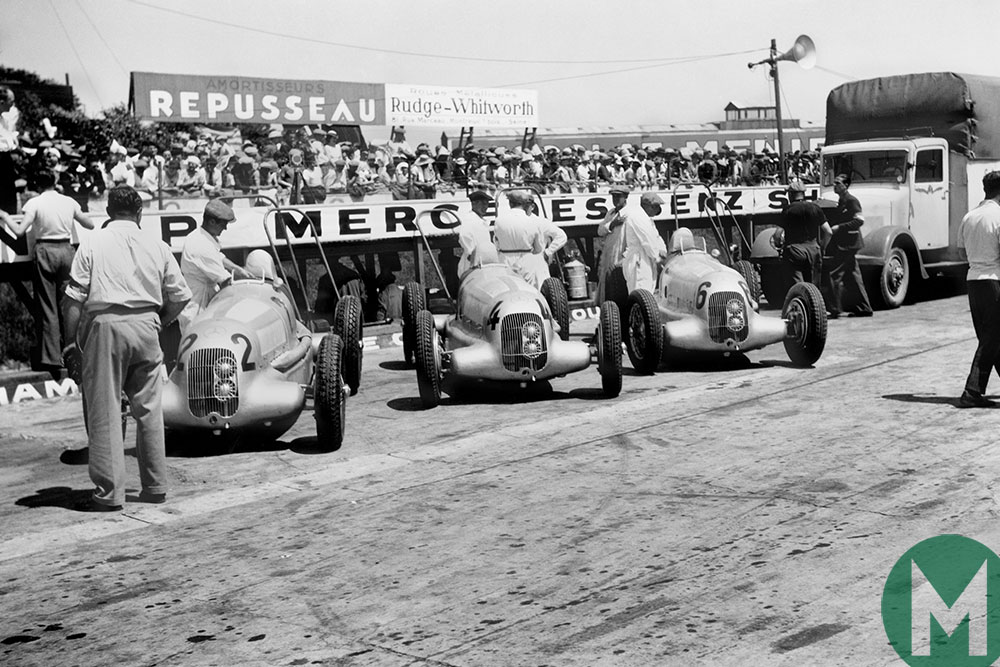 Mercedes-Benz, meanwhile, kept pounding away, its building of a new design by a new designer – Rudolf Uhlenhaut’s immense W125 – for the one-year extension of the 750kg Formula in 1937 being something that not even Auto Union, never mind Alfa Romeo, could afford.

Its hi-tech, screaming 3-litre W154 of 1938 was a further reinforcement of the machine behind these machines. Caracciola was crowned European champion in both cars and also finished second to team-mate Hermann Lang in the W165 voiturette that – for one race only! – really rubbed the running-scared Italians’ noses in it at the 1939 Tripoli GP.

Nuvolari, in turn, did a manful job of replacing the late Rosemeyer at Auto Union and – two days after a real war had been declared – won the Yugoslav GP.

Two past-it Alfas were entered – perhaps by exhausted Alfa Corse or maybe not – for that race in Belgrade’s Kalemegdan Park but were no-shows.

The rematch 80 years later will, by twists of globalising fate, pair the car of top dogs Mercedes-Benz designed and built close to the converted RAF bomber base whose perimeter road was crucial to Britain’s post-WWII motor sport revolution; and underdog Alfa Romeo’s will roll out of resolutely neutral Switzerland.