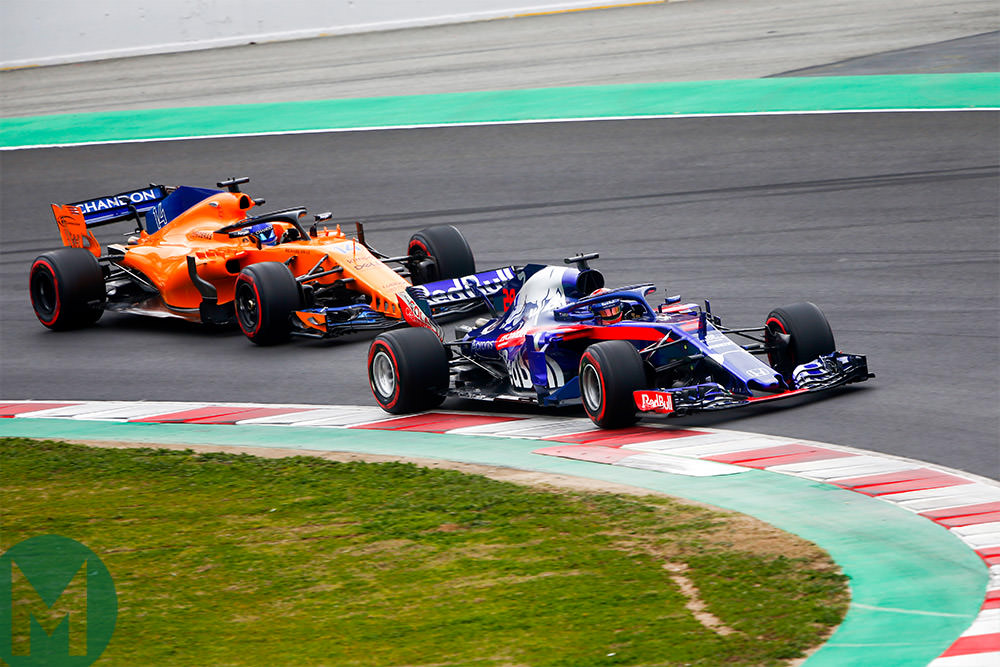 A news report recently replayed a clip from the Brighton hotel bombing of 1984, when the IRA attempted to assassinate the then prime minister Margaret Thatcher. The news crew had collared an elderly and redoubtable lady, who was evidently a guest at the hotel. They asked her whether she would be moving to alternative and less hazardous lodgings. “Certainly not,” she replied, the smouldering hotel behind her now crawling with police searching for more bombs. “By the time they have finished, this will be the safest hotel in the country.”

A similar sentiment occurred to me after watching the latest round of Formula 1 testing where the Honda-powered Toro Rosso looked in such fine and reliable fettle. After such a disastrous season last year, you can only presume that Honda has thrown everything at improving the engine that was in danger of making it an international laughing stock. All leave cancelled and working in shifts, engineers would have been crawling over that power unit like, well, police officers over the Brighton hotel. “We are happy with the Honda engine which is doing a fantastic job,” said Franz Tost, the Toro Rosso boss, barely able to contain his smile. McLaren may yet come to regret checking out so early.

David Richards is now arguably the most influential man in British motor sport – certainly as the new chairman of the MSA he has the power to shape the future of racing in a way that few others can. He is under no illusions about the task ahead. In the latest issue of the MSA’s in-house magazine (which will be landing on doormats next week) he spells out the challenges the sport faces, not least the danger of it becoming elitist, enjoyed by the few who can afford to indulge their passion, rather than the many grass-roots enthusiasts who currently make it what it is. On a recent visit to the MSA headquarters in Colnbrook I am pleased to report that Richards has lost no time in leading by example: he has removed the Chairman sign reserving his parking spot outside the main doors. “He wanted it to be open to the public, rather than reserved exclusively for him,” explained a worker bee.

It is not often that Motor Sport dabbles in the combustible word of politics and we don’t intend to start now. But I feel duty-bound to report that Henry Bolton, the erstwhile leader of UKIP, has announced that he is to launch a new party called OneNation. Why is this noteworthy? Well, because of his chosen party colours. In a press release sent out announcing the party’s creation, Bolton said: “The colour of OneNation is British Racing Green. BRG was the international motor racing colour of the United Kingdom. It represents British branding and excellence.” Leaving aside any queasiness about BRG being commandeered by a political party, it is worth recapping the roots of the colour. In the early days of motor sport the Germans competed in white, the French in blue, the US in red and Britain in olive green. It’s unclear why the colour was chosen but some think it was to reflect the standard colour of many British-built industrial machines of the time. In 1903 the Gordon Bennett Trophy was to be run in the UK but with racing on public roads banned, the organisers switched it to Ireland (then still part of Great Britain). In honour of their hosts the olive green was changed to emerald green and British Racing Green was born. Whether the Irish origins of British Racing Green are fully appreciated by OneNation is unclear.

Tiff Needell is never short of an opinion and is always entertaining company. Over a full English last week at Thruxton race track, where we were filming for an upcoming video (watch this space), he was his usual effervescent self on the subject of TCR, the new and much-hyped tin-top racing series. It is fair to say he wasn’t exactly thrilled by the prospect. “If they are struggling to get 15 cars for the Clio Cup then they are really going to struggle with this TCR,” he said. As it happens he was more on the money than he knew. A couple of days later at the TCR launch event there were a mere five cars on display and only slightly more journalists. “Are you sure you’ve got all you need from today,” said the lady at the gate rather plaintively as we left. The organisers have rescheduled the event for the day before the first round, which is due to take place on the weekend of March 31 and April 1. Whether the turn-out on Good Friday bank holiday will be any better remains to be seen. But Tiff’s prediction for the rest of the season looks unlikely to be proved wrong.