Try to imagine your ideal street track, and the only limits are your imagination. It would be fast and challenging; a touch daunting. It would have sharp gradient changes – all plunges, climbs and swoops. It would be scenic, amid attractive parkland with elegant, classical architecture, domes and spires. And it would be in a vibrant city.

This circuit existed. It was called Montjuïc Park in Barcelona, and it held Formula 1’s Spanish Grand Prix four times between 1969 and 1975.

“This was the greatest street circuit I ever saw,” Nigel Roebuck explained for Motor Sport. “Imagine Monaco, but with more variety of turn and gradient, and much faster, and some flavour of Montjuïc Park should then emerge.”

The CSI men thought things through — and opted to scarper. “What is a safe circuit, anyway?” said one of their number

Yet its short lifespan as an F1 host also hints at the track’s ill fate. The final visit in ’75 was one of the most notorious weekends in F1’s history. The race was 45 years ago today.

All turned up then to find the Montjuïc crash barriers in a wholly unsatisfactory state. Some bolts holding the plates were only finger tight, others were missing. Some plates had gaps between them, others had worn bolt holes. Many posts also were inadequate, rocking easily in your hand.

The drivers, organised under the Grand Prix Drivers’ Association (GPDA), refused to drive. With justification, as poorly-fitted barriers were a factor in the recent deaths of Helmuth Koinigg, Peter Revson and François Cevert. Mario Andretti noted also that under Spanish law a driver was liable in civil court for any harm done to spectators. 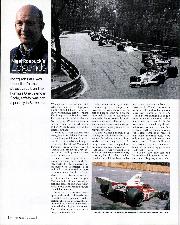 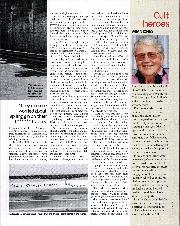 When people ask me which I think is the most impressive vantage point on any circuit I have visited, my answer unfailingly surprises them. Eau Rouge at Spa? Suzuka's 130R?…

Not everyone was sympathetic though. Denis Jenkinson in Motor Sport likened the stance to “saying climbing a Swiss mountain was more dangerous than taking a walk through the English countryside!” The spectators also had little audible sympathy.

Meanwhile the CSI, as the FIA’s sporting arm was then known, wasn’t much help. Even if you could find them. “The CSI men thought things through — and opted to scarper,” recalled Roebuck. “‘What is a safe circuit, anyway?’ said one of their number, Claude Le Guezec. So that was helpful.’”

Circuit officials on Friday promised overnight repairs yet, with five miles of two-tier Armco to sort, the task looked Herculean. And Jenks observed the circuit had but a “a small gang of workmen”. 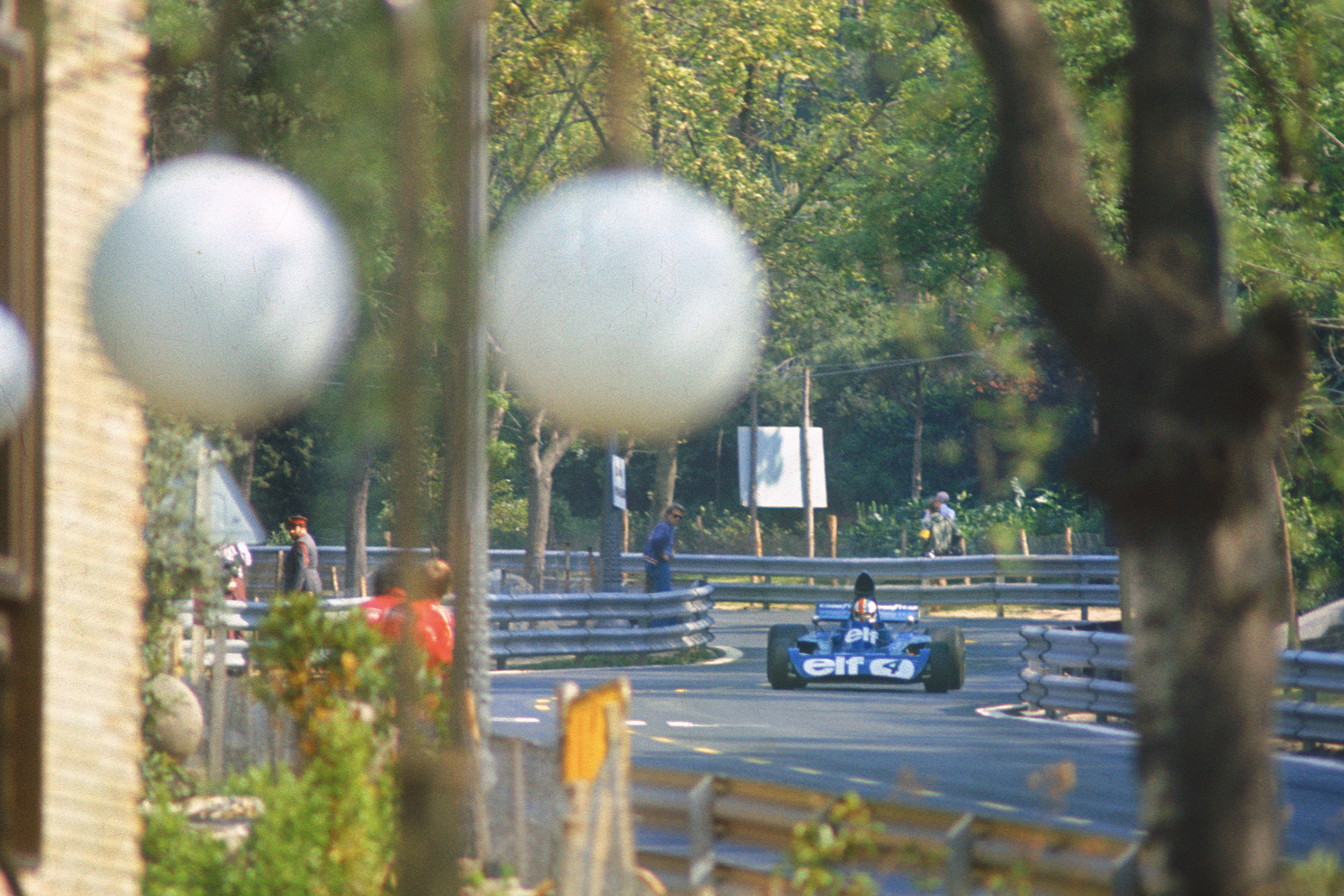 François Cevert, here in 1973, among the climbs and swoops of Montjuïch Park

Come Saturday things had indeed barely improved, so from midday the teams headed out to do the barrier repairs themselves. “The constructors and their work-force attacked the most crucial points on the circuit and the general feeling was that the circuit was 90% to CSI standards, and the FIA stewards accepted the circuit to be ready for racing,” said Jenks.

Then as Saturday afternoon drew on the local organisers chose the nuclear option. They gave the drivers a flat ultimatum: either the entrants’ contractual commitments would be honoured or there would be legal action.

This would mean the Spanish police impounding the teams’ equipment pending litigation. And the Montjuïc paddock was for the first time inside a derelict Olympic stadium which could be locked up within seconds.

The drivers’ unity, under pressure, dissolved. “Some team managers were making open threats of cancelling contracts or reducing the financial inducements,” Jenks reported, “while others went to the Texaco caravan [where the drivers were stationed] to drag their drivers out by the hair, or anything else they could grab hold of. The whole affair had become so sick it was no longer funny.

“One by one the drivers appeared in the pits, some with looks of relief on their faces, others looking very poker-faced, and last to appear was Emerson Fittipaldi who was greeted with whistles and cat-calls from the Spanish public in the grandstands.” 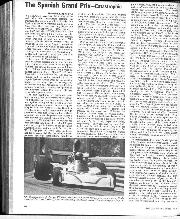 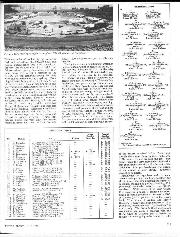 Barcelona, April 27th WE SHOULD have seen the writing on the wall when the transporters carrying the Formula One circus crossed the frontier into Spain with little or no trouble,…

It had been suggested drivers could do only the stipulated minimum three laps, at low speed. Fittipaldi – rather the dispute’s leader – did just that then went home, while Wilson Fittipaldi and Arturo Merzario withdrew on the race’s first lap. However the rest, given a competitive situation, couldn’t help themselves.

A single late-Saturday practice session decided the grid. Then the race was, in the words of Autocourse, “short and sharp and not at all sweet”. It was, Jenks observed, “as if the GPDA were deliberately putting the safety-barriers to the test.”

The first shunt was before the first corner. The Ferraris, Niki Lauda ahead of Clay Regazzoni, filled the front row, but under braking for the first hairpin Lauda was nudged in the back by Mario Andretti who’d in turn been hit by Vittorio Brambilla. This sent Lauda’s Ferrari broadside into Regazzoni. Lauda was out and his fellow Ferrari continued several laps down after repairs.

It all left Hunt in his Hesketh in the lead, followed by Andretti’s now-askew Parnelli and then John Watson, going amazingly in his Surtees.

Hunt slapped a barrier after hitting oil on lap 7; Watson then had a lengthy pitstop reporting vibrations. And on lap 17 Andretti’s battered rear suspension came away.

This all left the unlikely Rolf Stommelen leading a grand prix for the first time in his Hill, with Carlos Pace’s Brabham monstering him.

And then it happened. On lap 26 of the scheduled 75, Stommelen’s rear wing came off at 150mph as he approached the gentle left hander on a sharp brow at the start of the lap.

The car snapped left into the barrier then rebounded across the track to the right and, as the crest made the barrier beyond ‘low’ by comparison, scraped over the top of the Armco before dropping over it where it killed five onlookers.

Pace also got caught up in Stommelen’s incident. Stommelen survived but with both legs, a wrist and two ribs broken. 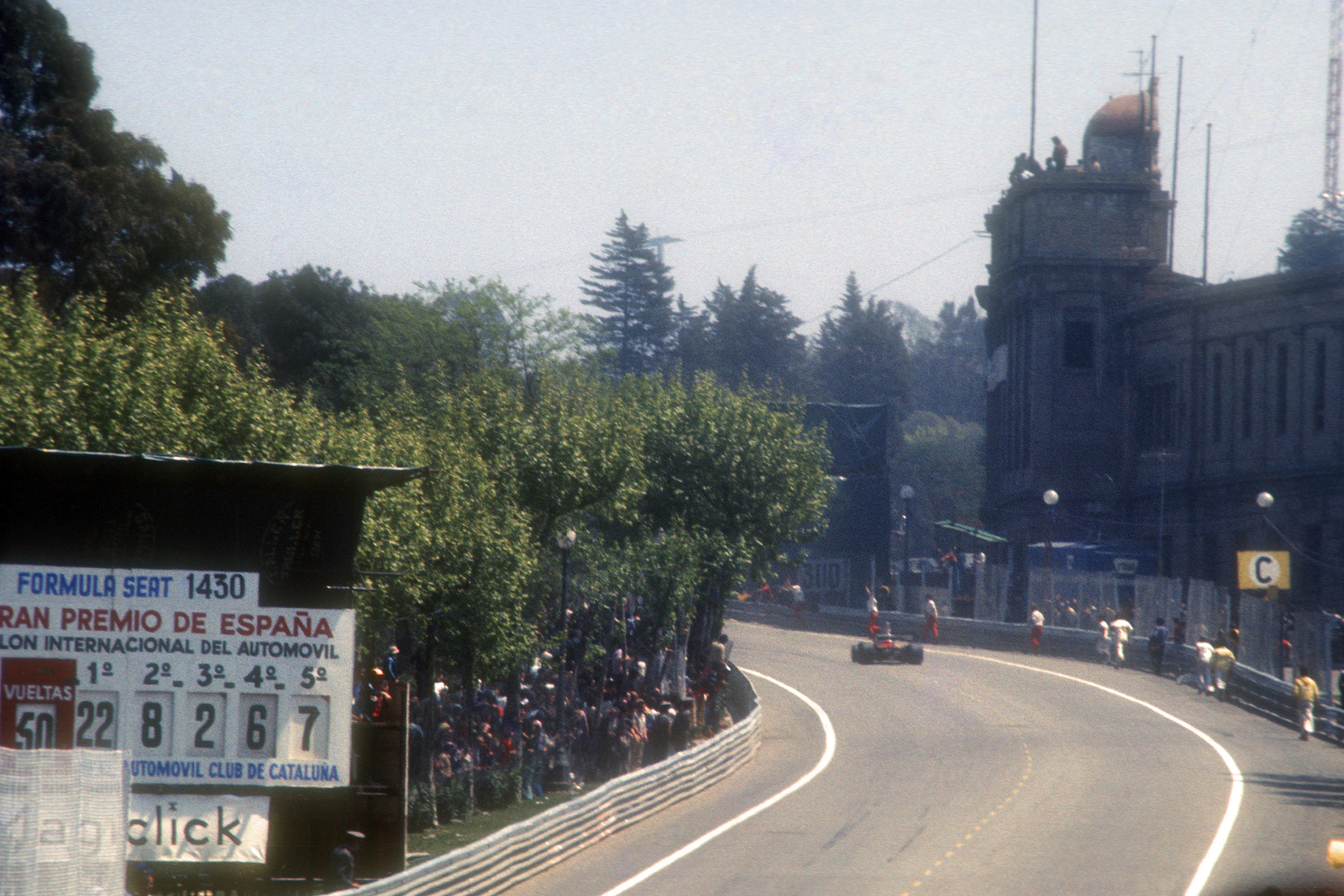 Mechanics rush to the scene of Stommelen’s accident

Contrary to some belief, the barrier stood up to the impact. “By supreme irony Stommelen hit the very guardrails secured by his own mechanics,” Roebuck noted. “Had the work not been done, the car’s momentum would have been unchecked and the carnage beyond contemplation. Immediately beyond the marshals’ area was a spectator enclosure.”

The race, astonishingly, continued for another four laps before being halted. “What followed was like a scene from Hades,” Roebuck continued, “with shocked people spilling all over the road, sirens screaming, the Guardia Civil of Franco’s Spain lashing out with their batons at anything that moved.”

McLaren’s Jochen Mass, who just happened to be leading the few remaining runners at the stoppage, got his only grand prix victory, while Lella Lombardi became still the only female F1 points scorer (or, rather, half-a-point scorer due to the shortened race).

The weekend also represented a seismic shift in F1 power. Drivers before then had regularly got races ditched on safety grounds. “But,” said Peter Windsor at 1975’s end, “this time there was a twist: the drivers lost.

“The constructors had loaded themselves up with appearance contracts they couldn’t break, and they had sufficient power to make the GPDA feel obliged to race.”

The constructors, led by Bernie Ecclestone, would dominate F1 while driver power was never the same again.

The weekend was seismic in another way too. “The earlier controversies were unconnected with the disaster on race day,” Roebuck added, “but of course the gutter press took no account of that, and Montjuïc, sadly, was vilified out of existence. Like anyone else who ever went there, I miss it still.”