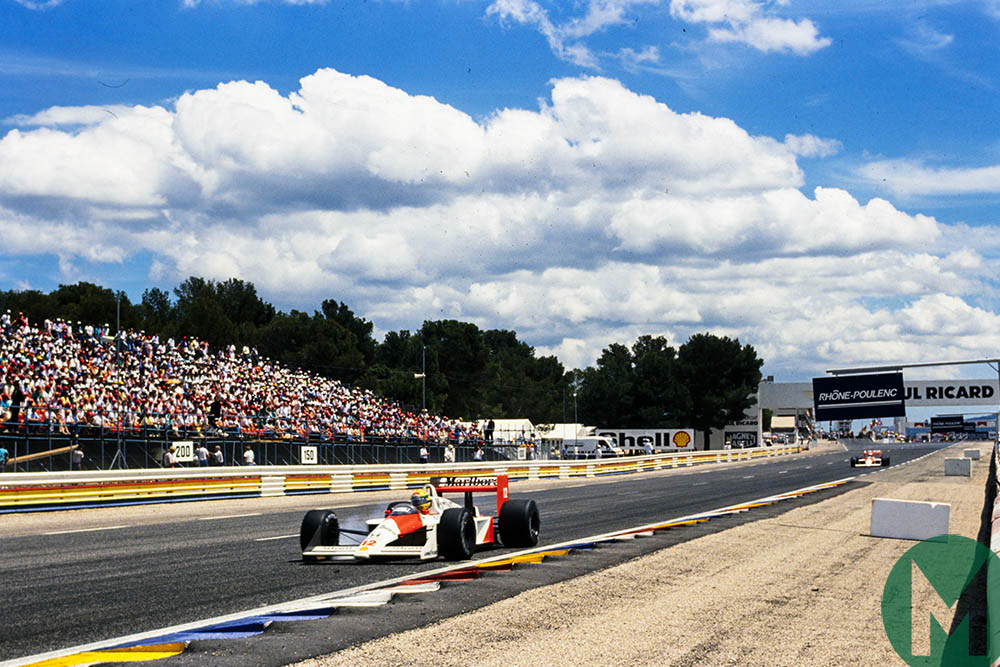 In 14 of the 19 years between 1971 and 1990, Paul Ricard was the host of the French Grand Prix. Although it remained a testing venue of choice, the race didn’t return there until last year, after a gap of 28 years. Arriving there then was like a nostalgic step back in time, to a jet-set European glamour of the 1970s and early ‘80s. Set on a mountain plateau in beautiful southern French countryside, it featured an adjacent runway for private jets. How Duran Duran music video is that?

However, the diabolical traffic gave a reminder that not everything was great back in the day. This, said those few in the media centre who’d been there first time around, was what it was always like. Eric Boullier, the former Renault and McLaren team boss now in charge of the event, assures fans that this aspect will be vastly improved this year, that they won’t be trying to squeeze 10,000 cars through a single gate on Thursday, for example.

Monsieur Ricard’s track, with its vast run-off areas and such civilised features such as permanent pit garages and dedicated press room was the blueprint for what was to come as the sport began to move away from its more brutal excesses to a glossier but less raw future, partly thanks to Jackie Stewart’s long-running safety campaign. 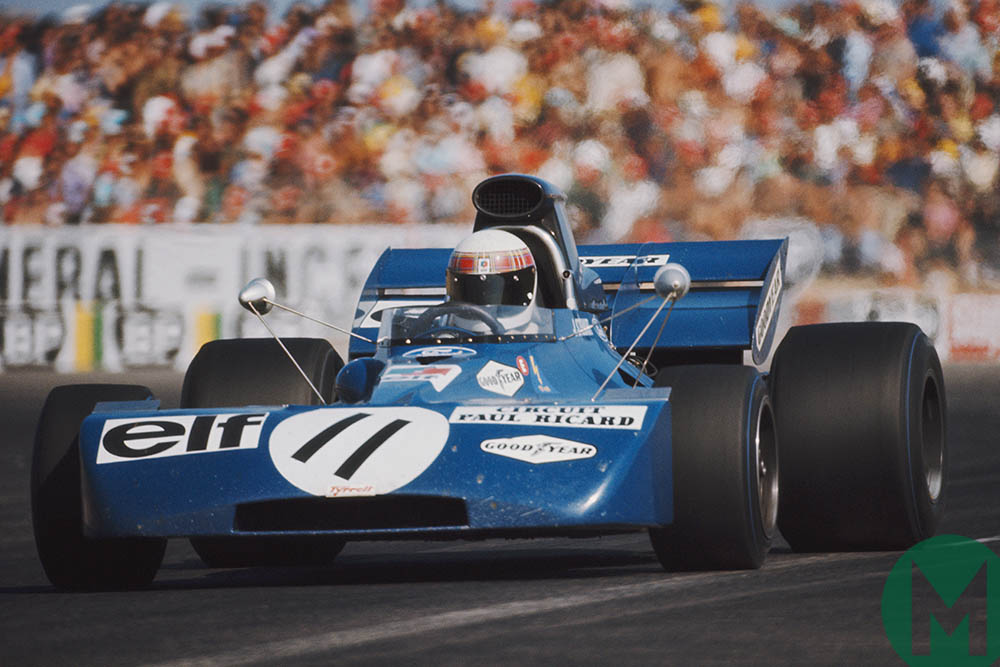 It was Stewart who dominated that first race, his Tyrrell fitted with an upgraded DFV from Cosworth that, to the surprise of many, blew the 12-cylinder Ferrari’s socks off down the long Mistral straight. Ricard would alternate in hosting the country’s grand prix with other venues for a time, but not with any regular pattern. It was next there in 1973 as Ronnie Peterson won a grand prix for the first time. For a driver who’d finished runner-up in the ’71 world championship and blitzed a series of spectacular poles in his JPS Lotus 72, it had been a long time coming. He inherited it only after a collision between his team-mate Emerson Fittipaldi and the race-leading McLaren M23 of sensational newcomer Jody Scheckter.

In 1975 Niki Lauda was dominant in Mauro Forghieri’s masterpiece, the Ferrari 312T, on his way to his first world title. James Hunt’s Hesketh – which had beaten Lauda to victory at a wet/dry Zandvoort a couple of weeks earlier – was his closest challenger. A year later and both men starred again as they fought for the world title, Hunt now driving for McLaren and winning – but only after Lauda’s 312T2 retired from a good lead with a mechanical failure. The backstory behind that failure was that Lauda believed Ferrari had become complacent after the ’75 title win and had told Enzo Ferrari as much. So the Old Man was keen to score points off Lauda on this occasion, claiming that the driver had cut short a test session in the previous week because of other commitments. It was the beginning of the breakdown of a relationship between the two men that both would come to regret.

Mario Andretti headed a comfortable JPS Lotus 79 1-2 from Ronnie Peterson in ’78, this despite John Watson having put the Brabham-Alfa BT46, no longer fan-assisted, on pole. It was in testing for this race that Lauda had been surprised to find Hunt, having pulled off the circuit, fast asleep in his car after a heavy night! 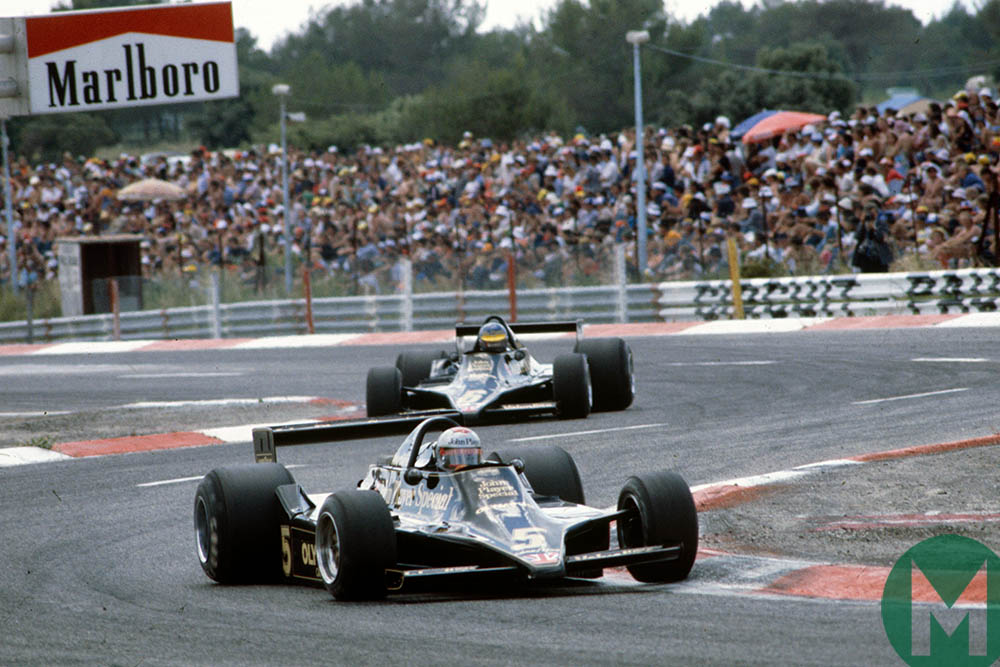 Two years later, Williams, Ligier and others had taken the Lotus’ ground effect ball and ran with it far harder than Lotus itself. Williams’ Alan Jones won at Ricard after tirelessly hunting down the Ligiers of Didier Pironi and Jacques Laffite, thanks to his taller 15-inch front Goodyears that stayed in shape longer than the smaller tyres on the French cars. It was a crucial victory in Jones’ title campaign in that it led two weeks later to Ligier losing a race (at Brands Hatch) it was dominating through hurriedly trying to adopt the taller front tyres and suffering leaking rims as a result – handing Jones another victory.

It was at Ricard in 1982 that René Arnoux disregarded a pre-race team agreement at Renault to hand the win over to team-mate Alain Prost if they were running 1-2. Arnoux won the race but in doing so signed his termination at the end of the year with Renault. A year later Prost was in dominant form from pole, but it would be his final victory for the team with which he shortly subsequently fell out and from which he was fired at the end of the year.

Sweltering heat is frequently a factor at Ricard and in 1985 it gave Nelson Piquet a rare Pirelli tyre advantage over Goodyear, allowing him to romp home for his final grand prix victory with Brabham.  Piquet had switched camps to Williams by 1986 but it was his supposed number two Nigel Mansell who blitzed the race from pole, a feat he repeated the following year. 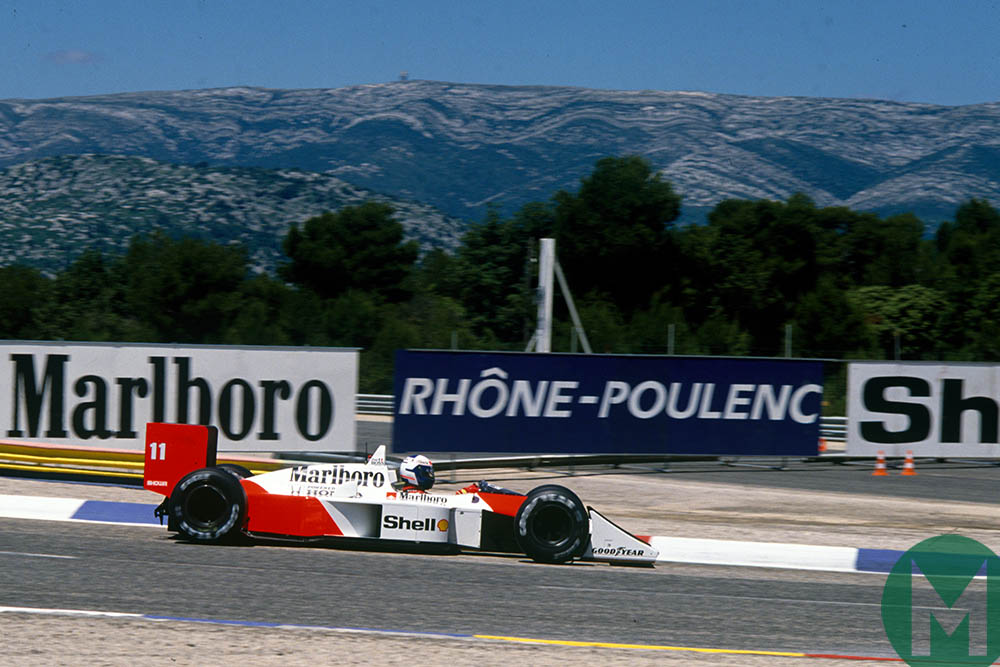 Prost more than had the measure of Senna in 1988 Photo: Motorsport Images

Prost was dynamite around this track and even paired against Ayrton Senna at McLaren in 1988 and ’89, he qualified on pole here both times. He won on both occasions too. In ’88 he was so confident that Senna wasn’t going to beat his time that he brought the car in with much of the session still to go, changed into civvies and watched very ostentatiously from the pitwall as Senna failed to match his benchmark. Senna would turn the tables to do the same to Prost at the next event, but on race day here Prost twice caught and passed Senna to win. In ’89 Senna suffered a mechanical failure on the first lap of the restart, leaving Prost no real opposition.

Feeling that McLaren wasn’t big enough for the both of them, Prost had left to join Ferrari for 1990 – and at Ricard secured victory, but only after a late misfire for the Leyton House of the non-pitting Ivan Capelli. This was an Adrian Newey design, though ironically he’d been fired from the team just prior to this race!

And so F1 moved on for almost three decades, the circuit never hosting the Schumacher era or the following Red Bull years, missing out on Lewis Hamilton versus Fernando Alonso along the way. Then, just like that, the hybrids whooshed into town and a new generation got to take Signes flat in top.