Drivers typically have just a single shot at Formula 1, or else none at all, but then there’s Pedro de la Rosa. Left without a race seat when HRT folded at the end of last season, the Spaniard is now a paid-up Ferrari employee. Quite a bonus when you’re about to turn 42, but scarcely a first: Juan Manuel Fangio was a couple of years older when he first contested a world championship Grand Prix for the Scuderia, at Buenos Aires in 1956.

It’s unlikely that de la Rosa will get anywhere near a race seat. Rather, he will join compatriot Marc Gené on simulator duty – and in that respect he’s a shrewd acquisition. He has dipped in and out of F1 during the 14 years since he made his race debut with Arrows, starting 104 Grands Prix for five different teams and recording a single podium finish, when he took his McLaren to second place in the 2006 Hungarian GP. At the time he was subbing for the NASCAR-bound Juan Pablo Montoya – and patience has been his trademark. He spent eight seasons as linchpin of McLaren’s test and reserve team, but methodology acquired there will be useful to both sides as he embraces a similar role with Ferrari. 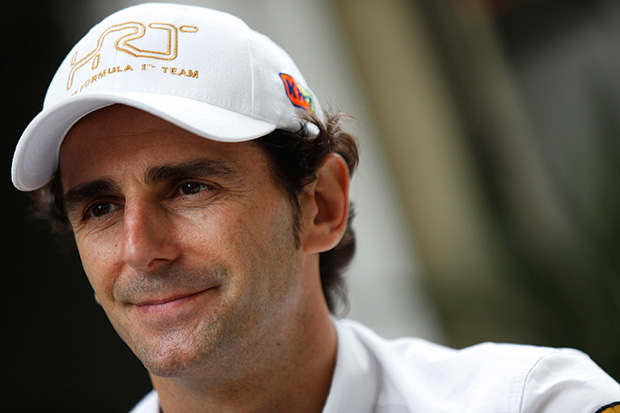 To put the Spaniard’s staying power in context, recent Sauber signing Esteban Gutiérrez had only recently celebrated his first birthday when de la Rosa underlined his potential by winning both British and European Formula Renault titles in 1992.

The two would have competed against each other this year too, had HRT not crumbled, because de la Rosa had a firm race contract. He was recruited to use his vast experience to guide the team and mould it into an effective unit, but ultimately its greatest need proved to be financial rather than technical.

It was a short-lived challenge he tackled with relish – never more so than in Monaco last May, where he described his qualifying lap as “without a doubt the best” he had ever completed around the principality. It translated to no more than 21st on the grid, between the two Marussias, but from where he was sitting it felt almost as good as pole – and his smile told you as much.

The spotlight tends to focus only on those at the front, but you’ll often find sunshine in the shadows.