Sergio Perez took a surprise debut pole for what will be his 215th race, spoiling what had been billed as a battle royale between Charles Leclerc and Max Verstappen, but still remained a thrilling and at times shocking qualifying session.

The Ferrari driver will start second tomorrow, his team-mate Carlos Sainz third, with Verstappen only fourth, as George Russell managed to wrestle his Mercedes to fifth.

Qualifying was halted for a lengthy period following a big crash for Mick Schumacher during Q2. The Haas driver hit the barriers heavily on the exit of Turn 10 and was taken to the medical centre for evaluation after being extracted from the car conscious.

Lewis Hamilton was an early shock story in the early part of qualifying, failing to make it out of Q1 on pure pace some 0.6sec down on team-mate George Russell. He will line up P16 for Sunday but could take power unit components which would mean a pit lane start. 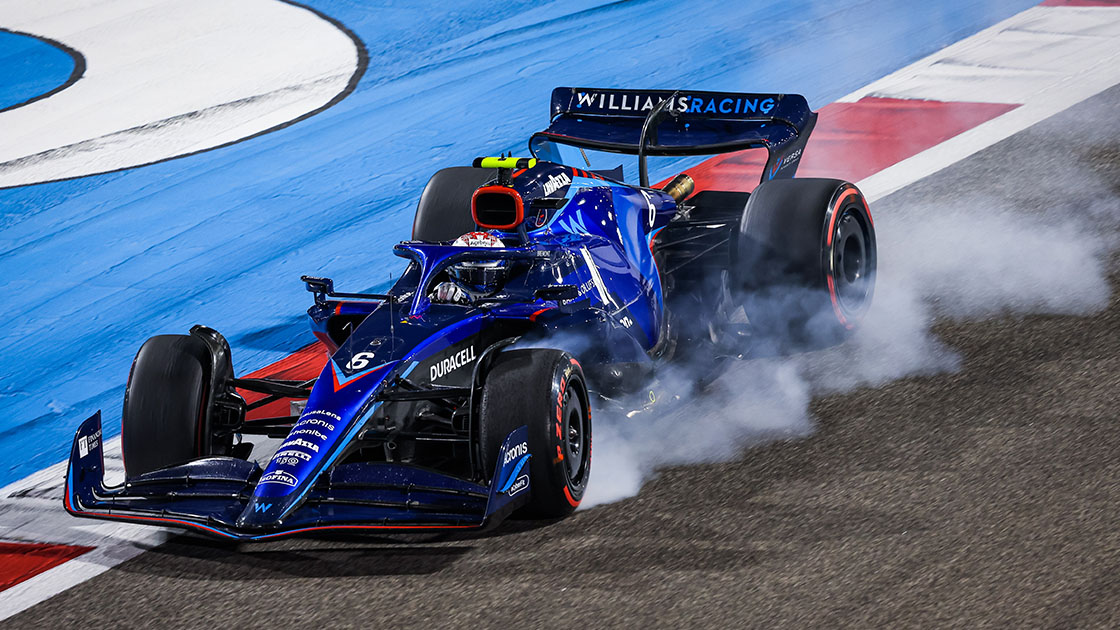 Haas led the way out in Q1, Mick Schumacher ahead of team-mate Kevin Magnussen as the lights went green at the end of the pit lane.

Lewis Hamilton and Mercedes team-mate George Russell both opted for medium tyres but Hamilton’s were far from ready for an attack lap. He was sideways through Turns 1 and 3 and backed out of his first effort of the night.

Ferrari was immediately onto soft tyres and flying. Both of its drivers were on course to set the fastest times of the session until a red flag was thrown for the crashed Williams of Nicholas Latifi. The Canadian had a snap of oversteer on the entry of Turn 13 and spun sideways into the barriers.

Fortunately he was unhurt and the car was quickly cleared allowing the session to resume with 11min 22sec left on the clock.

Hamilton couldn’t match his team-mate’s pace on the mediums but both Mercedes drivers went back out on softs.

Yuki Tsunoda’s qualifying hadn’t got going before he was told to box on his outlap due to a fuel related issue.

Max Verstappen looked to be on rails and was flying on his first effort. The 1min 29.330sec was comfortably fastest with eight minutes left. Without a red flag to stop them, Ferrari then took the top spots with Leclerc and then Sainz going top and immediately into the 1min 28s.

Mercedes meanwhile was in a worrying spot after Hamliton’s first time left him 13th in the order. Following cars behind completing their laps, the seven-time world champion was left in the drop zone, P16.

With under three minutes left on the clock, Hamilton was forced to stay out on the same set of softs and go for a third flying effort after failing to find an improvement on his second lap.

He could only manage 15th on his final lap and Lance Stroll was able to improve to knock the 2021 Jeddah pole-sitter out in Q1. 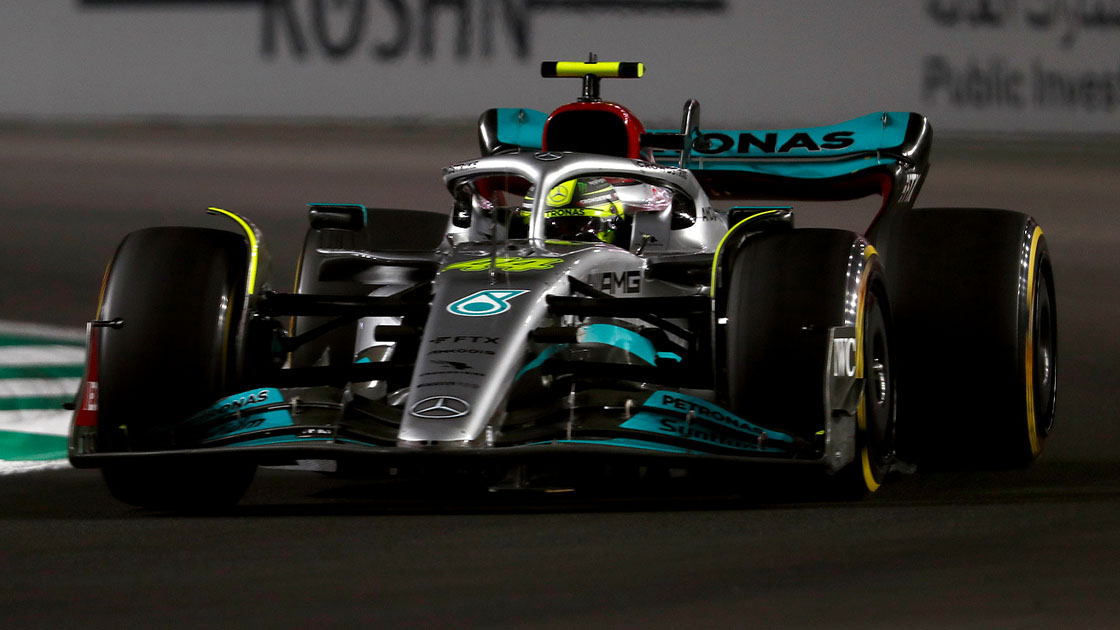 Hamilton was the shock exit from Q1

Schumacher led the pack out once again from Magnussen, who was under investigation for an unsafe release during Q1. The younger of the Haas drivers got the better lap on the first attempt to set the time to beat.

Leclerc could only oblige and then some, a 1min 28.883sec was easily the fastset time, almost a second clear of Russell on the mediums in P2. Laps from Sergio Perez, Sainz and Fernando Alonso bumped the Mercedes down to fifth.

Verstappen’s first lap of the session was a fraction off of his team-mate’s time to put him third, but the gap to the leader was slender, with just 0.062sec covering the top three.

Esteban Ocon was less than impressed by Daniel Ricciardo after the McLaren driver blocked the Alpine at Turn 7 with the Frenchman on a hotlap. It was placed under investigation for after the session. 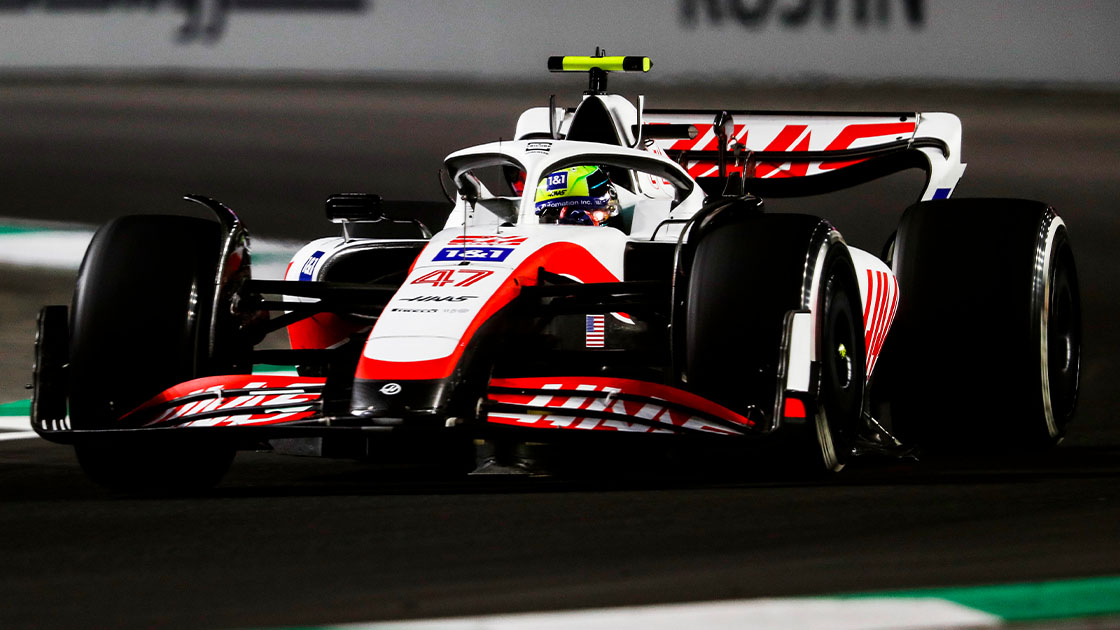 A huge accident for Mick Schumacher saw another red flag, this time in Q2

A second attempt for Schumacher didn’t go according to plan. A bounce over the kerbs on corner entry unsettled the Haas and sent it hard into the wall at Turn 10, bringing out the red flags once again. Schumacher remained in the car as the medical car arrived on the scene but was talking over the radio to his team. He was extracted out of the car fully conscious and taken to the medical centre for further evaluations.

Once the green flag returned, drivers scrabbled to get into Q3, with Norris setting a 1min 29.651 lap but it wasn’t enough to keep him in the top ten – he’ll start 11th tomorrow.

Ricciardo was behind Norris, a 1min 29.773sec putting him 12th on the grid. Zhou Guanyu was 13th, half a tenth off the Australian, with Schumacher and Stroll 14th and 15th respectively.

George Russell just squeaked into the top 10, besting Norris by 0.033sec, with Ocon and Magnussen also making it through in ninth and eighth respectively.

Sainz would ultimately set the fastest time of the session with a 1min 28.686sec, as team-mate Leclerc ended up a tenth off. 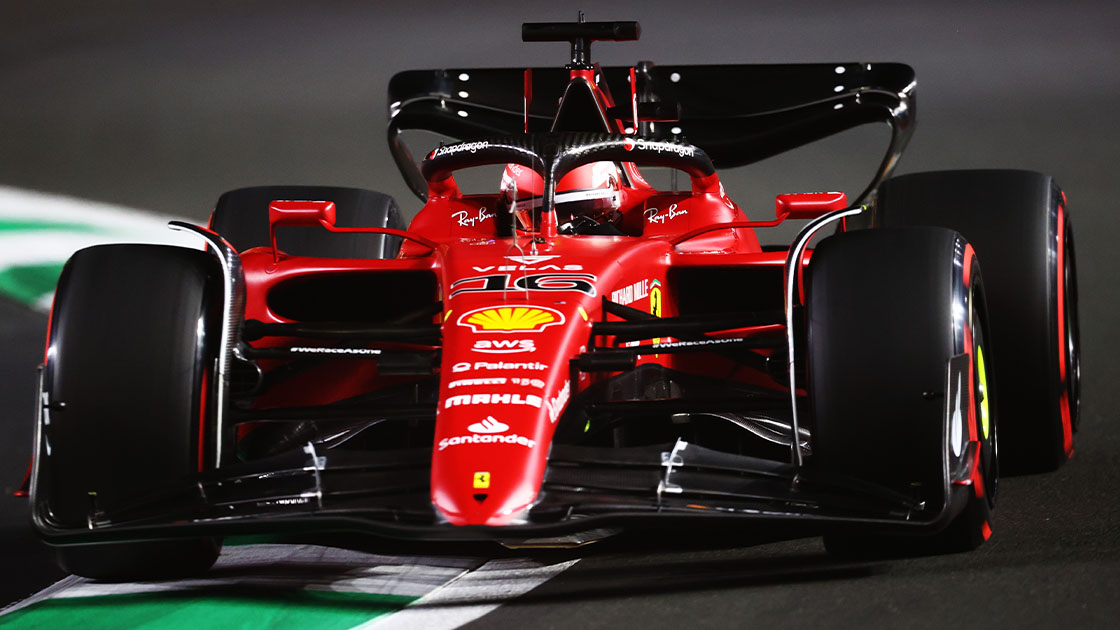 Leclerc looked on for pole until beaten by Perez

The final session saw Leclerc head straight out, Verstappen and Sainz following closely. The Dutchman opted to go for another warm-up lap, whilst the Monégasque went straight onto a fast run, as did Sainz.

Leclerc posted 1min 28.446sec to go quickest, but was immediately beaten on used softs by Sainz who set a 1min 28.402sec.

Perez then posted a 1min 28.554sec to go third, whilst his Red Bull team-mate Verstappen was labouring – a lap 0.837sec off Leclerc left him seventh after the first runs, complaining “Mate, what the f***, I have absolutely zero grip on this tyre,” over the radio.

Russell looked more assured than in previous sessions, going fifth. The Alpines appeared positive at this point – Ocon’s time was good enough for fourth, whilst Alonso was sixth.

The Spaniard was soon displaced by a flying Finn though, as Bottas moved ahead.

It all then came to a head on the second runs: Leclerc went top briefly with 1min 28.225sec, but Verstappen could only go fourth, 0.261sec off, whilst Sainz couldn’t improve either – but one Mexican could: Sergio Perez.

The Red Bull driver went quickest after posting a 1min 28.200sec, screaming over the radio in delight after taking his first pole on the 215th time of asking.

An impressive Ocon remained fifth, with Russell in sixth. Alonso was in seventh after improving slightly with a 1min 29.147sec, as Bottas ended up eighth, after shaving six thousandths off his previous time.